Meet The Couple Behind Instagram’s Hit Travelogue at my blog

It’s been a bumpy road for underground techno promoter Heart Beat Saigon since its first event back in 2012 at the now defunct Red Bar on Ngo Duc Ke Street in Ho Chi Minh City’s District 1. Securing appropriate venues to stage events has been (and remains to be) a challenge, not least finding somewhere to put down roots and call home.

Heart Beat is about classic underground techno. It’s comprised of a collective of international DJs from Germany, Thailand, France and Vietnam with sounds ranging from minimalist Detroit grooves to energetic Euro tech house.

Ever since, Heart Beat has enriched the live music scene in Ho Chi Minh City (and Vietnam) with its eclectic selection of what it has curiously dubbed “underground body music”. At the same time, Heart Beat has managed to become promoters (it has brought names like Par Grindvik, Marc Romboy, Antigone, Shifted and Henning Baer and others to Vietnam’s shores), nurturers of the city’s underground techno community, and more recently developed its own label — Pink Room Records.

They were indeed humble beginnings for the duo who started Heart Beat. Red Bar was more notable for darts and pool featuring Filipino bands on Friday and Saturday evenings performing rock and adult contemporary covers (think Hotel California) that are still the mainstay of AM radio to this day — hardly the ripe conditions needed for the incubation of the kind of non-mainstream movement Heart Beat was setting its sights on.

While not that long ago — just over five years — it was also at a time when organising events came with perhaps greater risks than they do now. This was due in part to the complexities involved in negotiating with venue owners and authorities. There was always concern that an event would be shut down at the eleventh hour. The lads were always up against it.

Following Red Bar, Heart Beat took up residency at Queen Bar around Le Than Ton Street at the “Japan Town” end of the street in District 1, where the collective was able to make itself at home. Queen Bar slowly became the incubator of underground electronic music in the city that Heart Beat had hoped for until it too, closed down.

Then came Q4 and The Observatory; venues that reflected the growth in popularity of non-mainstream music in Vietnam. With these much larger venues, Heart Beat was able to attract big name acts and draw large audiences, all the while continuing to support local and foreign emerging artists.

Q4 and The Observatory enjoyed an exceptional run until their forced closures in 2017 due to impending redevelopment of the area, leaving a large void in the scene and a headache for Heart Beat.

However, things are about to change for the better.

Heart Beat has found a new venue in Ho Chi Minh City thanks to French brothers Goss & Flow (pictured above) from Asian Rave Connected Ltd. (ARC Ltd.), who are about to hold the official opening of ARCAN, their new underground entertainment venue in an alleyway off Dien Bien Phu in Binh Thanh District this coming April 13.

Launched in June 2017, ARC Ltd. aims to promote underground techno culture and other ‘subcultural’ music genres, such as psy-trance, techno, drum and bass, and is a welcome addition to the underground music scene here. Heart Beat has been instrumental in things coming together.

For the grand opening of Arcan, Heart Beat has been given the honour of selecting the first ever line-up for the new venue which will celebrate with a special three-day rave party (yes, that’s three days!) kicking off on the Friday night with NTHNG (Netherlands), EUROPA and MOHAMMED AL HAMZA (Germany), Chris Walter (Heart Beat) and VISUALS by EROL (Heart Beat).

This will be the 32nd instalment of Heart Beat on a weekend that promises to be another watershed moment in Vietnam’s underground techno scene. Given Heart Beat’s humble beginnings and the line-up (see below), it will be one not to miss. 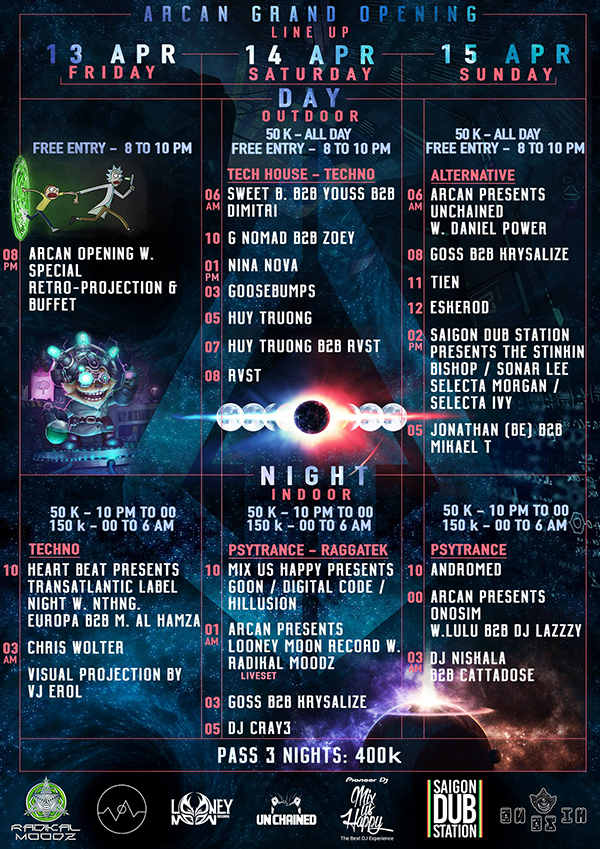