So Damn Pho-king Good. Some Of Saigon’s Best Pho

It gets hot, wet and dirty, not to mention loud, very loud. All of which you are likely to experience on a trip here just about any time of year.

So what’s here to do?

Anyone can pick up a guidebook or go online to research a city’s history and its big ticket attractions — Ho Chi Minh City has a few.

You’ll find out the best time to visit Reunification Palace, arguably Ho Chi Minh City’s most intriguing building with a history to match — a most iconic site forever inextricably etched into our collective consciousness with its link to the end of the war in 1975.

Slip into the nearby War Remnants Museum as well and try to understand why Vietnam became a war above a nation of stoic but friendly people with a distinct culture from the rest of the Southeast Asian nations.

You could go old school and send a postcard from the Central Post Office right after you’ve poked your head inside the Notre Dame Basilica, perhaps one of Ho Chi Minh City’s most recognisable landmarks along with the 262.5m Bitexco Tower (with helipad in a no-fly zone) resembling the shape of Vietnam’s national flower, the lotus.

But, it has now been superseded by the gargantuan Landmark 81, which stands at 461.5m just on the edge of the city centre.

Ho Chi Minh City is on the move.

And finally, you could allow yourself to get suckered into taking a cyclo by their uber-charming drivers, only to risk getting stuck in the city’s notorious traffic jams in the blistering heat of the day.

Well, how about this?

You can start a walking tour anywhere, but for convenience, we suggest from the Liberty Central Saigon City Point Hotel in the heart of the city because it’s pretty easy to find.

There isn’t one, just do it in the morning to avoid the heat and afternoon downpours.

Ditch the hotel breakfast. We know you’ve paid for it already, but at least try what the locals eat first thing in the morning most days of the week.

Nothing is more authentic for breakfast than pho. Down a narrow alley to the side of Liberty Central is Pho Minh.

Open since the 1950s, Pho Minh’s is typical of the flavour of pho in the southern parts of Vietnam.

Marvel at how quiet it is in the alley just metres from busy Pasteur Street. Don’t have a caphe sua da just yet — there are plenty of opportunities enroute.

But do drop into The Old Compass Cafe in the same alley if you’ve got the time, you might want to book a guided tour with them. 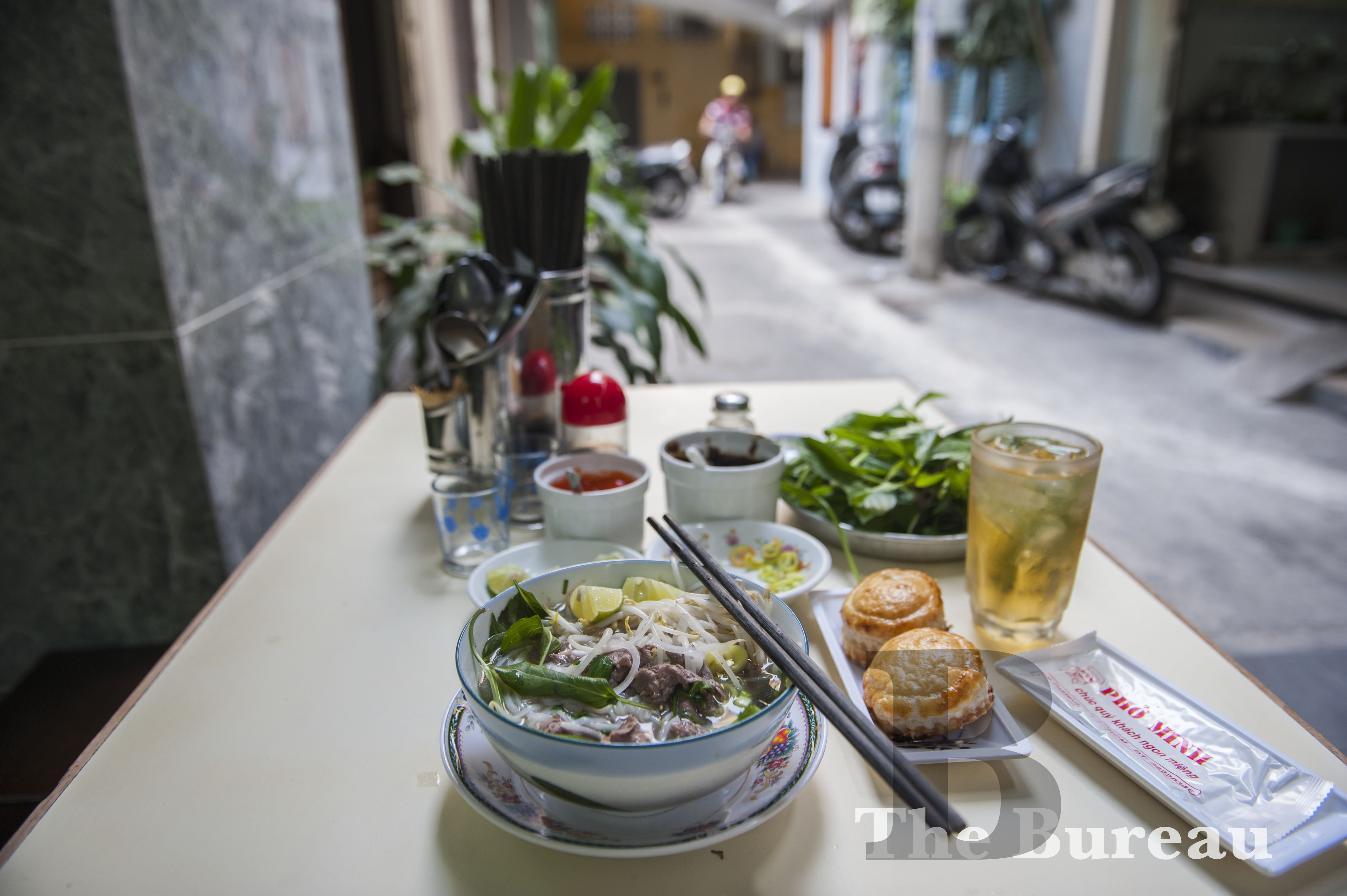 Today, the library represents one of the city’s finest examples of Modernist architecture, designed by two local architects and opened in 1971.

But the site has a sinister past.

During the French colonial period, it was the site of the notorious Maison Centrale de Saigon (prison) and later Chi Hoa Prison, which stood here until 1961.

It’s also where Ly Tu Trong, a founding member of the Ho Chi Minh Communist Youth Union and who the street is named after, was executed. There’s a small bust of Ly Tu Trong standing in the grounds commemorating his sacrifice to the nation. 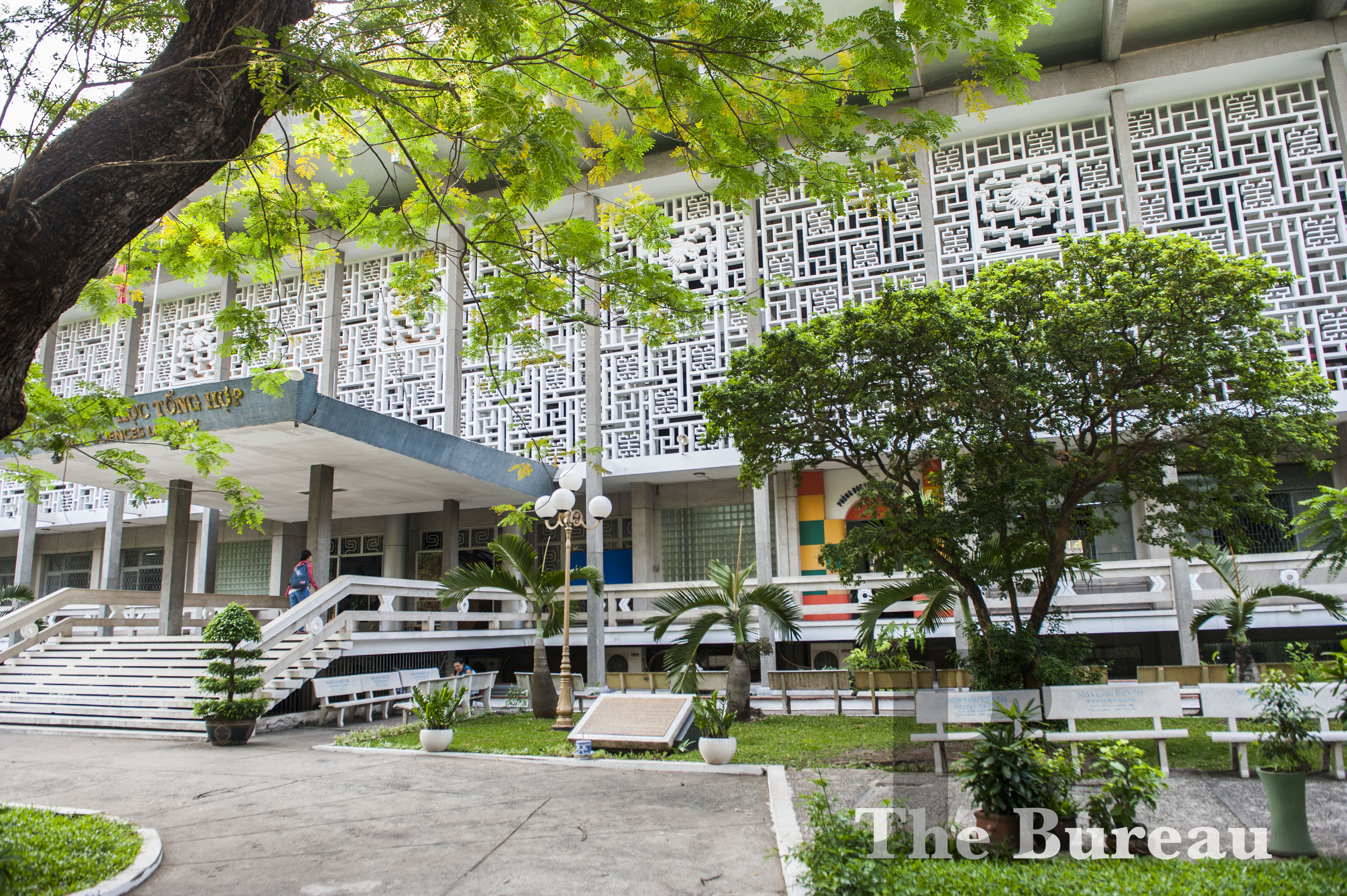 Back across Pasteur Street and a block further along Ly Tu Trong Street is Dong Khoi Street. Much of Graham Greene’s novel — The Quiet American — was set here.

The intersection of Ly Tu Trong and Dong Khoi Streets is much more than where two busy thoroughfares meet.

Rather, it’s the confluence of time in this city’s colourful history.

On one corner is a government office and university in the building which was once the General Sciences Library before it moved to its current location.

Diagonally across from this is Vincom Shopping Mall, seen by some as a symbol of Vietnam’s progress; by others, an eyesore resembling a giant Lego figurine buried headfirst into the ground with its legs sticking up into the air.

Go and see what you think.

But perhaps the most significant landmark here is at 22 Ly Tu Trong, the CIA building during the war and the location of that frantic final evacuation by helicopter as Saigon was about to fall.

Stand diagonally across from Cong Caphe on the sidewalk and look up. You can still make out the small building in that famous photograph by Hugh Van Es. 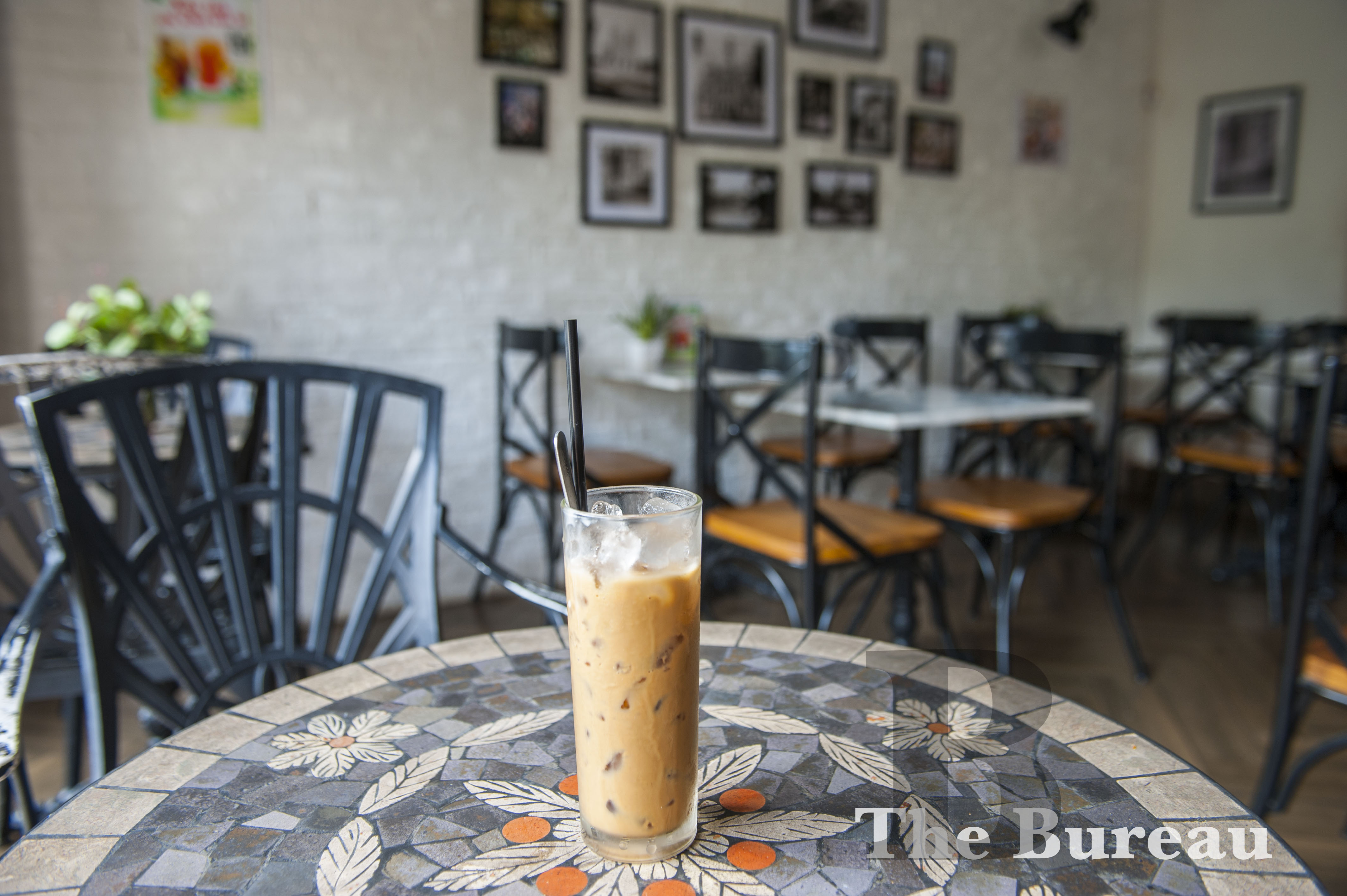 This city has coffee running through its veins, so there’s no shortage of places for a fix.

From vendors riding bicycles and motorbikes to street-side stalls with small plastic chairs to coffee shops big and small, you’re bound to find a good one if you keep your eyes peeled.

One place worth checking out is The Loft Cafe.

There are two on this route.

The one at 95 Pasteur Street (pictured above) has access via a courtyard and two flights of stairs in a French colonial building.

While the cafe is modern, the journey getting there gives you an insight into a more typical way of life off the street.

For something a little more quirky, try Cong Caphe on the corner of Ly Tu Trong and Dong Khoi Streets.

This chain of coffee shops from Hanoi has captured the imagination of the younger generation, partly because staff are kitted out in military-style uniforms from the north, partly because of its coconut coffee.

The cafe is the perfect vantage point for watching the traffic and looking down along historic Dong Khoi Street towards the river. 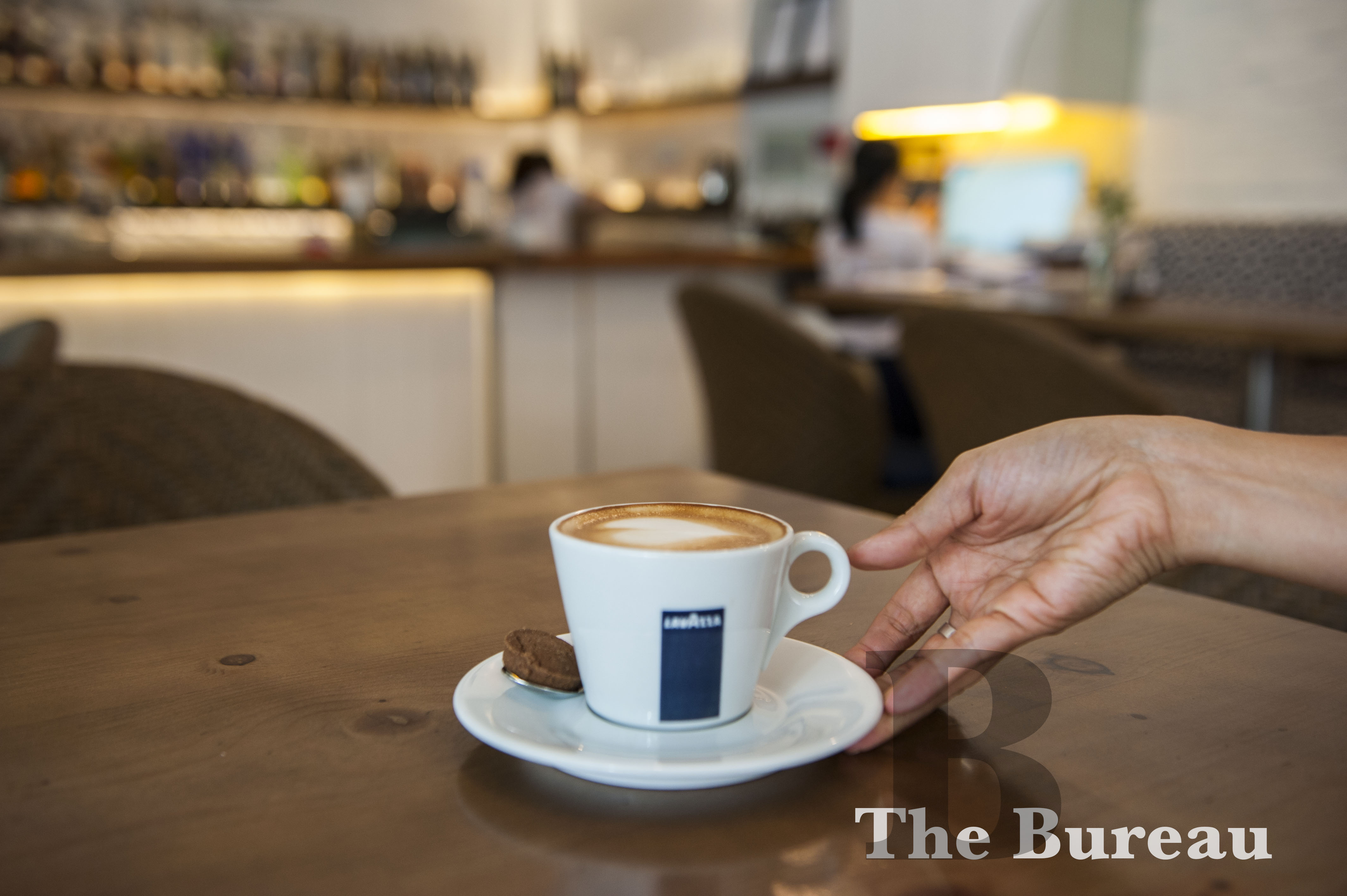 Another cafe further along Dong Khoi Street is Jaspas (pictured).

Recently renovated, Jaspas has been a mainstay on Ho Chi Minh City’s coffee trail for well over a decade.

Here a small latte will cost VND71,000 (US$3.10), and it’s a comfortable place to grab a small bite to go or sit down for some lunch and cool down for a while.

Before you get to Jaspas, however, you’ll pass a number of historic buildings including Hotel Continental Saigon (pictured below), the Municipal Theatre (aka The Opera House), and the legendary Caravelle Saigon Hotel, home to the legion of news correspondents during the war.

Pop up to Saigon Saigon Bar on the roof and get a feel for the history of the city, but at the same time come to grips with its rapid development. 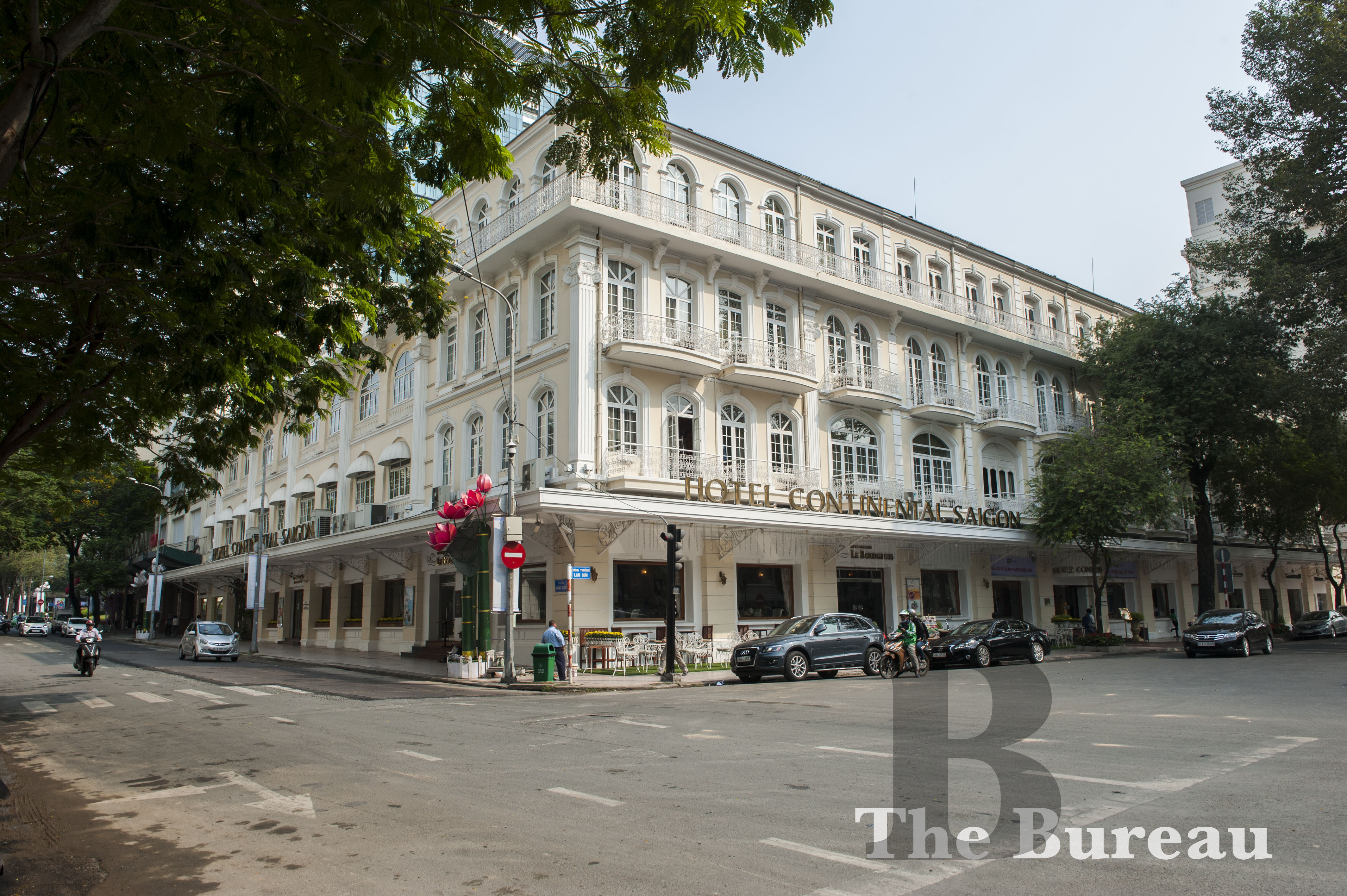 A River Runs Through It

In the second half of 2017, Ho Chi Minh City got its first water bus service.

Currently there is only one route, but there are plans for more. Tourists are welcome to ride the water buses which depart from Bach Dang Pier on Ton Duc Thang Street in District 1.

Timetables are subject to change, so check in at Saigon Water Bus for the latest.

This is one of the best (and cheapest) ways to see Ho Chi Minh City from the water, especially as the route passes through residential areas that you wouldn’t normally see by road or on foot. 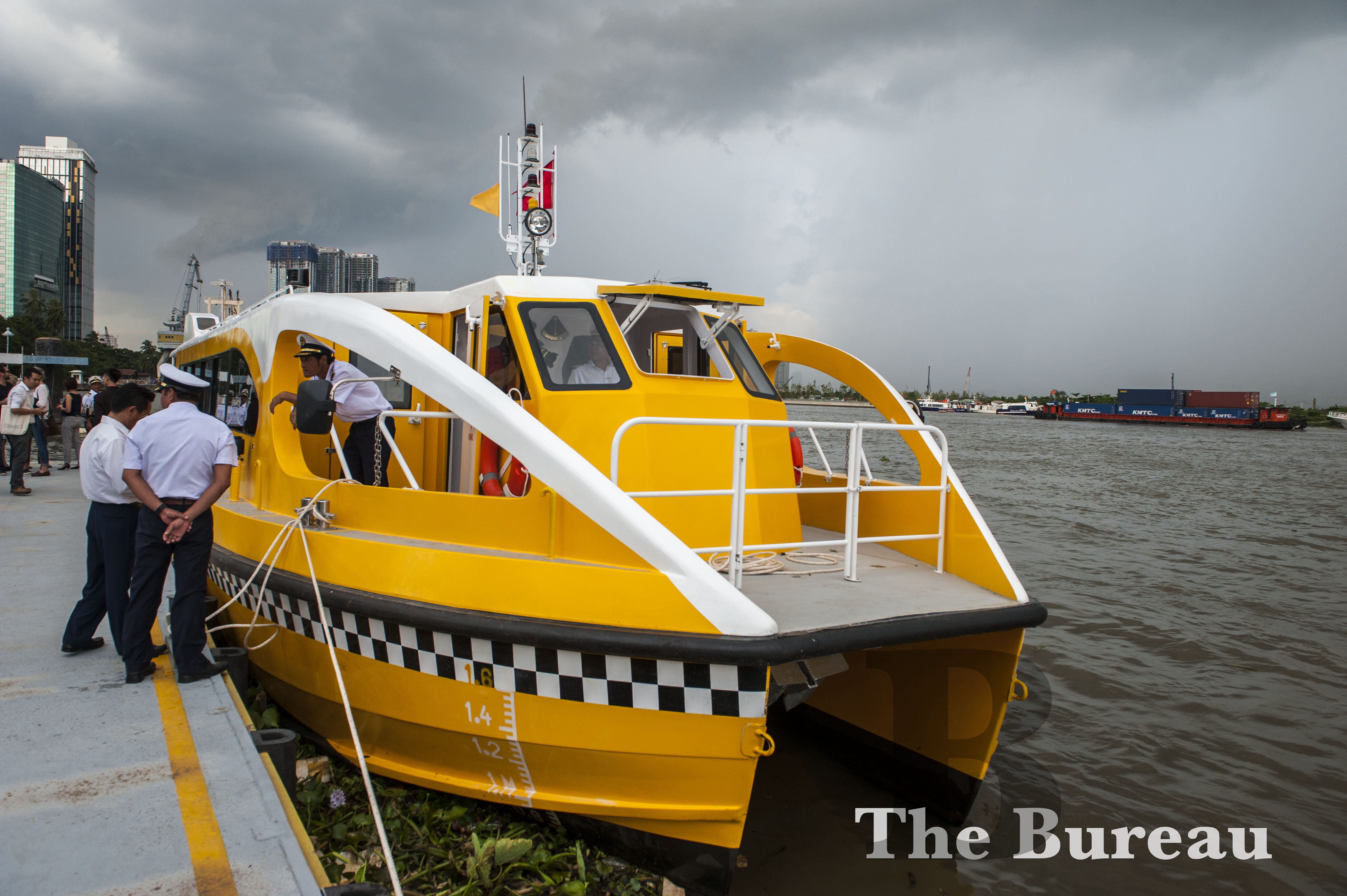 Once back on land, it’s time to get a bird’s eye view of how much Ho Chi Minh City is growing up, literally and figuratively.

From Bach Dang Pier, walk back along Ton Duc Thang Street, past the Renaissance and Majestic Hotels to Nguyen Hue Street and on to Ngo Duc Ke Street, the location of Bitexco Tower.

This remains one of the best places to see Ho Chi Minh City from the sky. If you’re thirsty, grab a beer at the Heineken Bar while you’re up there. 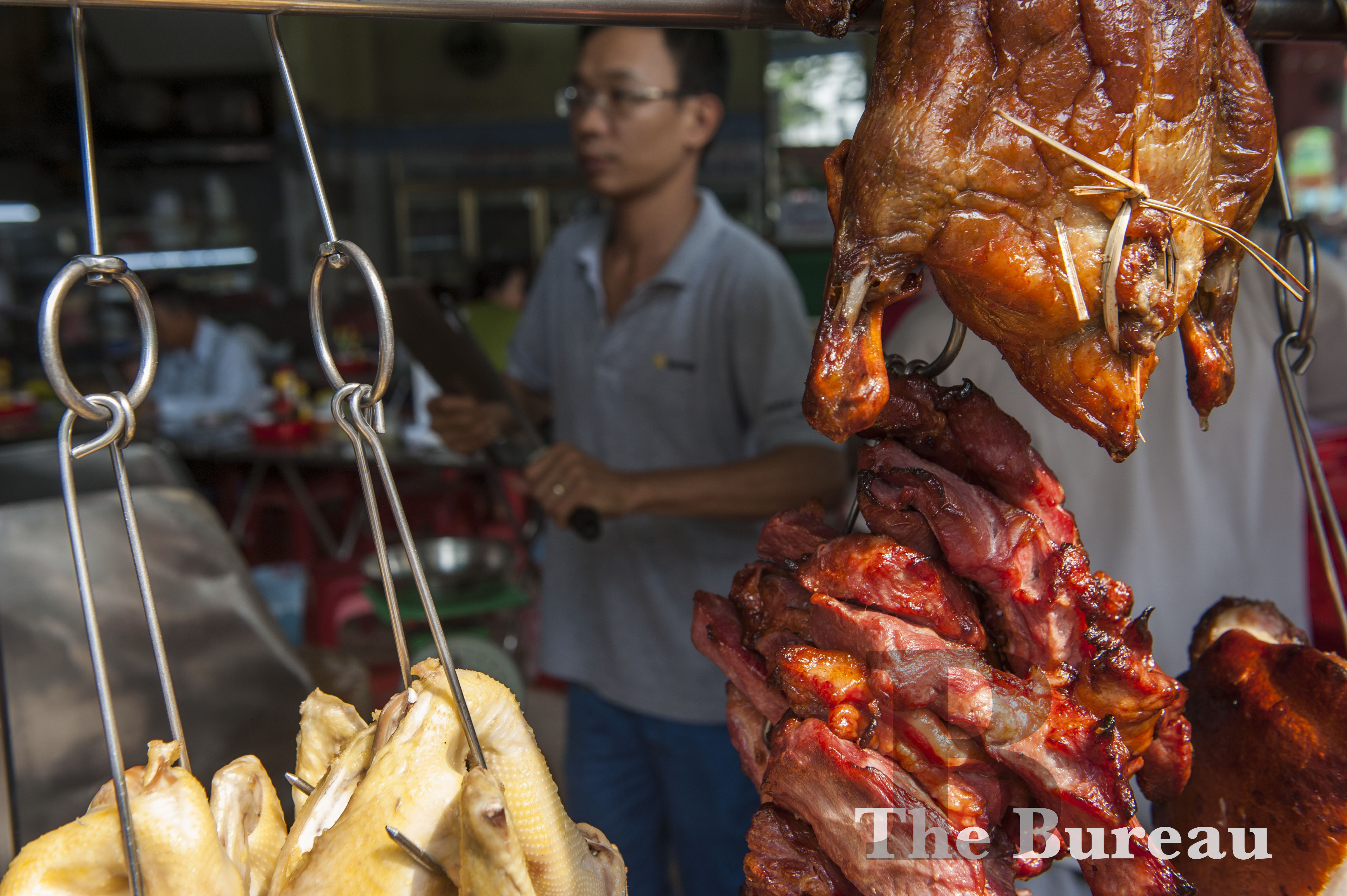 Across the street from Bitexco Tower is a Ho Chi Minh City institution — Nhu Lan Bakery.

By this stage, you’ll be feeling peckish, so this is the place to try out some more local food.

Pick up a banh mi to eat along the way, or sit down for a mi hoanh thanh (wonton noodle soup) over a refreshing glass of rau ma, a local juice famed for its cooling properties.

If that isn’t enough food, head down Ham Nghi Street to Ton That Dam Street just a block away and walk through Ho Chi Minh City’s inner-most wet market that sells everything from meat and fish to fruit and vegetables and other kinds of delicacies.

To see the market in full flight, be sure to get there in the morning. It’s a fascinating insight into what happens at the other hundreds, if not thousands, of wet markets like it throughout Vietnam. 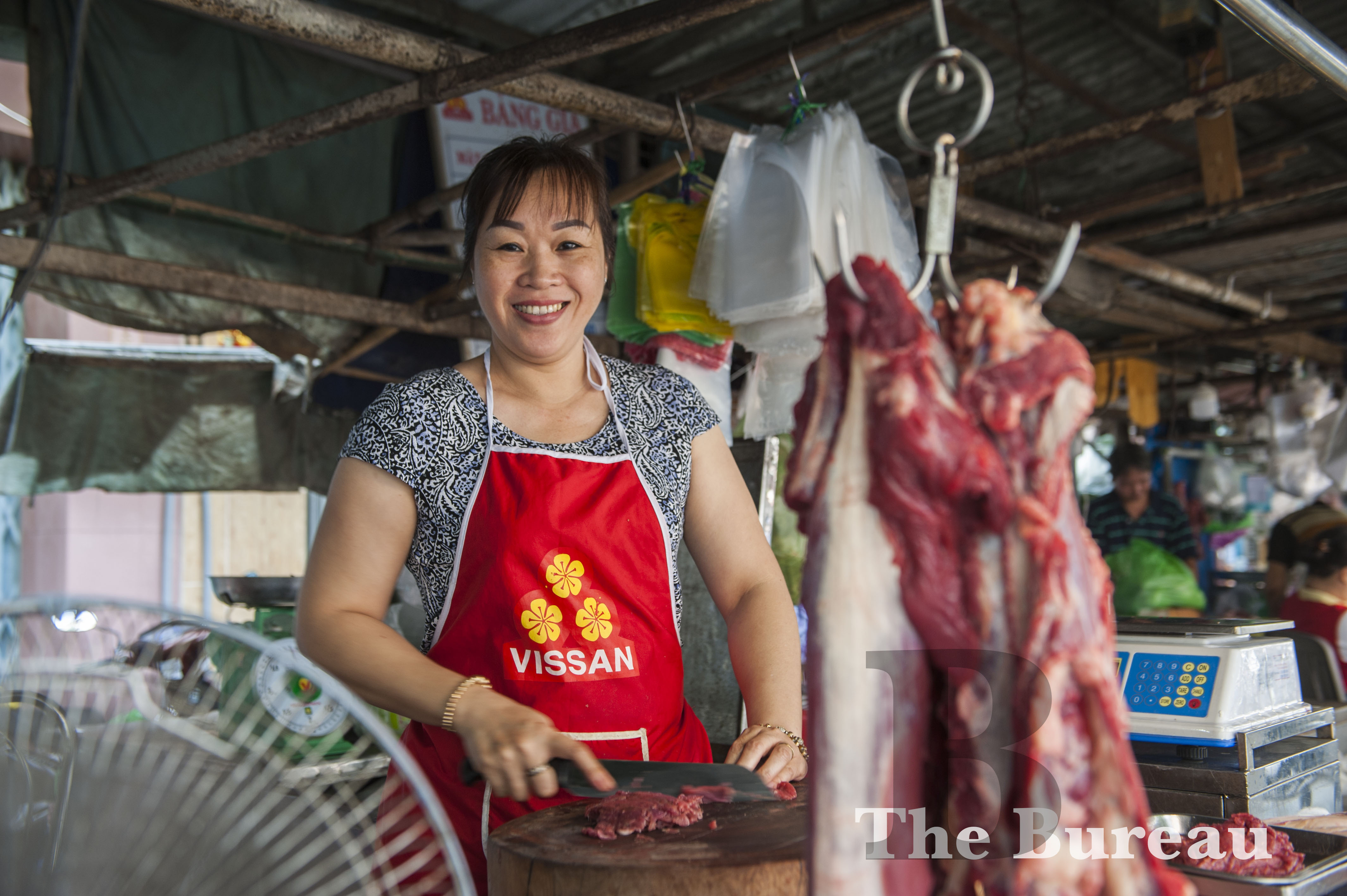 By now you will have noticed that Ho Chi Minh City is about the food.

While a highlight of any walking tour is the street food and markets owned and operated by the locals, there is a growing number of foreign-owned bars, restaurants and cafes enjoying the city’s renaissance.

Housed on the second floor of a classic colonial-era building, Villa Royale is a delightful tea room beautifully furnished with European antiques, of which most are for sale. 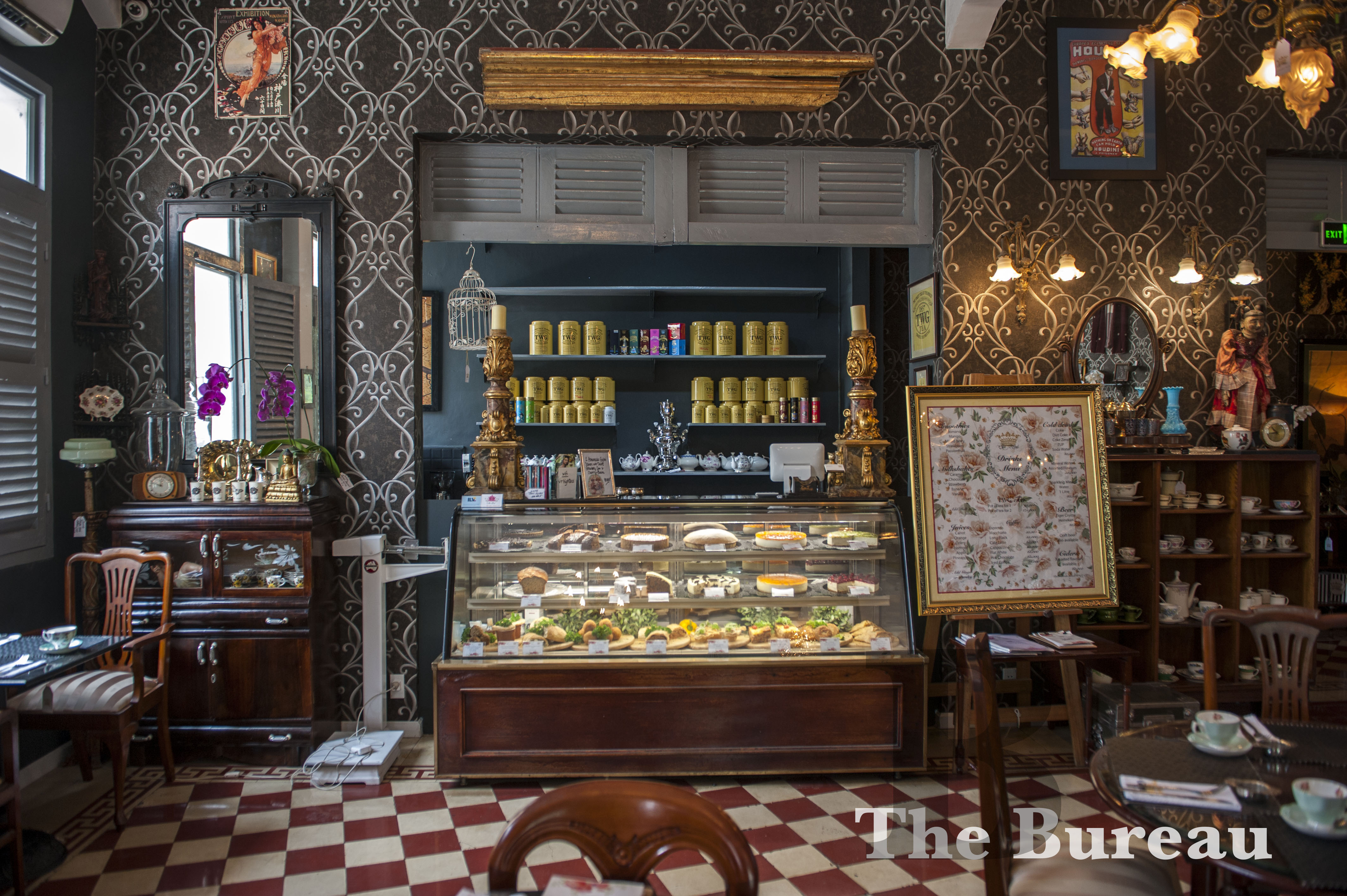 The Old & The New

Now that the foodies have been well and truly satisfied, it’s time to keep the petrol heads happy with a small collection of vintage motorcycles dating back to the early days of the Cold War.

At Biker Shield in a small alley off Nguyen Cong Tru Street, catch a glimpse of the new Vietnam that is driven by the boundless energy of the nation’s youth.

Biker Shield is a cafe, bar, restaurant and home for lovers of motorcycles and accessories over two floors with a small outdoor patio where you can enjoy a craft beer and a tasty, inexpensive set lunch for VND120,00 (US$5.30). 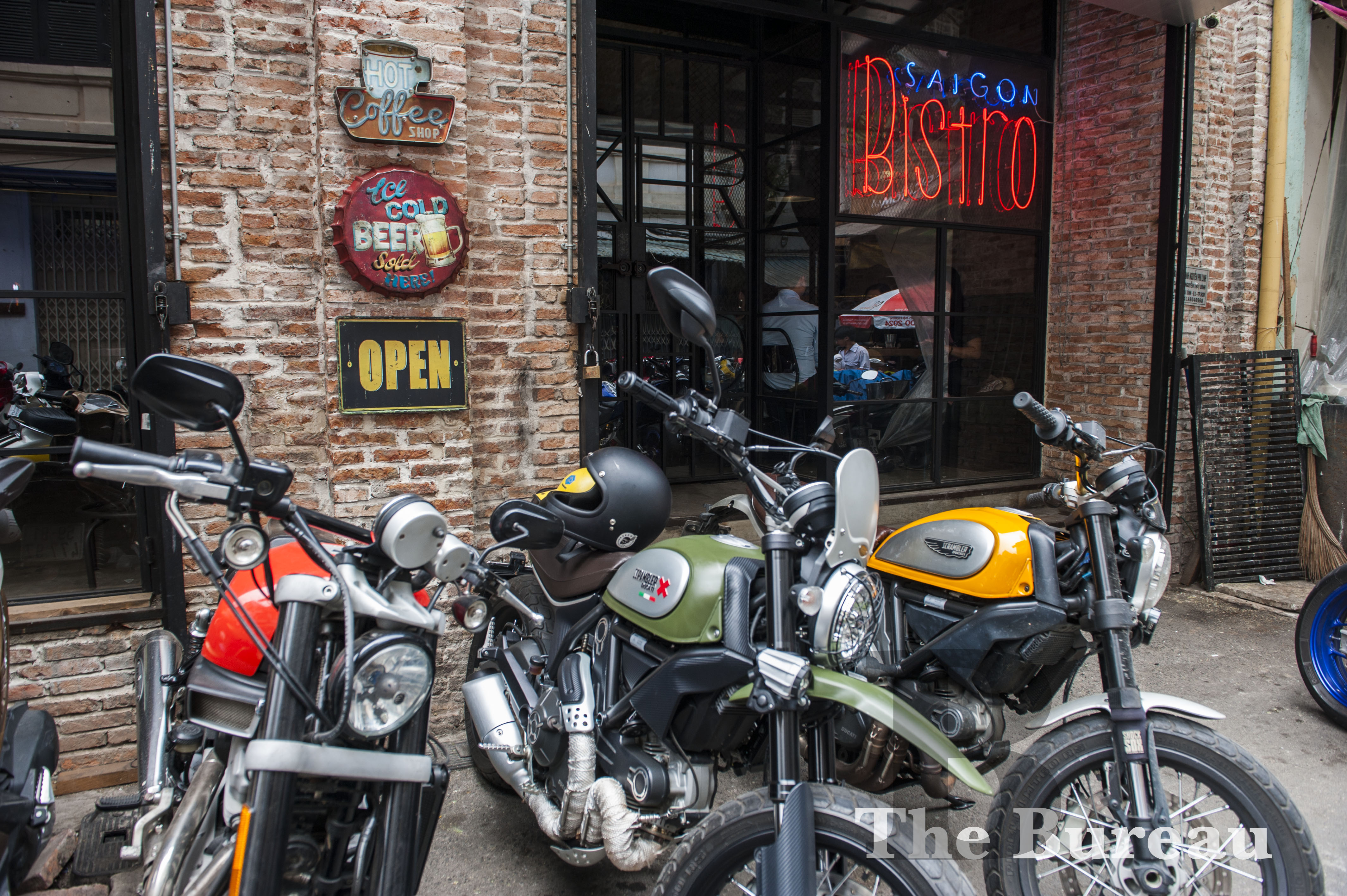 At barely 300 metres-long, Le Cong Kieu Street is worth a rummage along. You never know, keen fossickers may just find an elusive piece of treasure amongst the many fakes on show.

Right across the street is the HCMC Fine Arts Museum (entry VND10,000 / US$0.44) that showcases mostly local contemporary works, and oddly, one of Ho Chi Minh City’s oldest lifts from the building’s past life as a residence for one of the city’s elite from the 1920s.

From Le Cong Kieu Street, Ben Thanh Market is just a stone’s throw away for souvenir shoppers looking to get a last minute gift for family and loved ones, after which, Liberty Central Saigon City Point Hotel — where the trail started — is a short stroll away.

For more information on the locations featured in this article or on other locations in Ho Chi Minh City, don’t hesitate to contact us here or here