It’s hard to believe Heart of Darkness Brewery is coming up to just its second birthday this October. It feels like they have been with us forever.

Since the first hoppy drops of Kurtz Insane IPA — their flagship beer and runaway success story — splashed into the bottom of our beer glasses back in 2016, the brewery has made quite a name for itself both here and abroad. In large part it’s been due to their prolific brewing, but mostly because of an unwavering commitment to brewing exceptional, consistent and innovative beers.

Over 180 different styles of beer have been brewed at Heart of Darkness in the past two years — quite phenomenal when you consider the origins of the brewery. Their Ly Tu Trong Street taproom in the centre of Ho Chi Minh City is a far cry from founder John Pemberton’s living room where Kurtz Insane was born.

How he got away with tinkering with recipes and the smell of brew kits bubbling away in his residential apartment building without being evicted is anybody’s guess, but we’re glad he did! 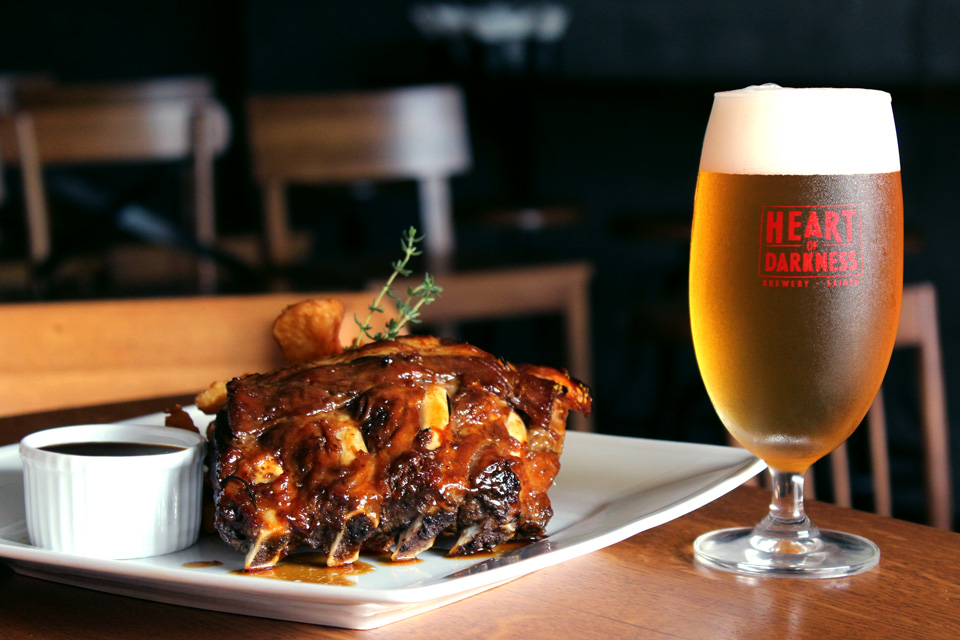 His baby, Kurtz, along with the rest of his brood, like Loose Rivet New England IPA and Dream Alone Pale Ale, among others — now flow from 20 taps at HoD HQ in the city’s central area, District 1.

But it’s not all just about the beer. HoD places emphasis on customer experience with food being an integral component

There’s always a range of 10 core beers and 10 rotating seasonals on tap, including limited releases and collaborations aplenty with notable brewers from Australia (Little Creatures) and the US (Evil Twin Brewing). Their draught beer is served at most taprooms across Vietnam and regionally, including in bottles at bars, restaurants and pubs. Tokyo, Bangkok and Singapore are recent additions to their portfolio with new locations always in the beer line.

But it’s not all just about beer. HoD places emphasis on customer experience with food being an integral component. With their new chef — Vinh Ton That — they have just released a new food menu to complement the brewery’s bold and ever-evolving beer offerings. 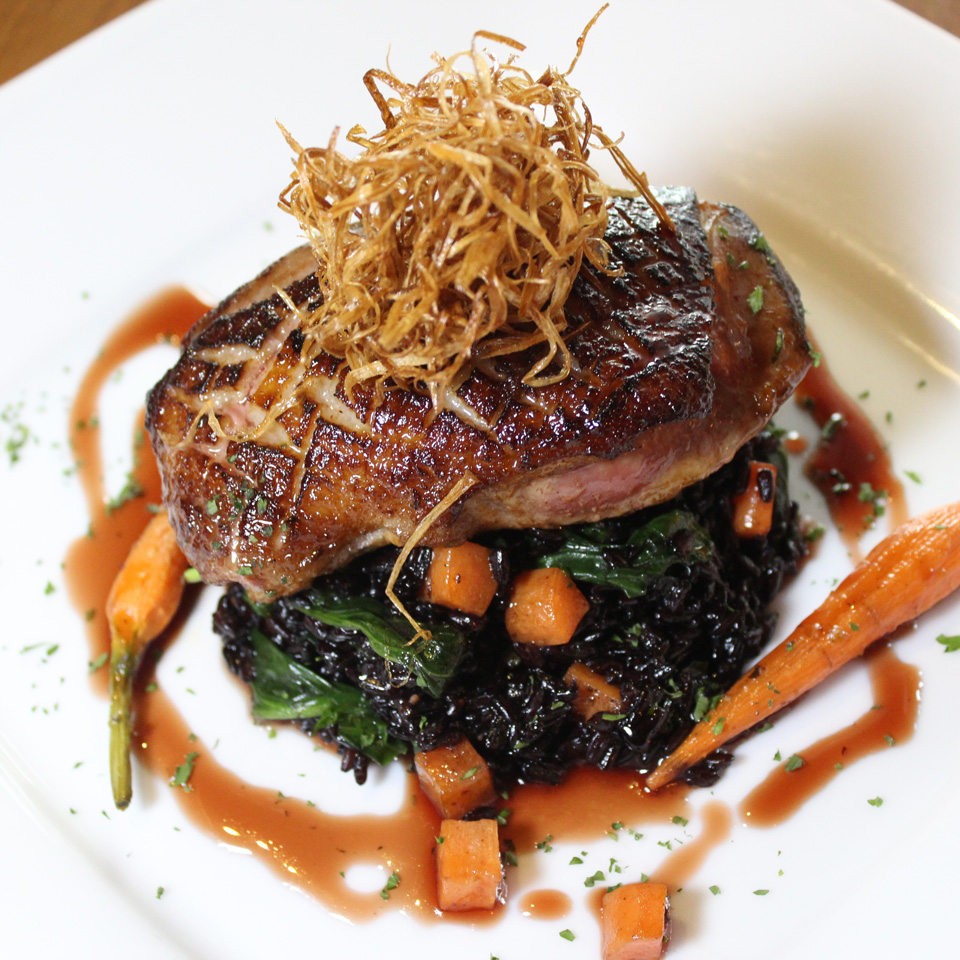 Vinh, who grew up in Sydney, Australia, apprenticed in fine dining before spending considerable time at Fuel Bistro & Wine, MG Garage, Swiss Grand and Sheraton Sydney. Since moving to Vietnam in 2009, he has worked the length of the country from Hanoi to Ho Chi Minh City but has now found a home at HoD.

“I came here and tried the beer and loved it,” he says. “Being a chef is much like being a brewer, creating things, playing with flavours, which is very interesting.

“Heart of Darkness is all about bringing exceptional quality US-style craft beer to the people of Asia, in turn, I’ve created a menu that combines Western and Vietnamese favourites to appeal to locals and foreigners alike.”

Although there have been changes to the menu, Vinh has wisely chosen to keep bar snacks prominent. In fact, there are 20 of them ranging in price from VND65,000 for the Edamame Beans, boiled and seasoned with salt and lime, to VND320,000 for a dozen chicken wings done in a choice of three ways: Vietnamese style with caramelised fish sauce, teriyaki or buffalo. His Killer Truffle Oil Fries for VND150,000 with parmesan cheese and herbs are, well, killer. 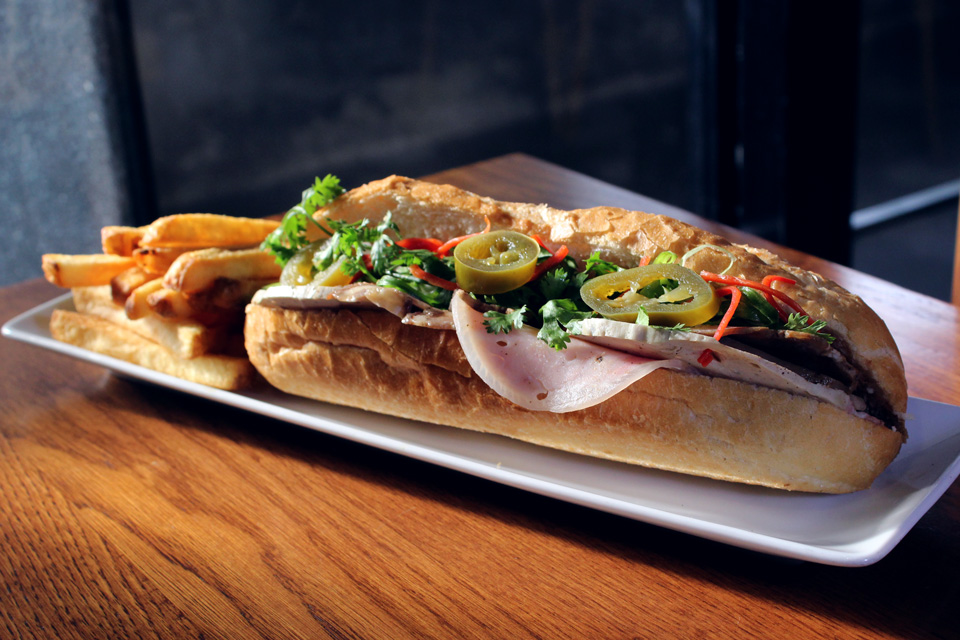 Pasta and flatbreads (topped with options like goat’s cheese, artichokes, kalamata olives, prosciutto, anchovies, mozzarella) make it onto HoD’s menu for the first time, with favourites like fettuccine with chicken, spinach and pesto (VND275,000), tagliatelle with salmon, green beans, tomatoes, dill and lemon (VND300,000) and a classic spaghetti with tomato roasted meatballs for VND300,000.

The new menu is available now at the Heart of Darkness taproom with a selection of items available for delivery on Vietnammmm.com soon

There are five salads to choose from ranging in price from VND190,000 for a classic Caesar to VND260,000 for a grilled tiger prawn salad. From the grill, prices range from VND350,000 for an Australian sirloin to VND1.5million for the HoD Gourmet Meat Board with pork ribs, lamb chop, sirloin and ribeye steak. 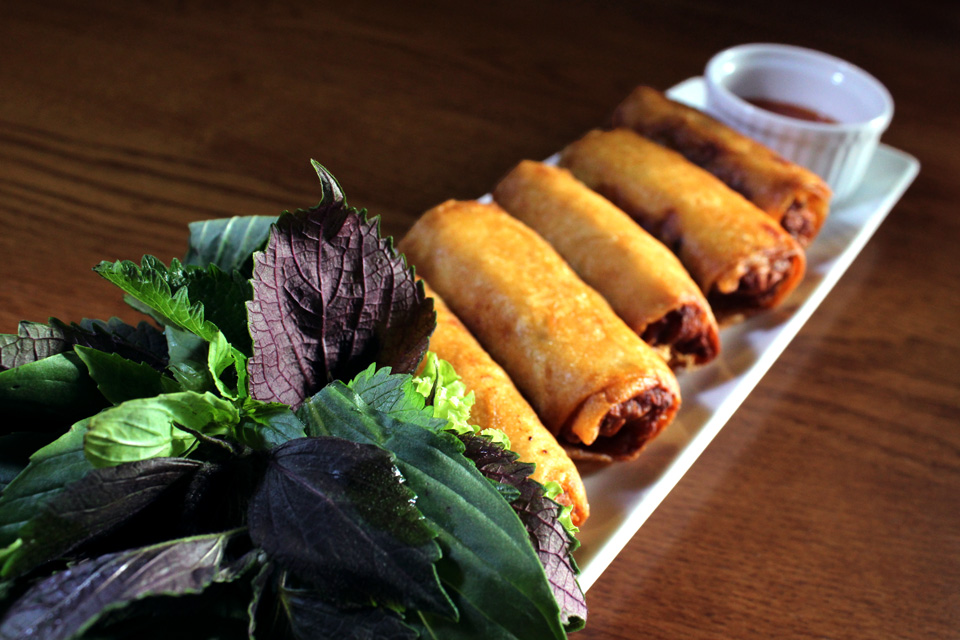 Some highlights from the menu include a banh mi (pictured above) with all the great usual ingredients (VND150,000), oven roasted honey pork ribs with sweet potato fries and honey mustard (VND320,000), Vietnamese pork and seafood spring rolls with herb salad and dipping sauce (VND220,000), and roasted Loose Rivet IPA soaked duck breast (pictured above) with purple rice, baby carrot, spinach and pomegranate sauce (VND350,000). The skin becomes textured with a caramelised fruity flavour thanks to the influence of the IPA.

The new menu is available at the Heart of Darkness taproom now. Soon there will be a selection of menu items and HoD’s craft beers available for delivery on Vietnammmm.com and at heartofdarknessbrewery.com/delivery so keep an eye out for that! 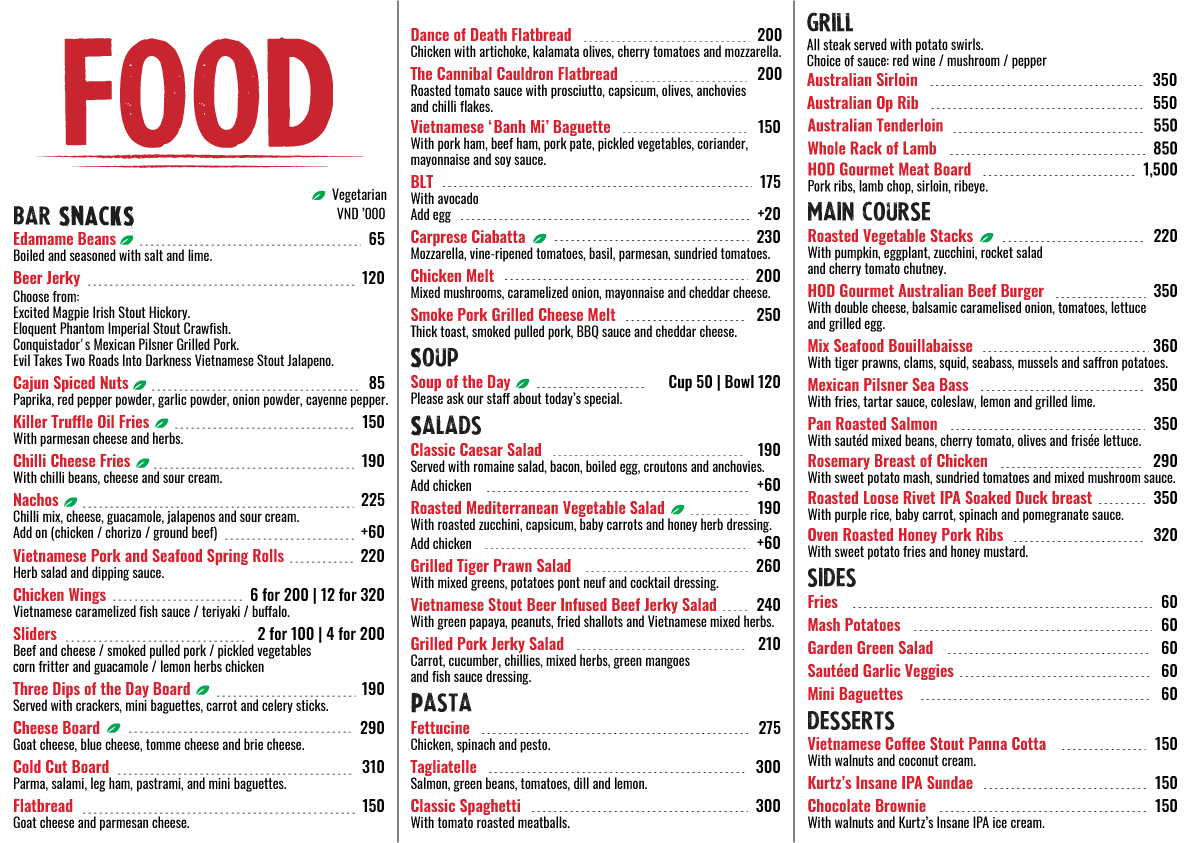 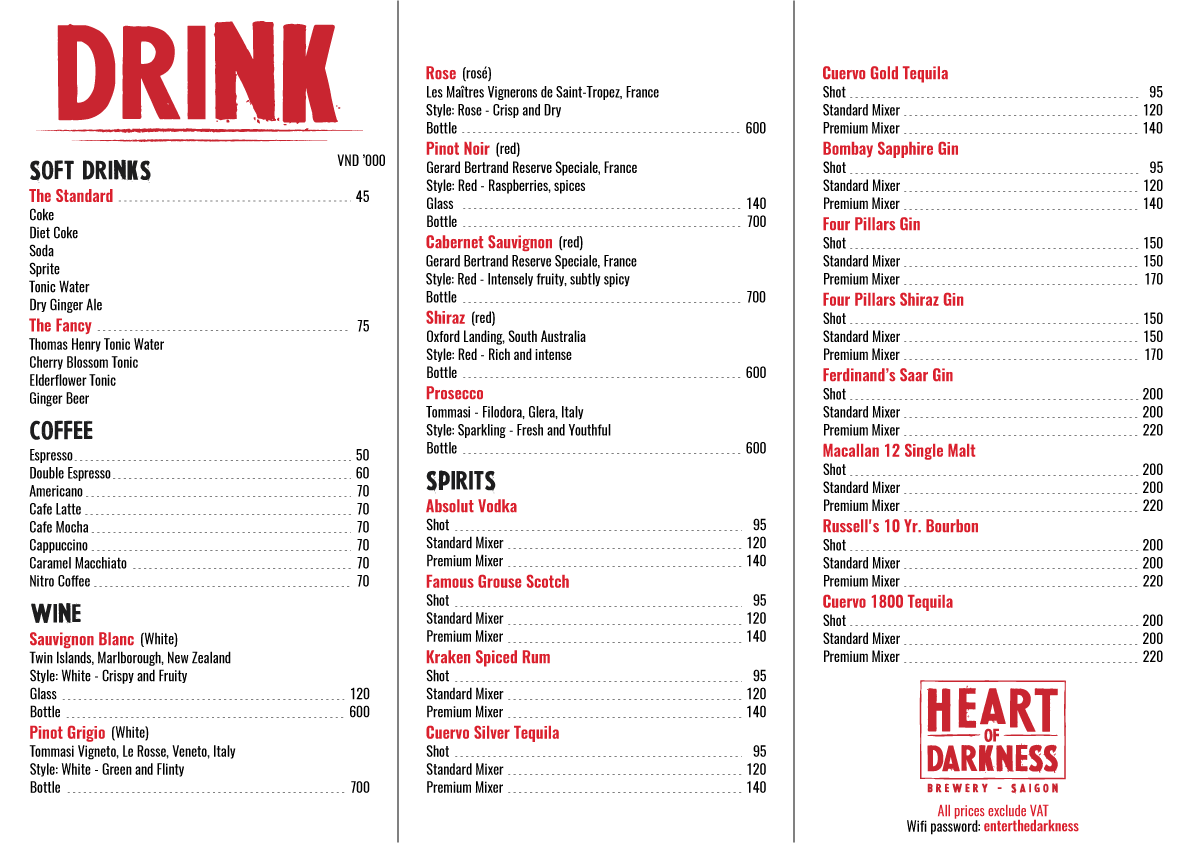