What started out with a small box of pomade has quickly turned into a gentlemen’s lifestyle company for two friends from Holland with a passion for men’s grooming.

Tom Goedhart and Guido de Leeuw had always liked the products their favourite barbershop Schorem in Rotterdam produced, so they approached the owners with a proposal to distribute their Reuzel pomade in Vietnam.

We’re trying to guide people towards the gentlemen lifestyle

“We knew we wanted to start some kind of business in Vietnam, but we didn’t know what,” says Tom. “The initial plan was to create dress shirts, but the step for us was too big, or at least the risks were too high. We also didn’t live in Vietnam, nor did we have any contacts here.” 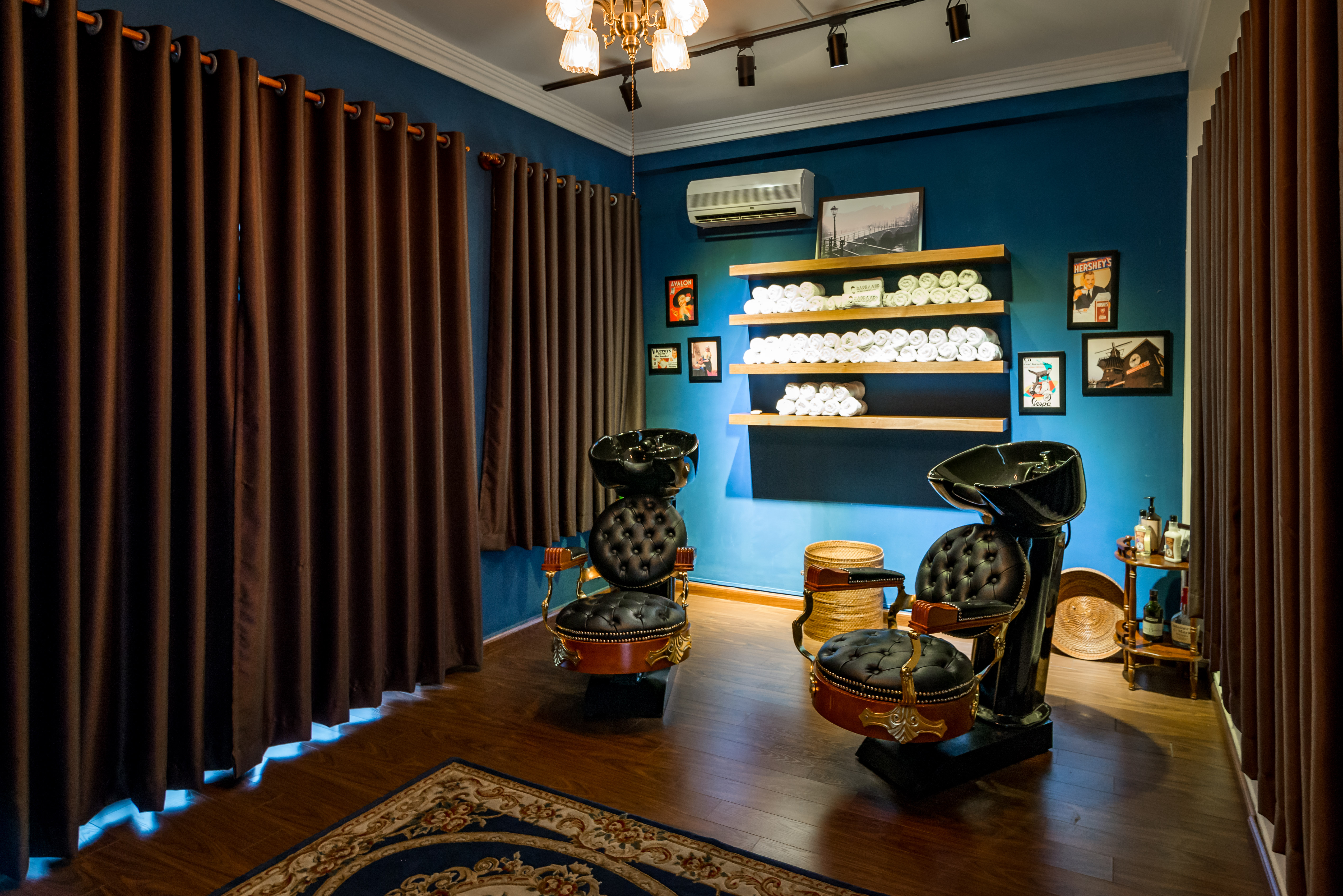 Fortunately for them, the guys at Schorem back in Holland agreed and three years later that small box of hair product has turned into a house — House of Barbaard — a multi-story men’s haven offering traditional barbershop services in Hanoi and Ho Chi Minh City.

“We’re trying to guide people towards the gentlemen’s lifestyle,” explains Tom, who with Guido saw a growing demand in Vietnam for places where men could enjoy a haircut and a hot towel shave over a whiskey — a kind of refuge for men from the pressures of modern life.

The first box of pomade wasn’t enough, so we had to bring in more to meet the demand

They also wanted to take advantage of the sudden popularity in Vietnam of men’s grooming products coming out of Holland, in particular those by Schorem.

“The first box of pomade wasn’t enough, so we had to bring in more to meet the demand,” says Tom. 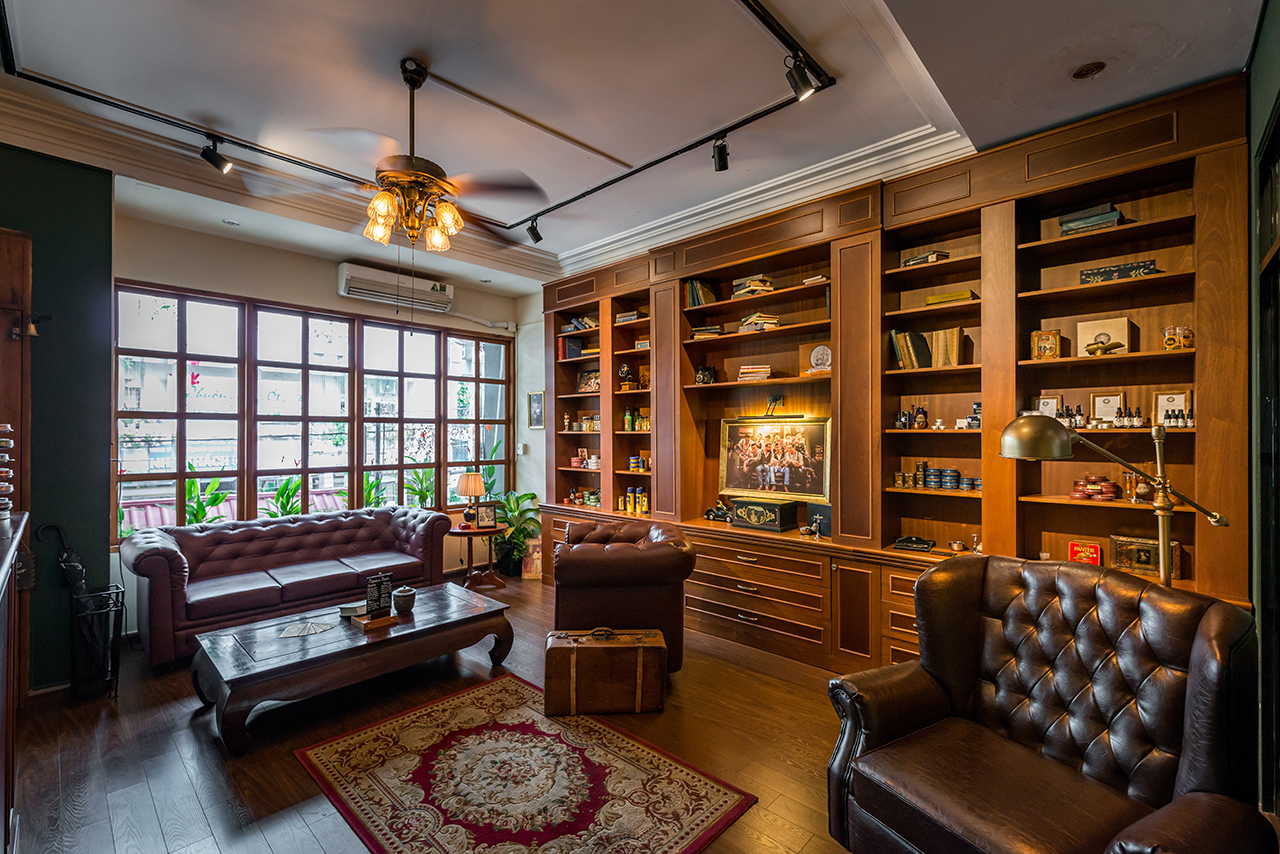 By then, people were urging them to bring a barbershop concept like the ones back in Europe to Vietnam, something Tom says was an idea they were already toying with, but with no plans to implement any time soon.

“We were planning on taking a year or two to figure out how we were going to launch it, then an article about Schorem on quite a big Vietnamese blog popped up on our feed, so we thought we had better hurry up.”

Four months later, Tom and Guido’s distribution operation in Vietnam was up and running, albeit while they were still living in Holland. As predicted, the Vietnamese were taken with the product, ultimately providing the guys with a springboard to kickstart what they now wanted to do, establish House of Barbaard. 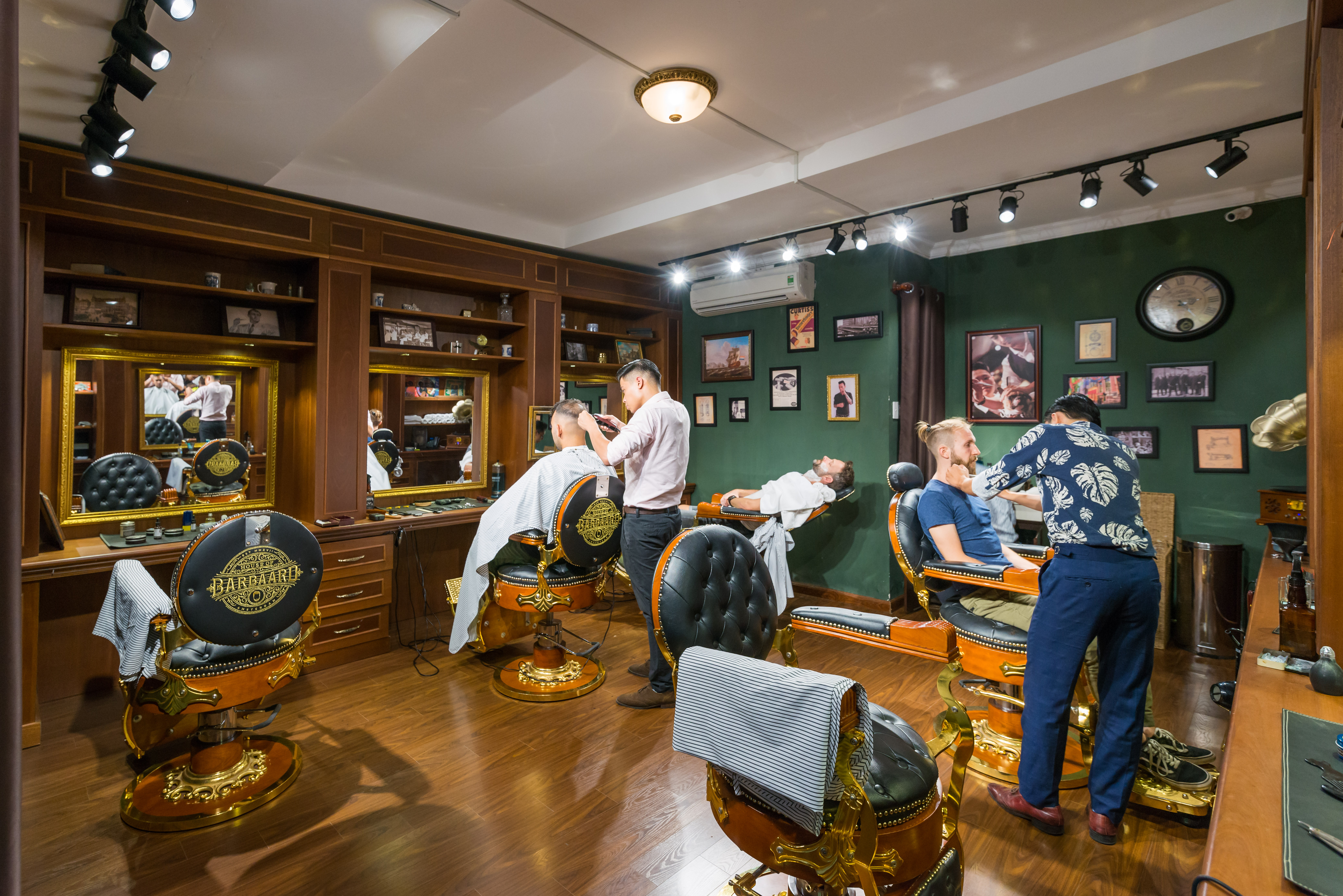 Their Ho Chi Minh City premises down a narrow alleyway off a main street in the city’s central Da Kao ward offers a welcome respite from the heat and periodic afternoon downpours during the monsoon. On the ground floor there is a spacious sitting room with a small but well-equipped bar at the back of the room to keep you occupied until it’s your turn for the barber’s chair.

Women are permitted on the first two floors of the Ho Chi Minh City premises, but beyond that, it is for men only, something that Tom says caused some minor backlash not long after opening. However, once the concept was explained, the people concerned understood the reasons behind it. 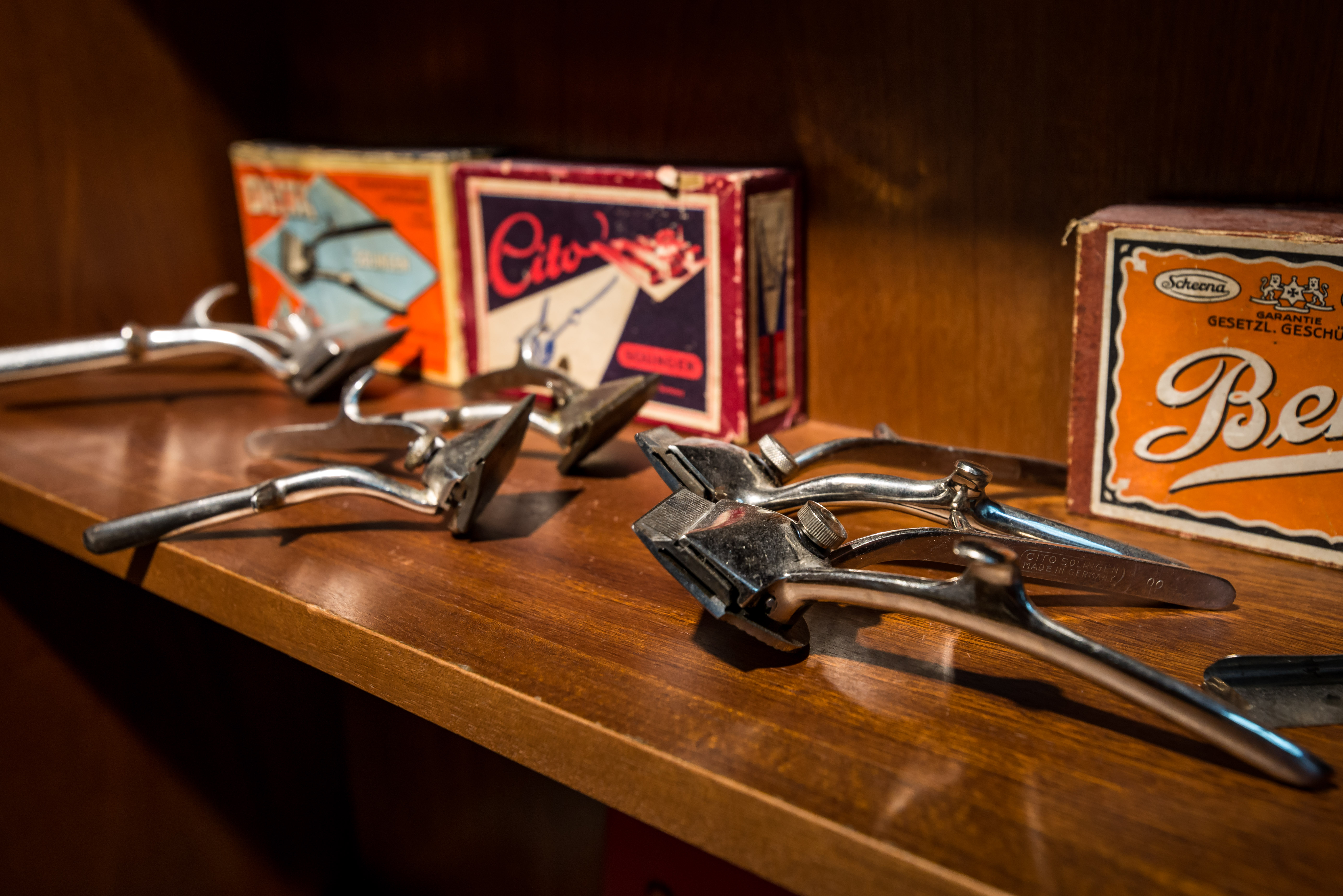 Indeed, what the two entrepreneurs have recreated are locations that hark back to the traditions of barbering before the profession’s gradual slip into obscurity at the hands of Gillette after the shaving behemoth introduced its first safety razors just over a century ago.

Other major global events also impacted on the popularity of barbers — The Great Depression, the two World Wars, and the hippie culture of the 1960s. Then it was the new wave of unisex hair salons of the 1980s and 1990s that all but sounded the death knell for the classic barbershop. Unisex salons introduced a one-stop shop where hairdressers were suddenly capable of churning out more haircuts in a day than perhaps a barber could in a week.

Yet, like many trends, they come full circle, and with the fairly recent hipster movement and return in popularity of tattoos has come the gradual return of traditional barbershops, places where men not only come for a cut and shave but also to catch up on current news and events (code for gossip) in classy, elegant surrounds that doff the hat to the golden era of barbering. In fact, House of Barbaard is the type of place you could drop into for a few drinks before a night out. 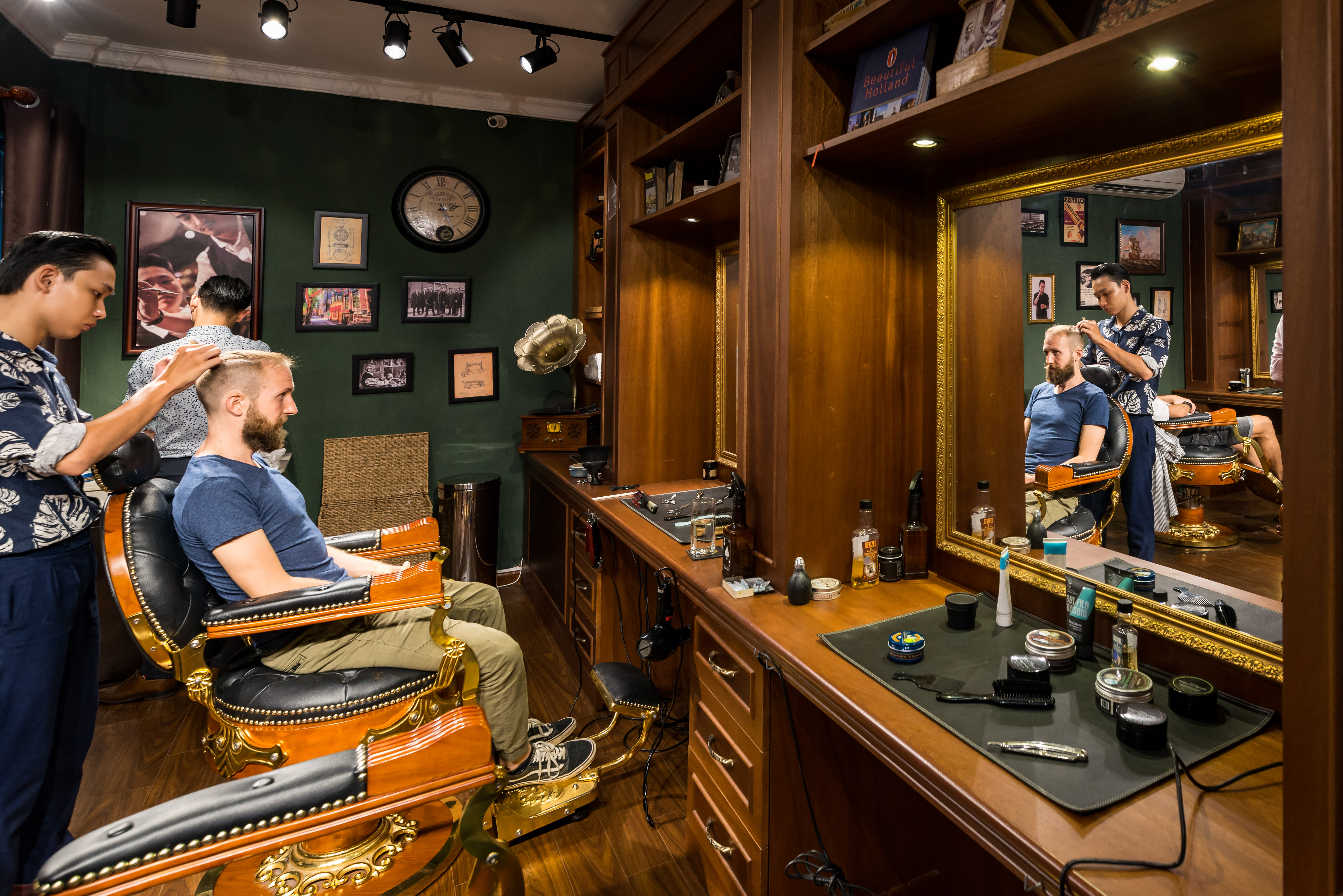 Sceptics might wonder what value they can get from an experience that can take two hours out of their day at a price that is many times more than most other places in the city. The Gentlemen’s Combo — a cut and shave (including a drink and snack) — will set you back VND600,000 (US$26), while a haircut only is VND400,000 (US$17.50). On the street? Next to nothing. There is also scope to spend much more than that on drinks, cigars, and men’s grooming products, potentially making your afternoon of bromance burn quite a substantial hole in your pocket.

But a trip to House of Barbaard is all about the experience. There is a definite sense of belonging here. Not only are the local barbers highly skilled at what they do (they are trained in-house), they place a strong emphasis on service quality. From the moment you are introduced, they make you feel at home, which is infinitely enhanced when they put a glass of single malt in one hand and an hors d’oeuvre in the other. 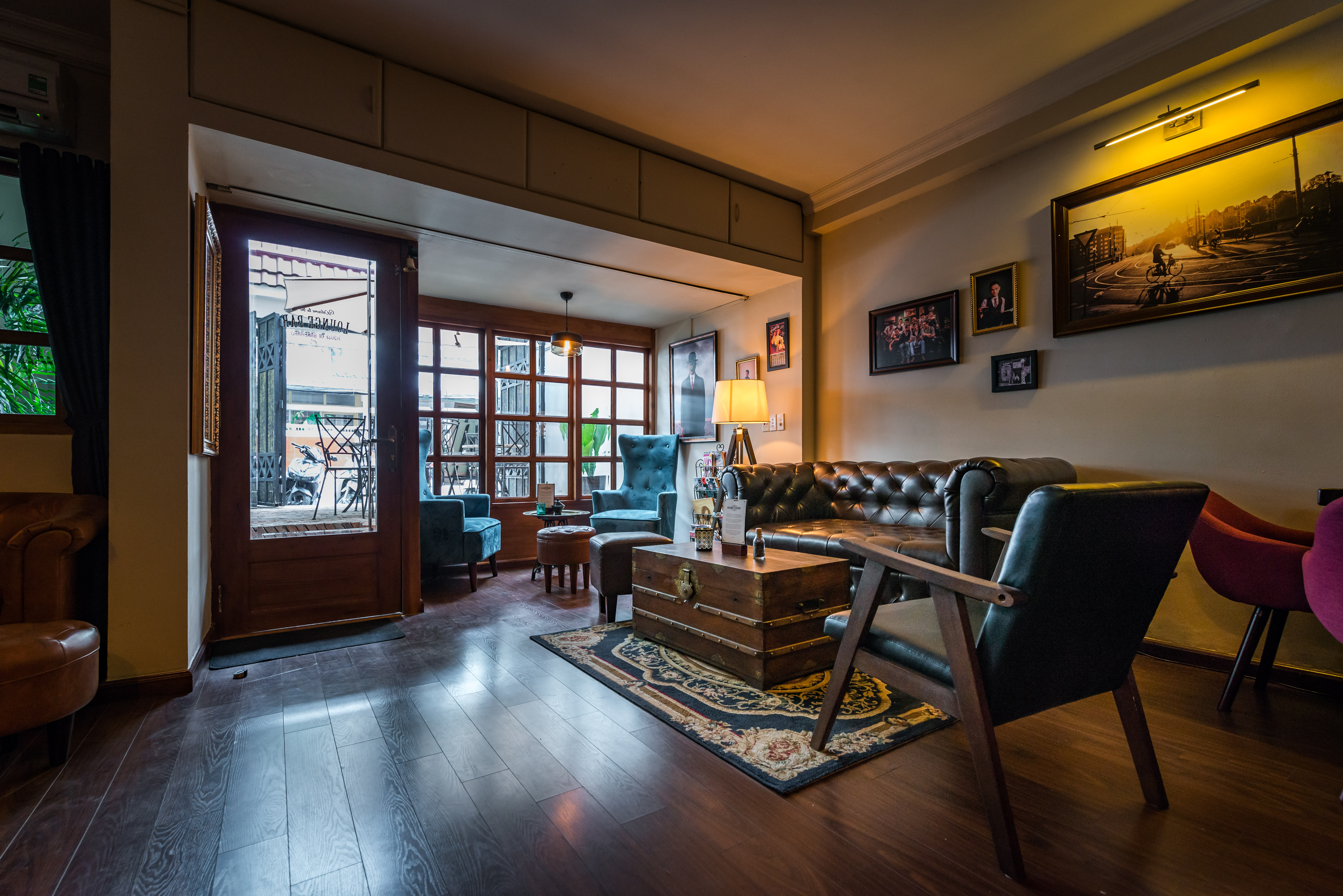 Mr Cong, my bespectacled barber whose maturity belies his 24 years-of-age and looking dapper in his tan leather shoes, blue slacks and floral button up shirt, asks me what style I am looking for today. I tell him I want to look like a gentlemen, better still, young again. He smiles and assures me he will “work on it”.

While Mr Cong goes about his craft, we chat about family, work, where to eat and the vagaries of Vietnam. Queen’s greatest hits have been playing over the speakers since I sat in the chair and he asks me if I like them. I say, “Queen, classic.” He says, “Ah, true.” For a moment I think Freddie Mercury has just screamed out, “You got blood on your face, a big disgrace…” before Mr Cong gains my attention again with another question and his straight razor at the ready. 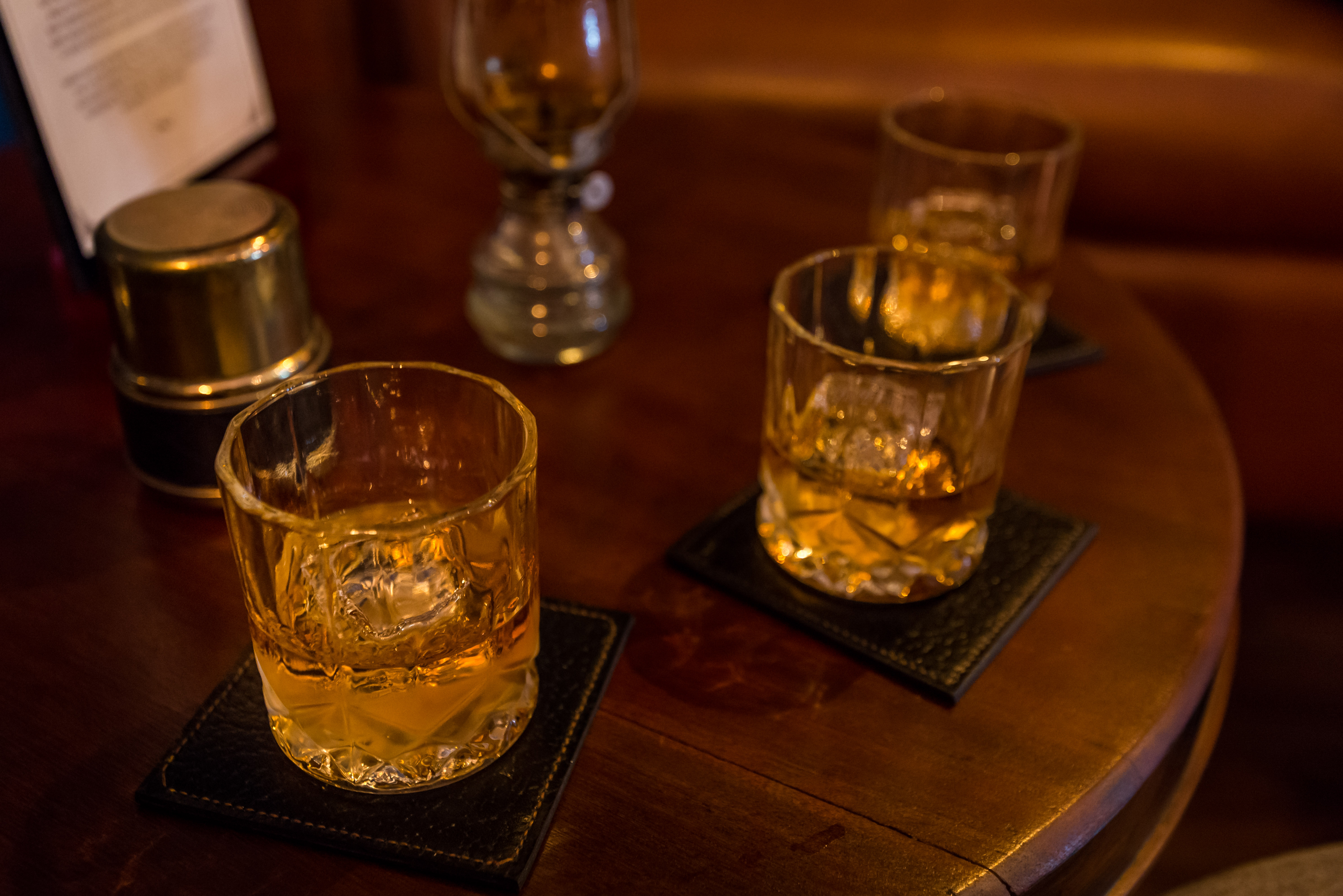 From behind me, my photographer Mike, who is also here for the experience, commends me on my new “pomp” which gets me wondering if I will be the only gent with a pompadour cruising round the city streets this afternoon. I am feeling pretty good about myself. Meanwhile, he tells his barber he didn’t know it was possible for his hair to look this good and that it will be a shame to put his motorcycle helmet back on when we leave.

Before long the shave is done, a medley of cold and hot towels, shaving creams and balms, not to mention great dexterity on behalf of Mr Cong, that leave my face feeling smoother and fresher than any Gillette Mach 3 could ever make it feel.

Without a doubt, the experience has been transformational. Two hours earlier I walked in a grubby, dishevelled looking journo struggling with the heat (and life), but walked out as cool as a cucumber, looking like a gentleman ready to take on the world.