Foul-mouthed British chef Gordon Ramsay once said something that stopped me mid-bite into my evening dinner. Contrary to what you might think, it wasn’t an expletive riddled assessment of a dish served up in an episode of Kitchen Nightmares.

No, this was something more profound. It hit a nerve because it was about a particular bugbear of my own. Eggs served up over-cooked. Or worse still, eggs served up with their yolks already broken.

The only person with the right to break the yolk of an egg is the person paying to eat it.

I’m with Ramsay. The only person with the right to break the yolk of an egg is the person paying to eat it. Eating should be more than merely filling a void at breakfast, lunch or dinner. It should be about the experience, too. To deny anyone — especially a paying customer — the joy of slicing into a perfectly poached egg and revealing its jammy inner goodness for the first time, is sacrilegious.

In somewhat of my own Ramsayan approach, I put the question to East West Brewing Co.’s executive chef, Matt Venzke, when I visited EWB recently to try their new Sunday brunch buffet offering:

Why do restaurants sometimes f*** up the eggs?

“I think the biggest secret to a poached egg, is that you’ve got to get the water boiling hot,” says the Californian about to celebrate his first year in Vietnam. “Add a little bit of salt, and then vinegar — there’s the secret, vinegar.” 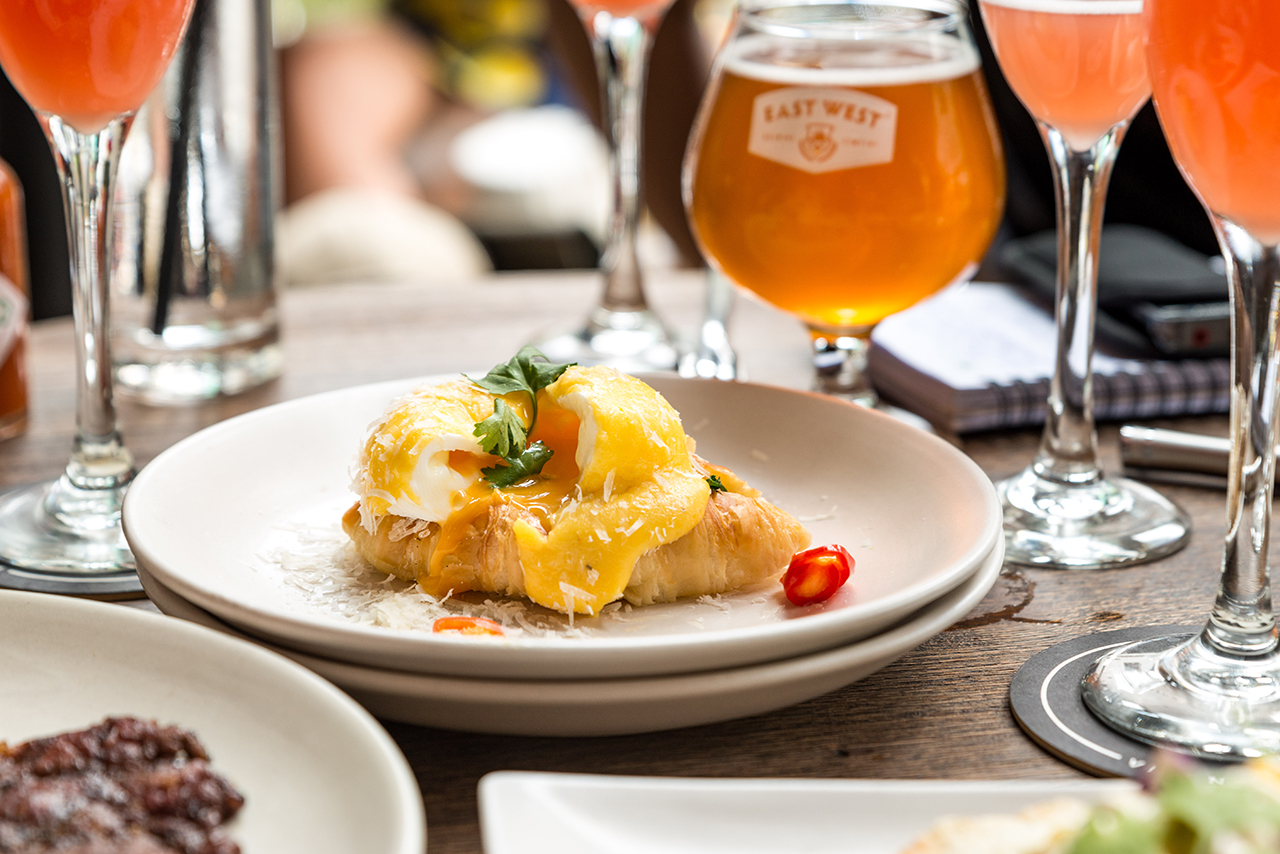 The jovial Venzke, whose resume includes the likes of Milwaukee’s Lakefront Brewery that has been brewing craft beer since 1987 and where Venzke helped open up their first kitchen program; and more recently, Industriel Urban Farm Cuisine in Los Angeles where he was head chef before taking on the top job at EWB, was more than happy to talk eggs between brunch orders during a busy Sunday morning service.

“Vinegar’s like an emulsifier that brings liquids together, it seals off the egg, then you have to stir like a mad man. You need to make a little wave pool,” adds Venzke, who says he was probably “thinking too Asian” when one of the first brunch items he concocted in his early days at EWB — a century egg with black rice, pork belly, kimchi and a hot sauce — didn’t sell too well: “It was a Mexican-Korean dish that was super funky,” he adds with a laugh. 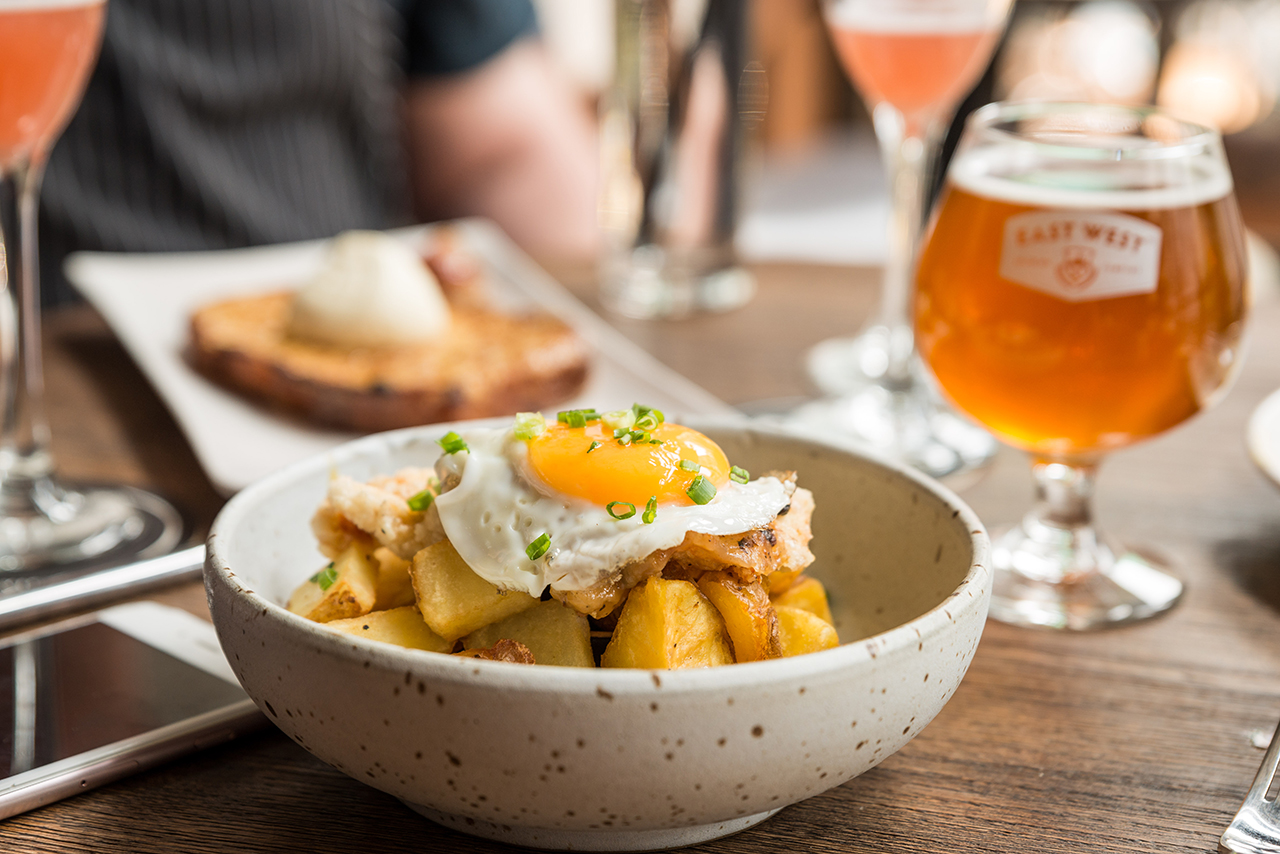 While these days Venzke might only poach somewhere in the order of 25 eggs during a meal service at EWB — “you’ve got to get right over the boiling water so you burn your fingers a little bit and drop it in” — it was at Industriel in LA before his move to Vietnam, where he once poached over 300 eggs for Mother’s Day, something he now looks back on with amusement: “At the time, I was definitely sick of it by the end. I was like, ‘This is enough!’ 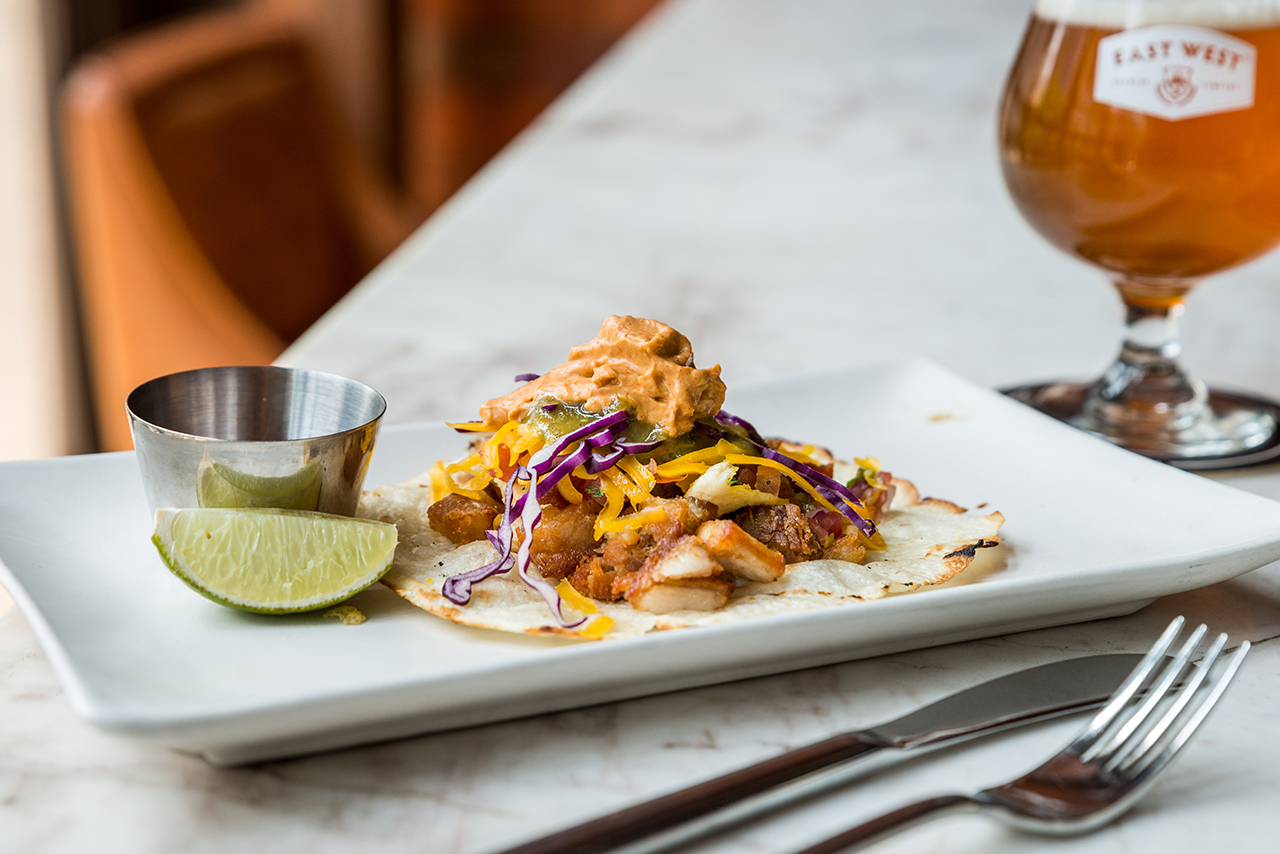 You can order eggs any way you like them, including how truckers back home take them — with steak. But it’s the other items on the menu that have chef Venzke’s imprint all over them. A native of Los Angeles, Venzke has been heavily influenced by Mexican cuisine, and so on the menu you can find zesty carnitas breakfast pork belly tacos. These babies prove that pork belly is good any time of the day and paired with a Bloody Mary or one of EWB’s flagship brews, the Far East IPA, these guys may have just earned the right to patent the cure for a hangover.

Another eggy creation of a Mexican persuasion is the chilaquiles, a tortilla with egg, house-made red salsa, cheese, pickled chilis, cilantro and a dollop of sour cream. From behind the camera, our photographer Mike (commenting between drools), said that they resemble the taste of authentic Mexican street food “but in a good way.” They are vegetarian, light but filling, which makes them one hell of a satisfying little treat. 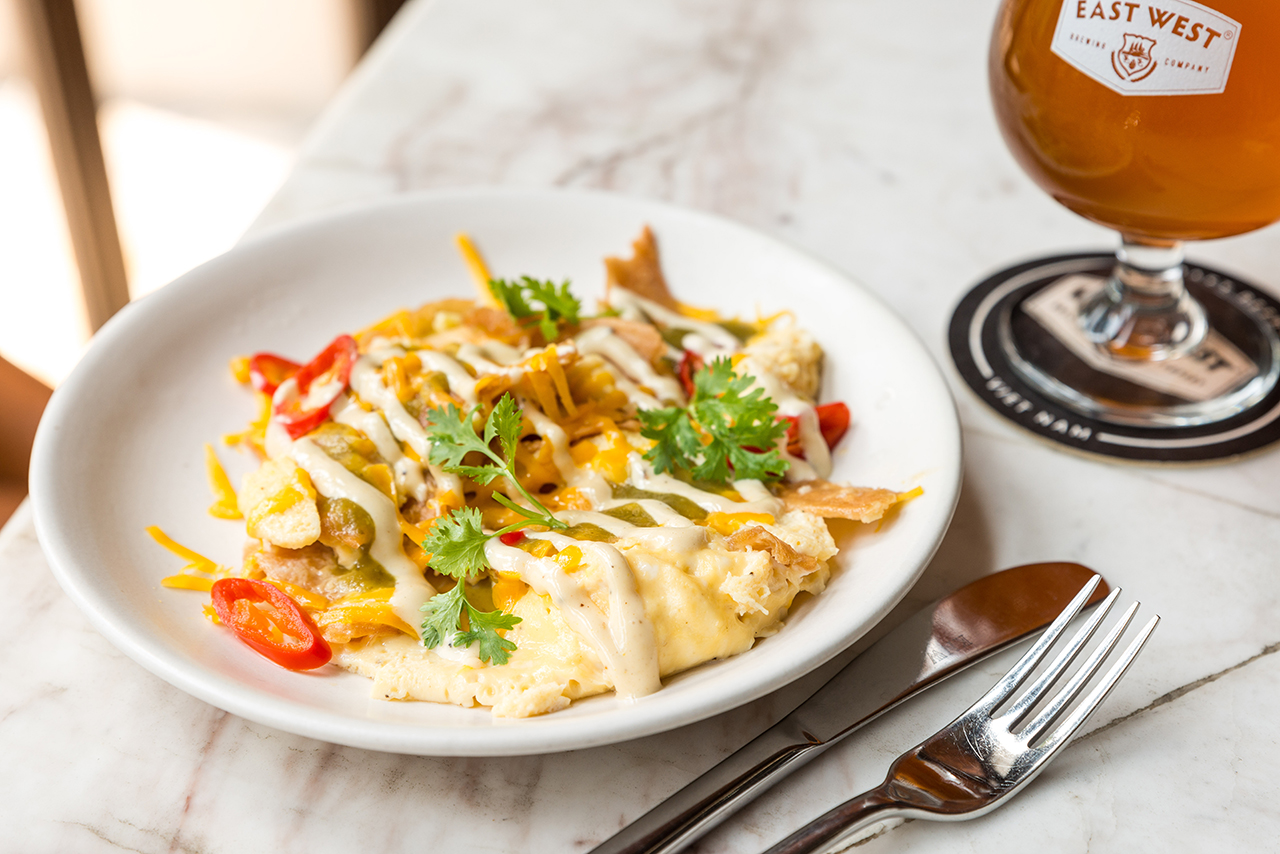 But you would be mistaken if you thought EWB’s new brunch buffet was all about chilis, tortilla and sour cream. Venzke and the team have come up with their own take on the breakfast classic, eggs Benedict. The French California Benny is a delightful little brunch number that gives you all the flavours that come with eating ‘eggs benny’ but without filling you up like the traditional one would.

Sometimes restaurants fall into the trap of offering too much, preventing the top dog — the actual egg — from shining through.

The EWB ‘benny’ typically comes as a mini-croissant with a poached egg delicately poised atop, with kale, grilled onions, mushrooms, parmesan, herbs and topped with a dollop of hollandaise. I ordered one without all the extras. Sometimes restaurants fall into the trap of offering too much, preventing the top dog — the actual egg — from shining through. EWB’s version is delicate, fresh and light with all the elements of the dish you would expect, except that this one is garnished with coconut flakes, a thoughtful touch given our tropical climate. 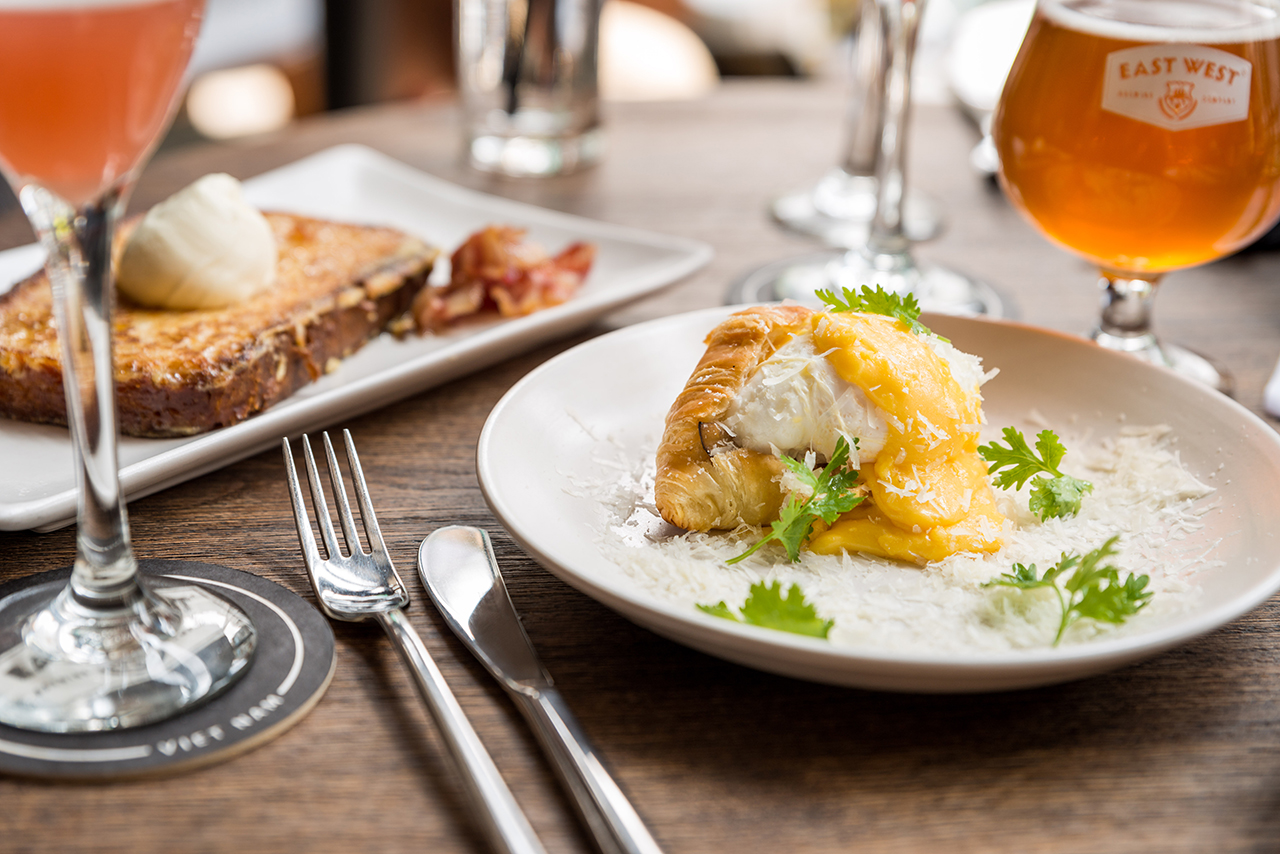 For people who prefer Vietnamese flavours for brunch, there’s a bo kho with tender chunks of slow-cooked beef adrift in a traditional-tasting stew with carrots and herbs topped beautifully with one of those poached eggs that Venke and his team do so well. A swift nick with the knife released the innards of a perfectly poached egg into the savoury stew beneath. Yeehaw! 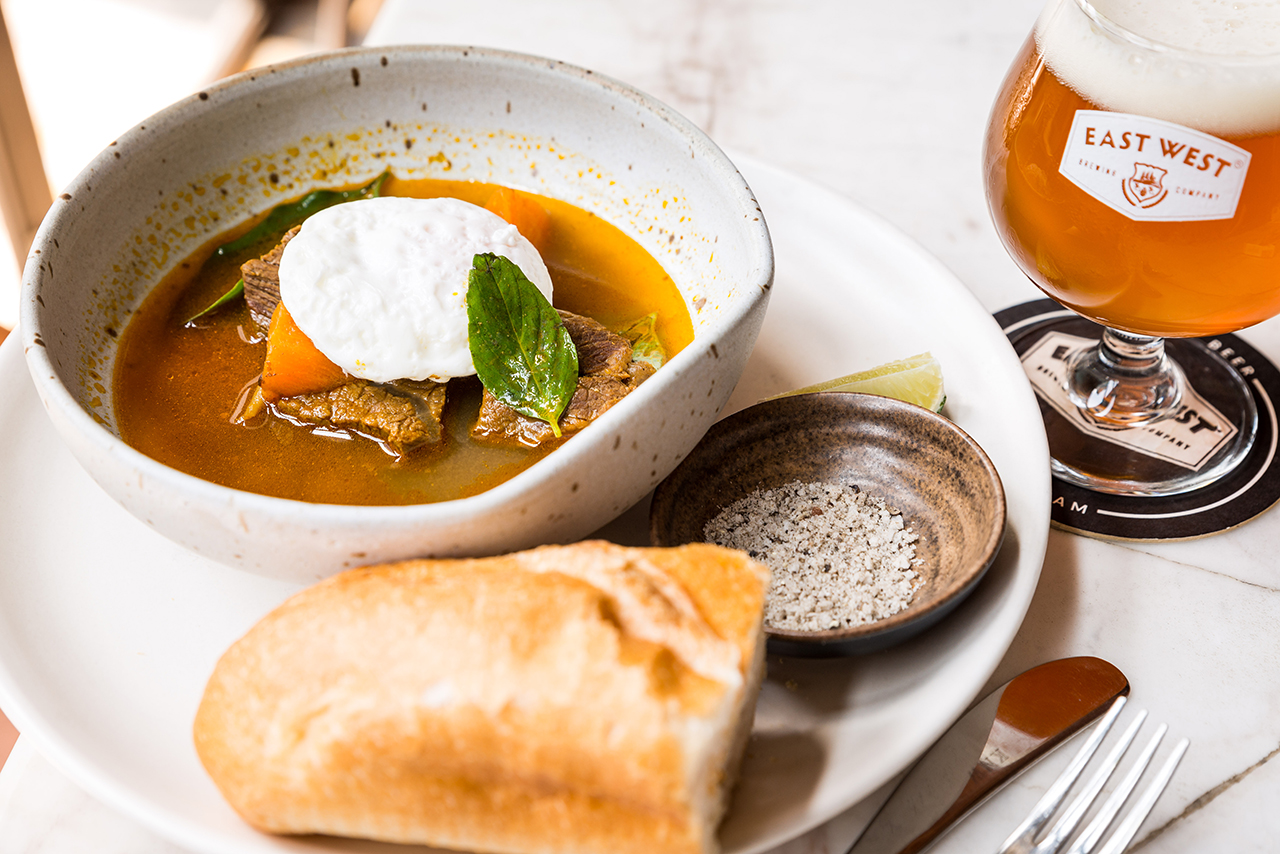 Visually, there is perhaps nothing on EWB’s Sunday brunch buffet menu quite as stunning as the baked stuffed burrata cheese avocados. Half an avocado in its skin with a lightly-grilled glob of burrata cheese, basil, cherry tomatoes with a drizzle of balsamic vinegar to top it off, this creation is the perfect gateway into a boozy brunch to kick-off Sunday or to awaken your tastebuds from the dead after a night of indulgence at one of the myriad bars in the neighbourhood. 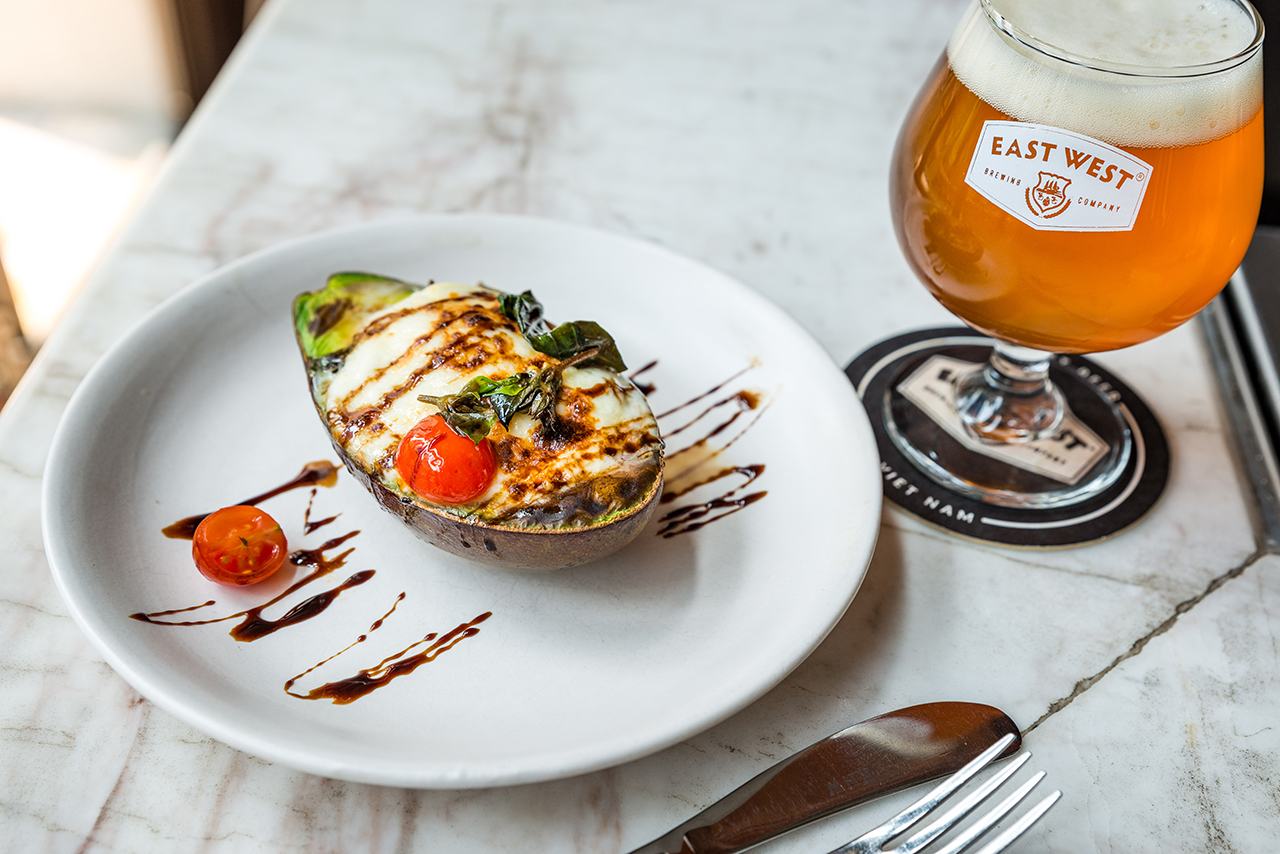 In all there are no less than 15 selections on EWB’s Sunday brunch buffet menu with a small selection of sides, including bacon, potatoes and buttery croissants. The fresh seafood bar offers oysters, mussels, clams and shrimp, which pair nicely with the cold bar buffet of salad, a charcuterie and cheese board, and fruit. 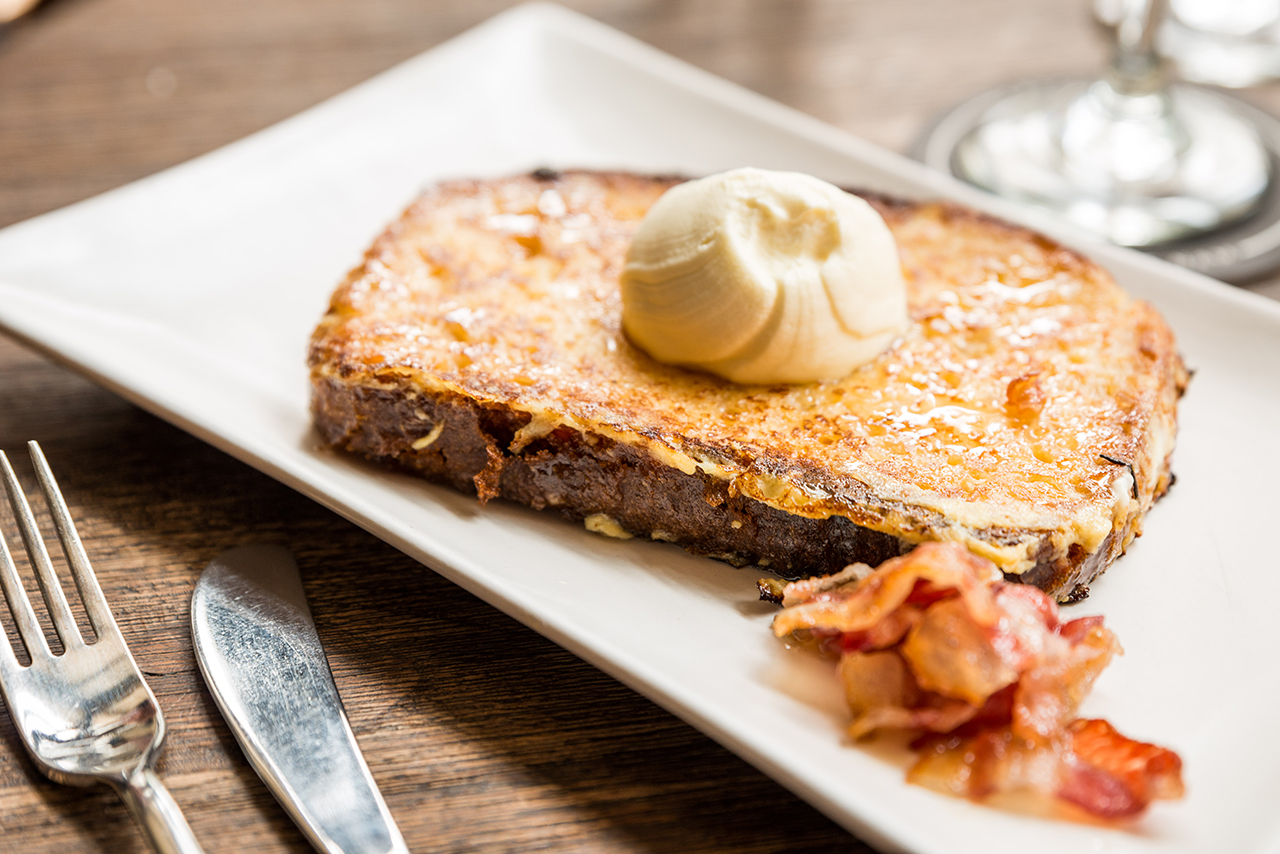 If you choose to go down the free-flow drinks path, this brunch is rare in Ho Chi Minh City. Other establishments around town offer brunch, but they are typically limited to free-flow prosecco and perhaps standard local beers at a higher price than this. Free-flow at EWB entitles you to four hours of world-class beers from a selection of eight of some of the best brews currently on offer anywhere.

Oh, and in case you were wondering, not one egg came out broken during my brunch. F***ing lucky.

East West Brewing Co.’s weekend brunch is available every Sunday from 11am to 3pm.

The brunch packages available from June are: