Nestled in central Vietnam and next to the border with Laos, Phong Nha – Ke Bang National Park is a caver’s heaven. But it has so much more than subterranean wonders. It could just as easily be known for its magical roads, pristine jungle, and rock-climbing formations.

To get to Phong Nha town — home base of the national park — it depends on the purpose of your visit. If you are like us and visiting from Ho Chi Minh City for a long weekend, you land at Dong Hoi airport, around an hour’s drive away.

From there, you can arrange to hire a motorbike and take the main road to town, or take a taxi which will set you back around US$15 to US$20 (VND345,000 to VND450,000). We chose to hire a motorbike, and despite the rain storm along the way, it was worth it.

For backpackers, it’s now increasingly becoming a must visit location on the trail and buses stop at Phong Nha town several times a day. 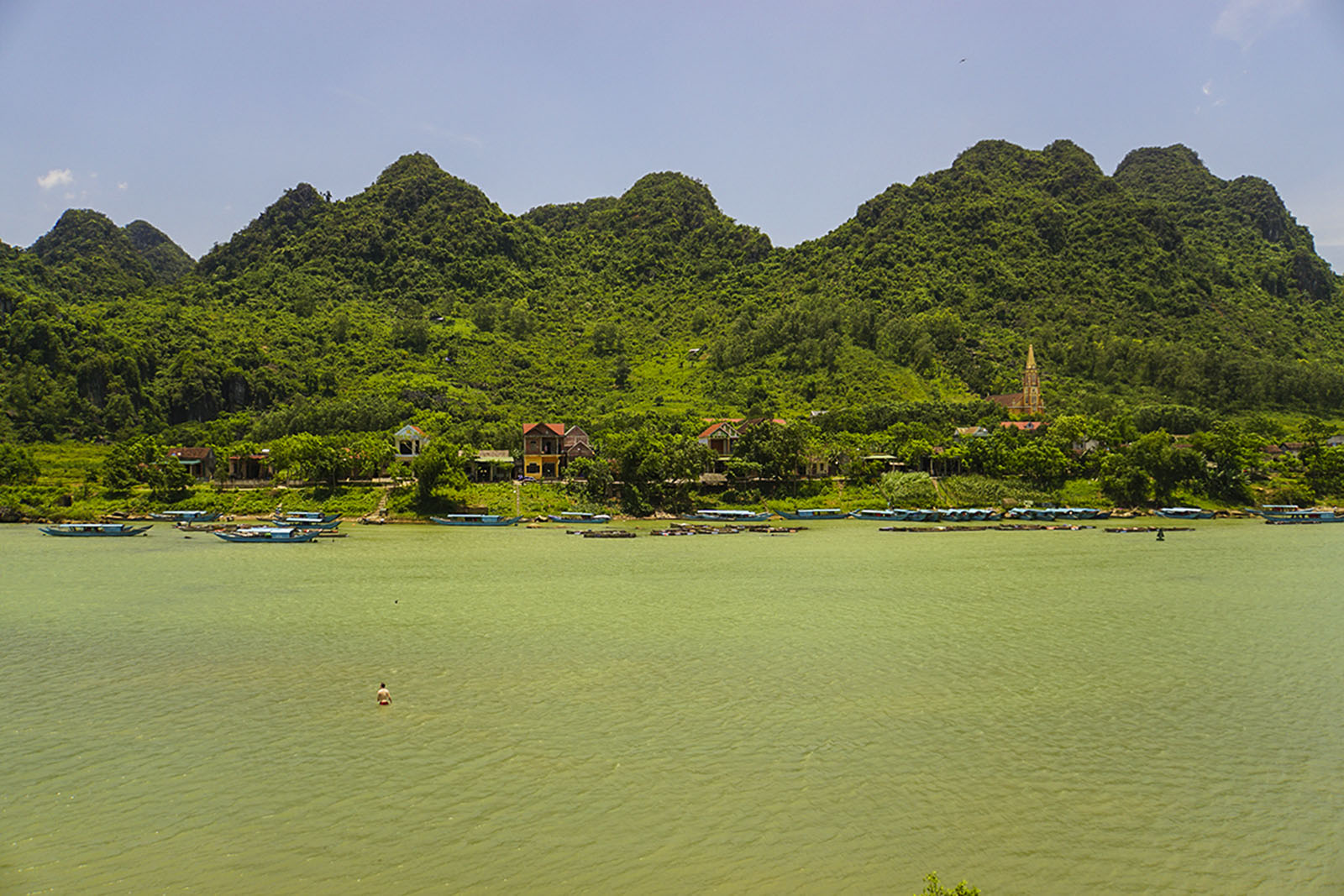 Our VietJet flight from Ho Chi Minh City to Dong Hoi landed at lunchtime. After picking up our pre-arranged motorbike at the airport, we grabbed some supplies and made our way to Phong Nha.

The 40km road was only built eight years ago, but has cut the journey time from three hours to a mere 50 minutes. Along the way, you are greeted by typical Vietnamese countryside, with the occasional cow grazing the verges.

During an enforced rain break, we stopped at a family-run roadside cafe. Essentially, it’s the front yard of the family’s home, with a few plastic chairs and tables. Here, they serve only local delicacies, like chicken liver. Though much of it is delicious, it is certainly an acquired taste. Washed down with refreshing sugar-cane juice, the bill came to a mere US$3 for two people.

After a quick game of football with the local kids, we hit the road again until we reached Phong Nha town. 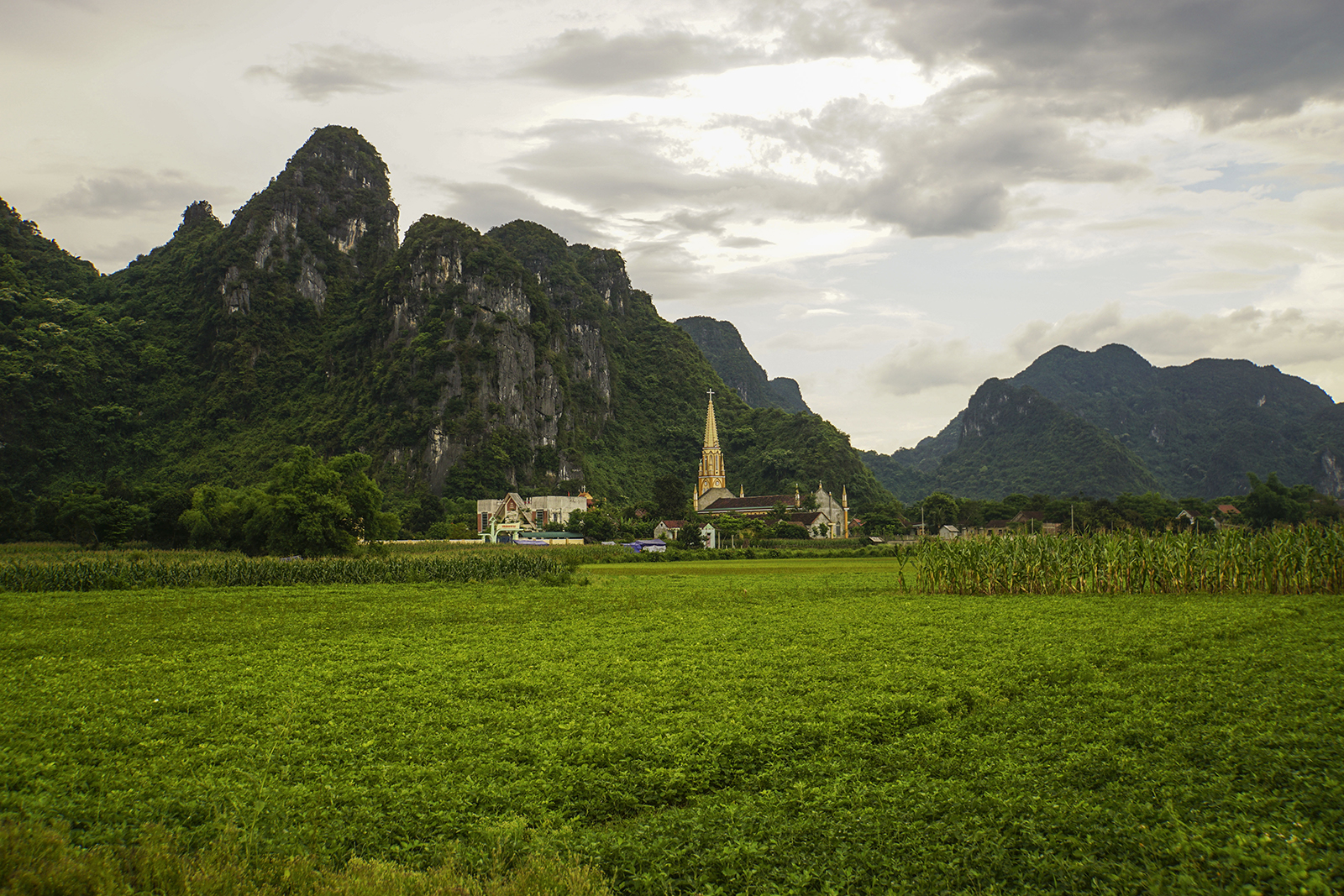 The town itself is just off the main road. The huge mounds of rock at the entry point offer a tantalising glimpse of the neighbouring national park. Situated on a long stretch of road, the town has a “touristy” feel. In the central part of town, it seems every other building is a hostel or a western-friendly restaurant.

We spent the first two nights at Nguyen Shack, where private rooms with shared bathrooms cost around US$9 a night. It isn’t luxurious by any stretch of the imagination, but it is comfortable.

By the time we got settled, it was already time for dinner so we headed to Omar’s Indian Restaurant. The set-menu includes two courses, a drink, and naan bread for around US$6. It is well worth it, even the grumpy waiter added entertainment value. 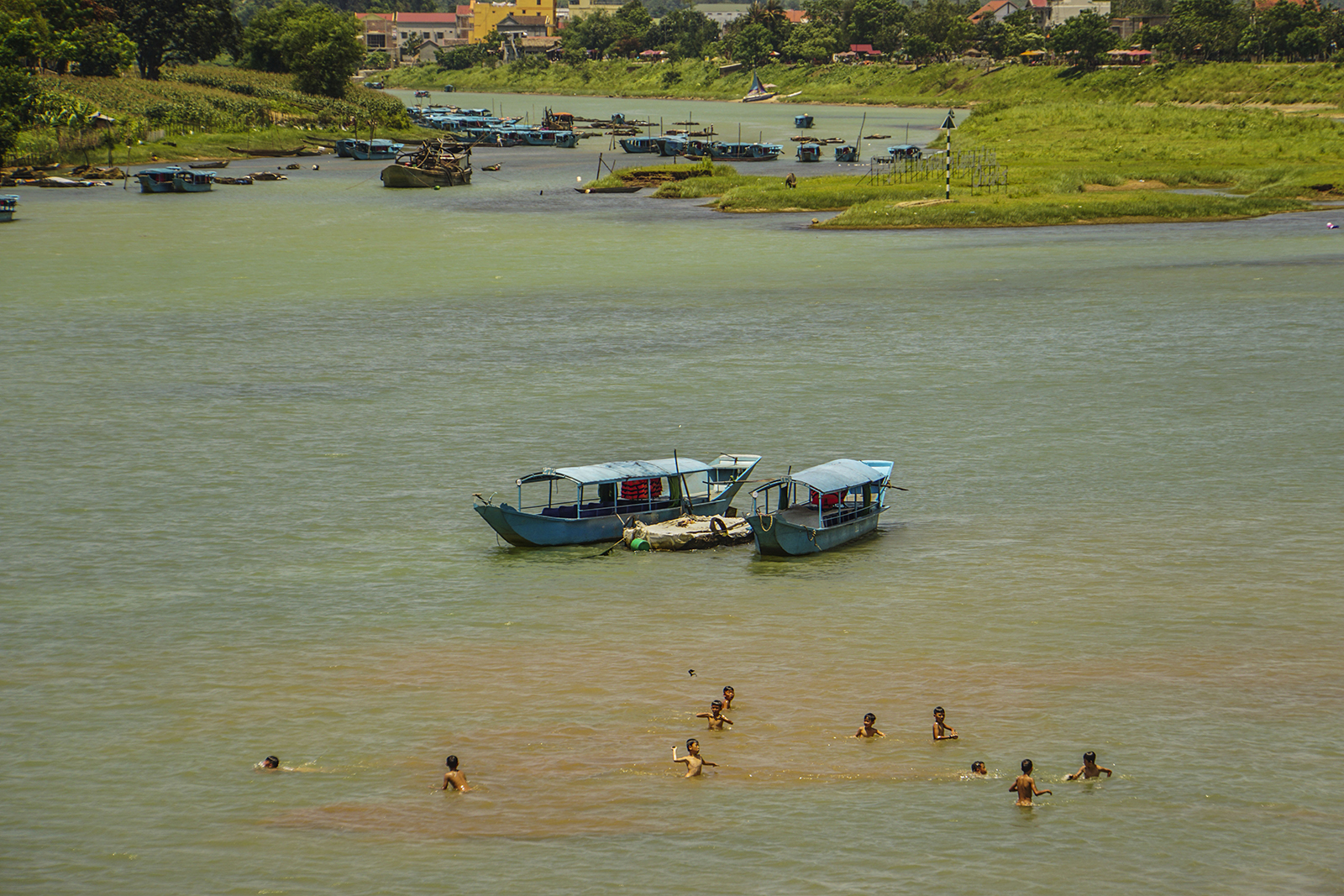 We hopped on our motorbike and headed to the Dark Cave (Hang Toi). The drive offered our first glimpse of the national park itself, which is essentially picture postcard Vietnam. The fields with cattle set against the dramatic backdrop of the huge limestone cliffs are what make the park such a draw.

We took our time on the road, taking an hour and a half to do a 45-minute journey, stopping to take snaps along the way. 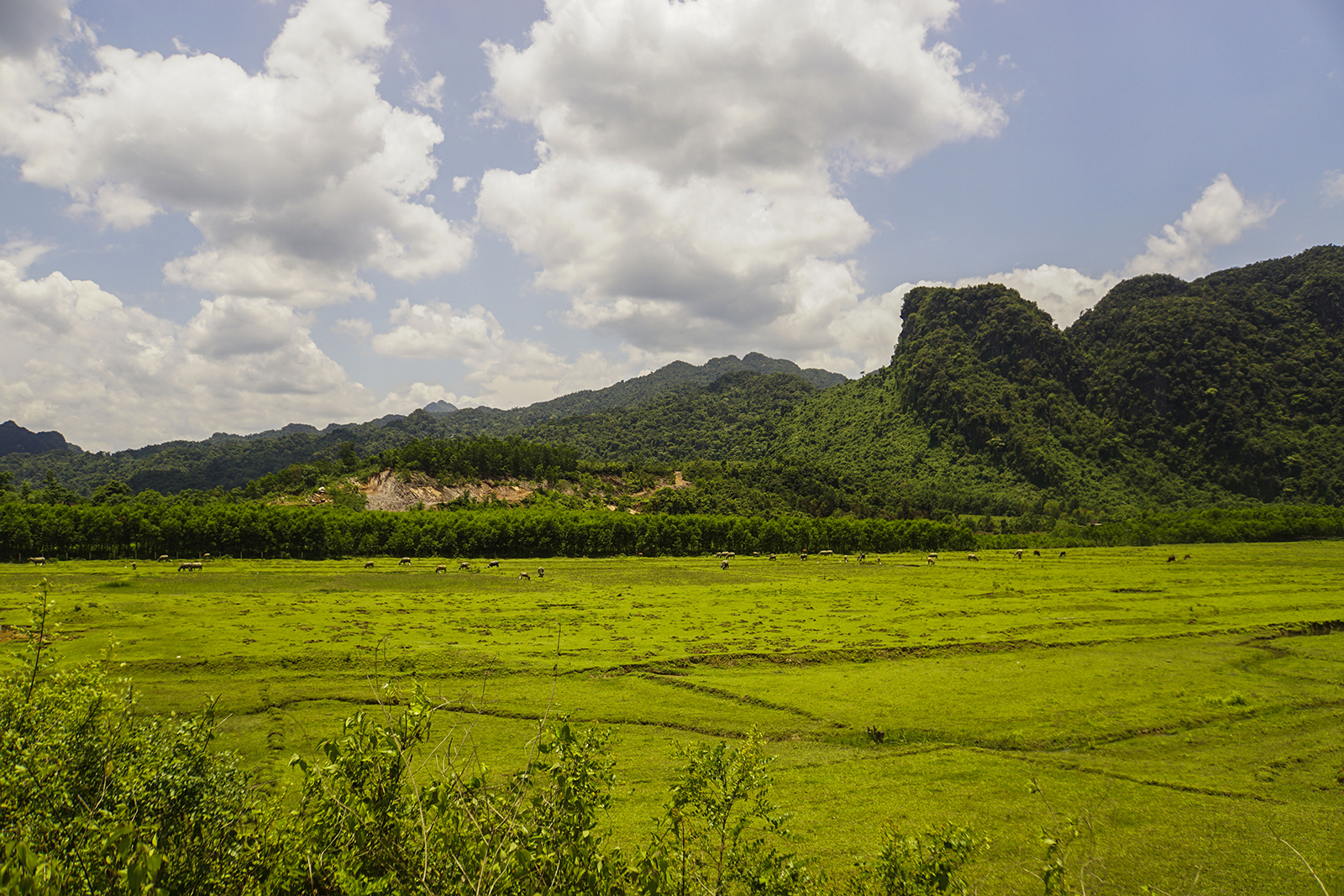 The Dark Cave is part natural wonder, part adventure playground. After paying an US$18 entry fee, we changed into our swimsuits and got kitted out with a harness and life jacket. We were then shepherded towards a tower, from there revealing a 70m zip line running towards the cave itself.

Despite my partner’s reassurances that it wasn’t that fast, it was quick for me! But perfectly safe.

After a short swim from the landing spot, you enter the cave itself. A guide leads the way for around 10 minutes to the main attraction, a subterranean mud bath. While the healthy properties of mud and clay for your skin is well-known, the fact you can get such goodness in a cave, is perhaps less so. 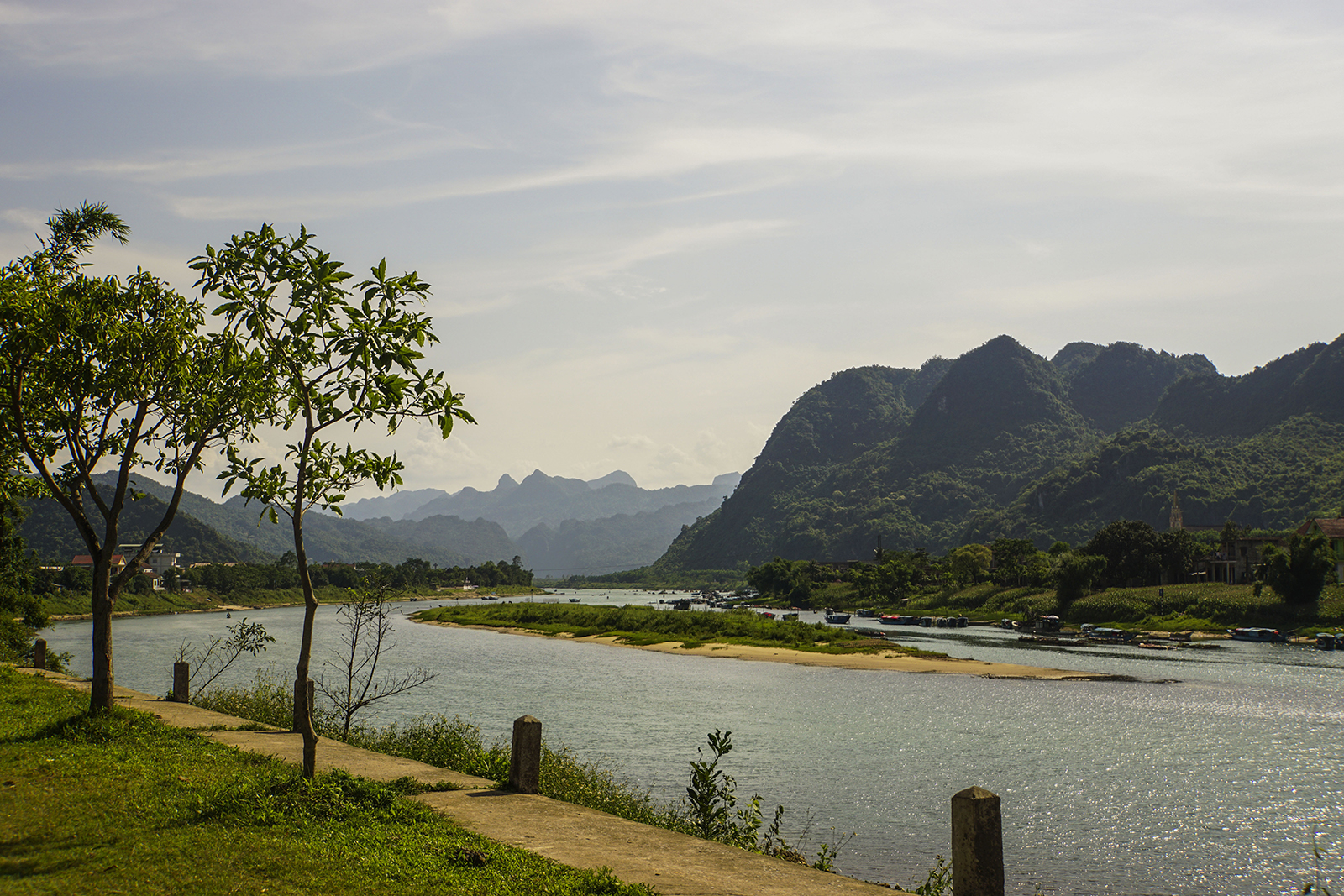 After 10 minutes, the guide leads the group out. However, if you wish to stay a little longer, take advantage of the darkness and stay behind. You can always leave with the next group, or the one after that if you so desire.

Once you are back out of the cave, you can kayak back to the main entrance area, where the more adventurous can do more activities.

On the way back to the hotel, we decided to take a detour off the main road to Phong Nha town. It proved to be an inspired decision.

We were greeted by stunning vistas of the national park and witnessed a wedding photo shoot on an old, rusty bridge.

Just before sundown, we stopped by one of the roadside food stalls on a football pitch at the entrance to town. We ordered a mini-banquet of delicious Vietnamese food, including fresh spring rolls and noodles. The spring rolls were so tasty, I ended up eating them all, something my partner wasn’t overly happy about.

The total bill including drinks for two people? US$5. 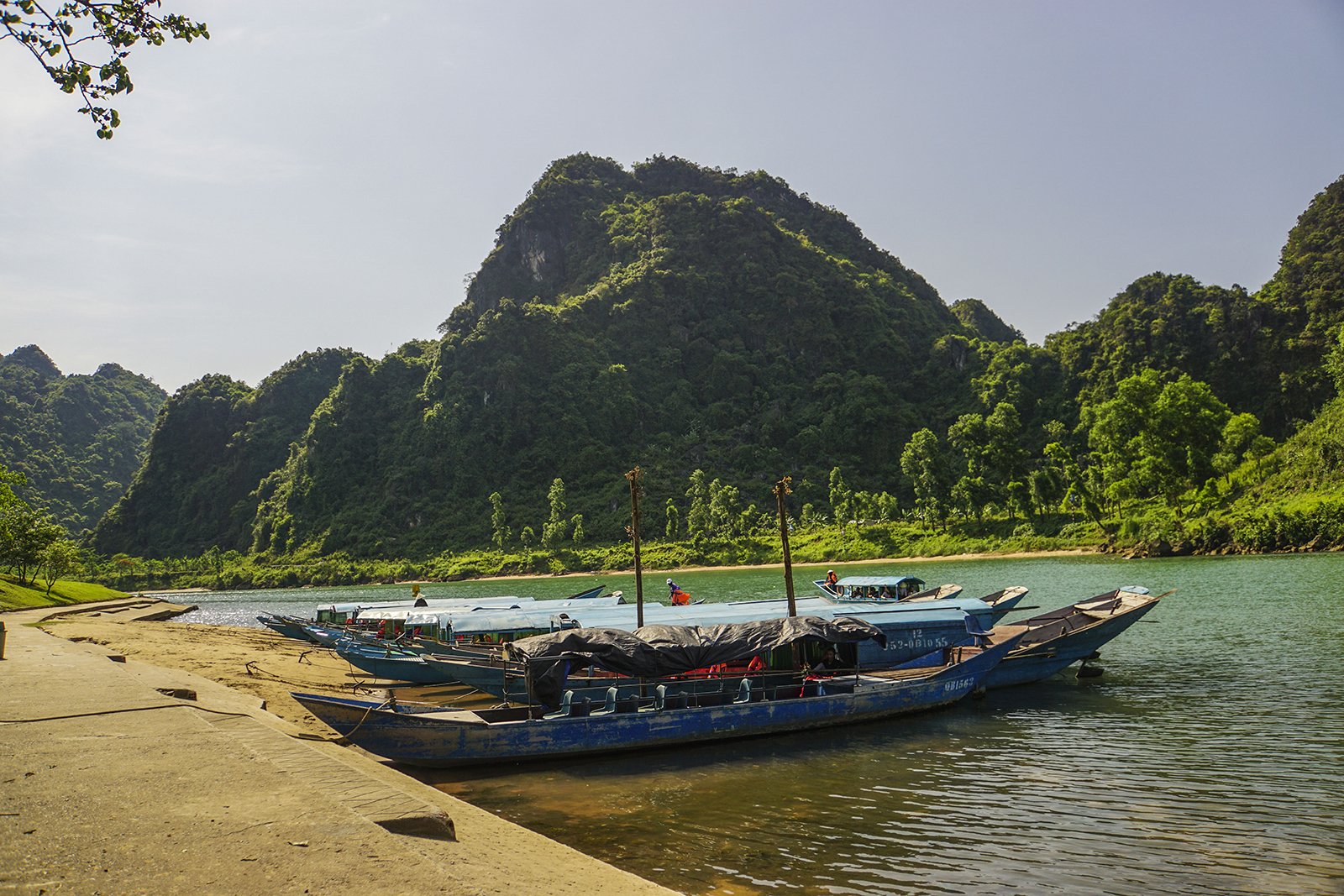 This was probably the best day of our trip.

First of all, we checked into a new hotel, the Carambola Bungalows. At just US$25 a night, including breakfast, this charming place is situated right on the riverfront. The slightly out-of-town location gives it a calm ambiance, with simple but well-sized and very comfortable accommodation. There is even a small beach where you can swim in the relatively clean waters of the Chay River, one of two rivers that run through and shape the park.

From there, we hit the road again towards Paradise Cave. There are two routes from Phong Nha — one is via the main road, which the tour buses take via the Dark Cave. The other is via the Botanical Gardens.

We chose the latter. 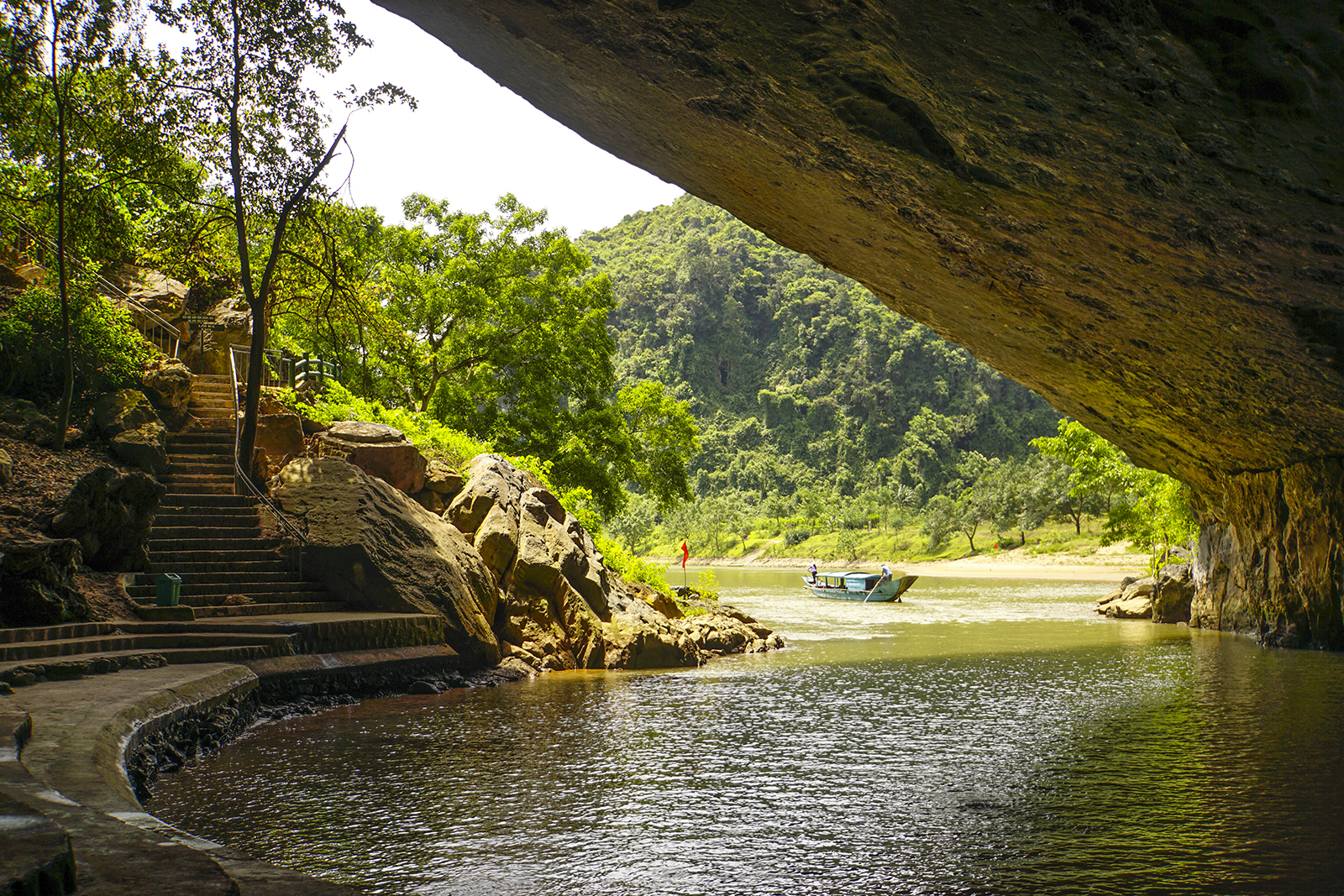 The route, which incorporates a tiny section of the famous Ho Chi Minh Trail, is one of the most spectacular drives you will ever likely go on. Each bend reveals another breathtaking view. The roads take you high up into the Ke Bang jungle and through pockets of microclimates that provide an escape from the searing heat.

After 45 minutes of stunning scenery, we arrived at Paradise Cave. It was a Monday, which meant that we had escaped the crowds. The entry fee is around US$10.

It takes a good half hour trek from the car park to the mouth of the cave itself, which is misleadingly small. After a few steps down, the vast cavern reveals itself. The scale is extraordinary, and the path winds down the 40-metre drop to the floor. 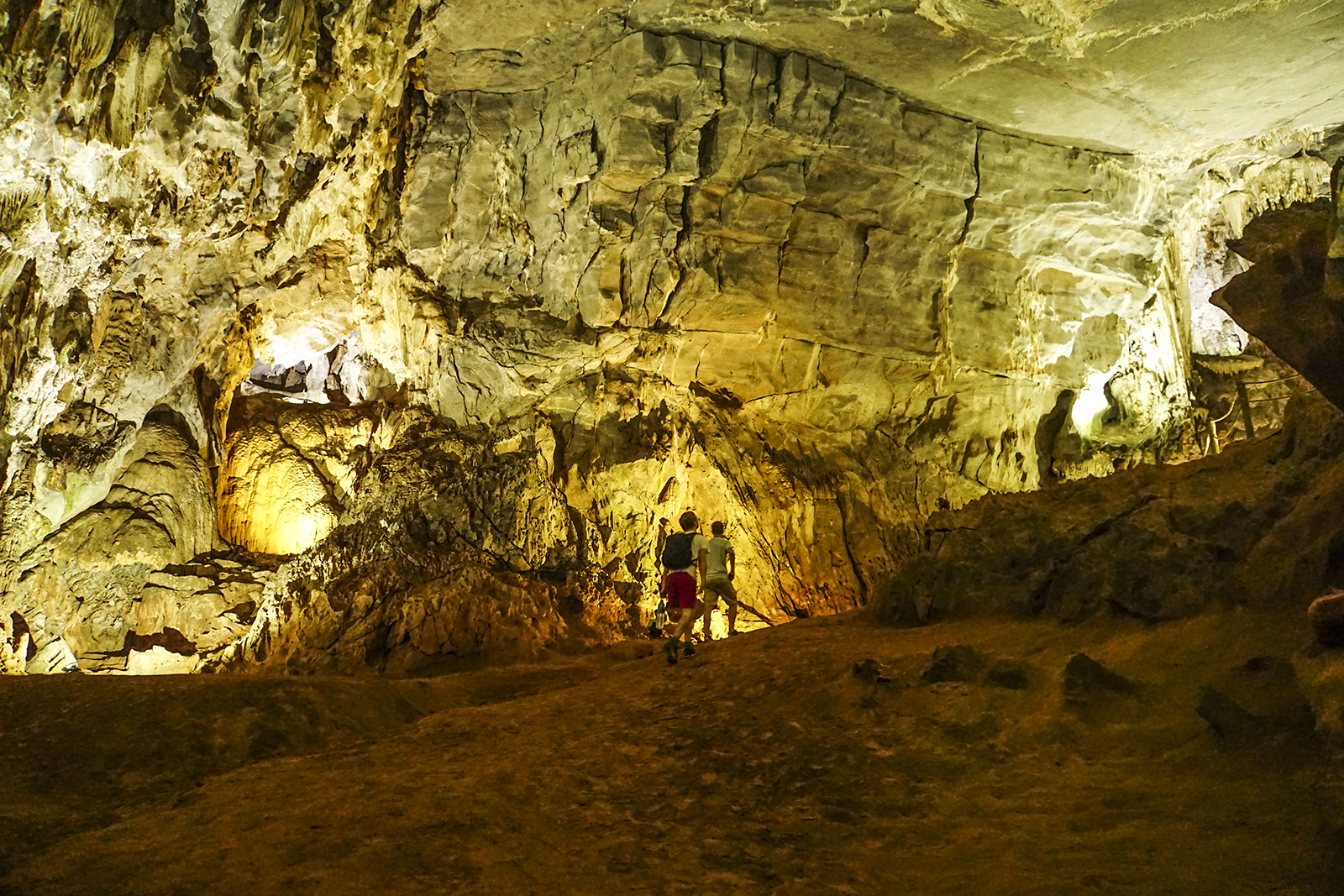 The formations and stalagmites, together with the lighting, resemble a fantasy land. There are inviting looking terraces of pools and dramatic photographic opportunities. For another US$100 or so, you can go beyond the paths and head seven kilometres deep into the cave, crossing a subterranean river along the way to an opening where a picnic will be served.

For our last night in Phong Nha, we enjoyed bun cha with fried spring rolls and sausage at D-Arts Zone. It isn’t going to win awards for speedy service or great food, but nonetheless, it is a pleasant place to spend an evening for US$8. 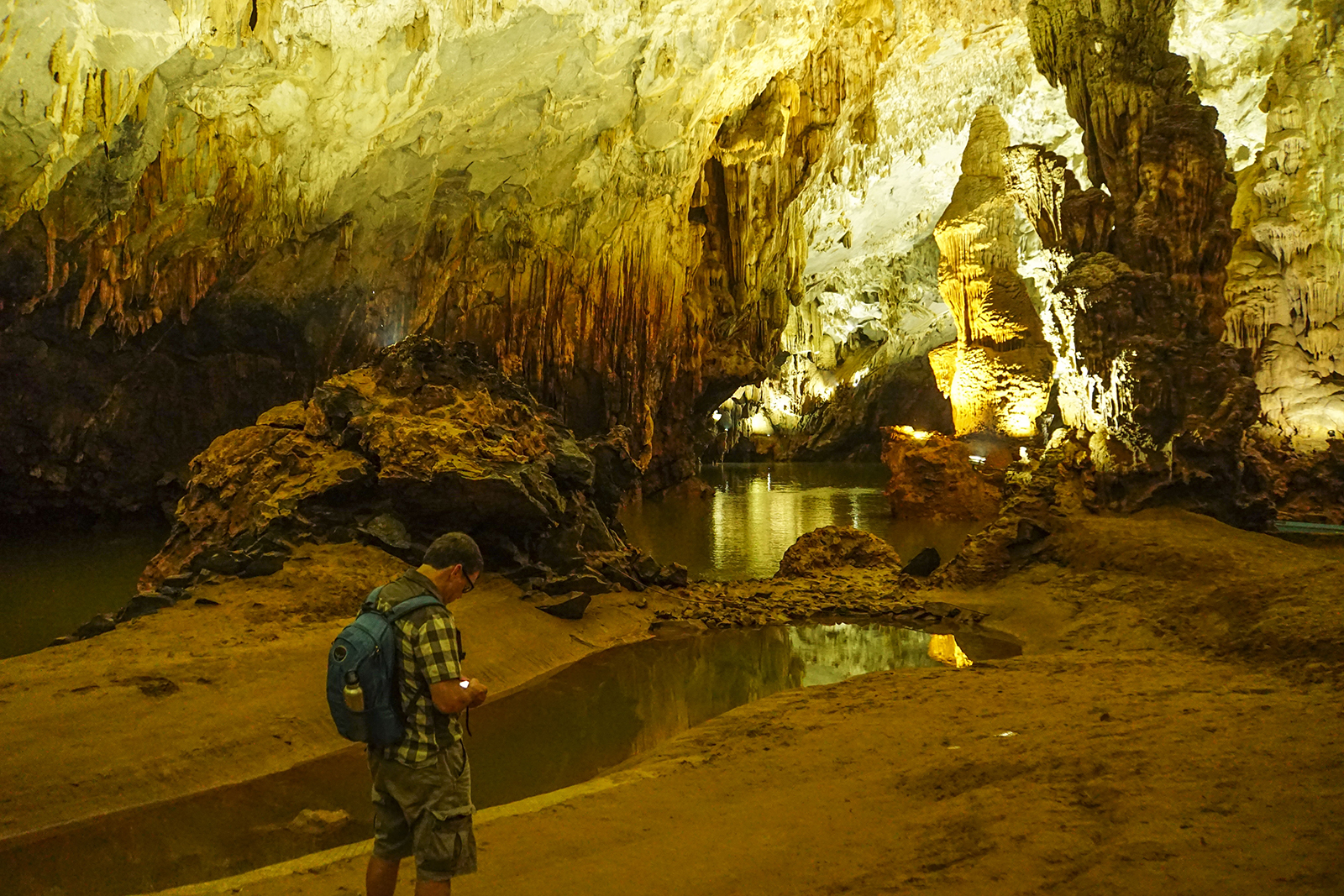 The Carambola Bungalows breakfast was a stupendous way to start the day, with a refreshing morning breeze coming off the Chay River. There is a mix of options from the menu, including crepes and vegetable rice, with smoothies and coffee. All of it worth trying.

We hopped on the free bicycles and headed to the ferry station.

Here’s a tip: The prices of the trips are attached to 12-person boats, rather than per person. So, if the US$15 to US$30 (depending on the length of the journey/number of stops) fee seems a little steep, then hang around the ticket office and offer to split the cost with others.

You will quickly find your US$20 fee whittled down to around US$2 per person. And that is exactly what we did for our boat trip to Phong Nha Cave. Bear in mind, you will still have to pay separate entry fees to get into the caves, which in this case was around US$6 to US$7. 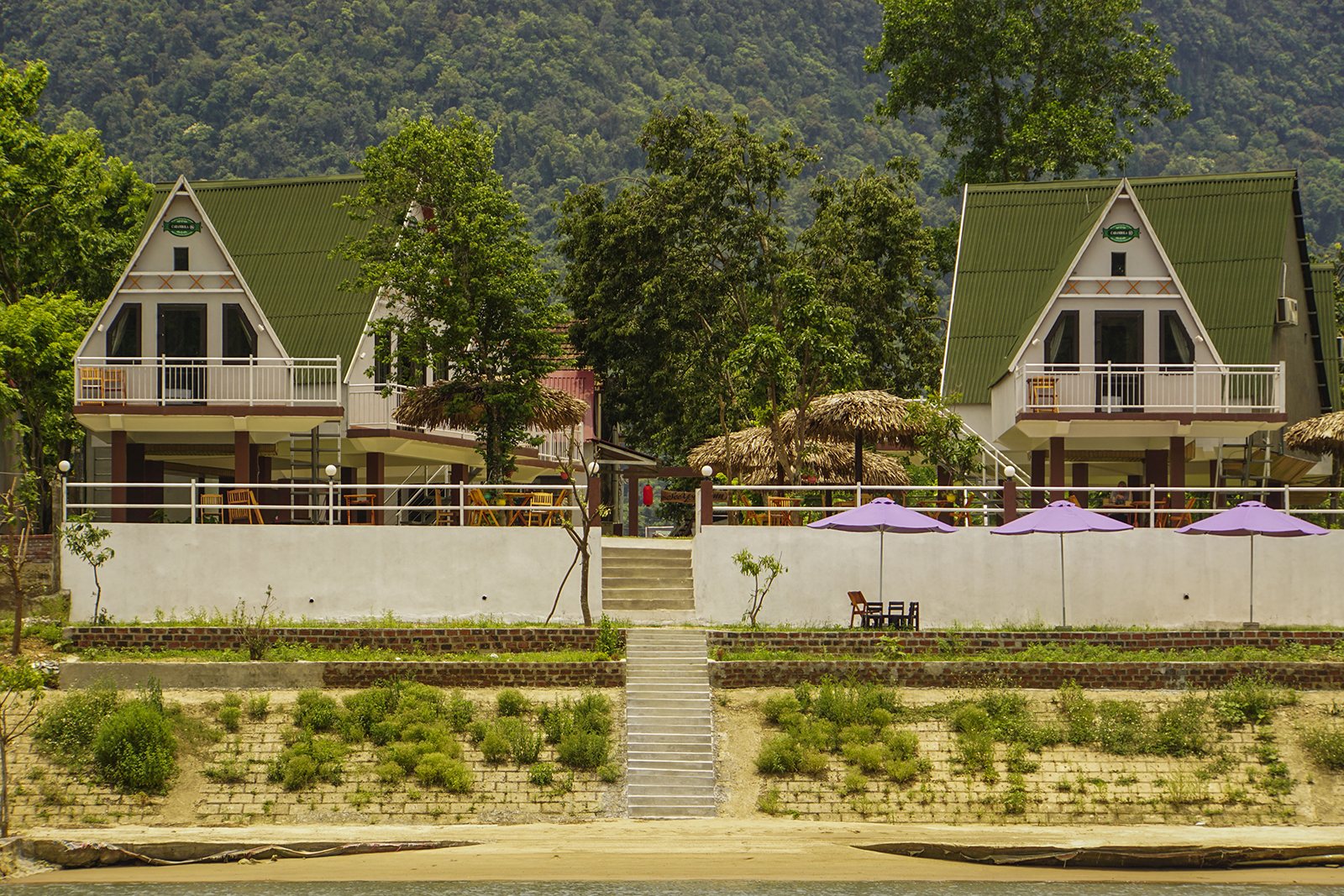 Phong Nha Cave is navigable by an underground river and is said to be the largest of its type in the world. Once again, it is littered with eye-pleasing sights and we timed our tour well when there weren’t so many boats inside. The no-engine rule in strictly enforced, so two people with oars have the energy-sapping task of rowing the boat around two kilometres inside the cave and back again.

Our group opted to do another, lesser-known cave close-by. It is still a steep climb, and if you have any pre-existing health issues, carefully consider whether you should do it. In the heat of the tropical midday sun, it is a challenge.

Phong Nha-Ke Bang National Park is a jewel in Vietnam’s crown. In comparison to the likes of Sapa and Ha Long Bay, the park retains its “hidden gem” appeal.

Even so, the numbers of visitors are firmly on the upward trend. The time to go is right now. Forego the tours, too. Hire a bike and do it yourself. Go off the beaten track and make discoveries of your own.

George Schooling lives and works in Vietnam and can be contacted via email at georgeschooling@gmail.com