Just as quickly as it came, it went. No, not my confidence, although that took a battering in the Sunrise Sprint swim the day before the main event (more about that another day).

I’m talking about the Techcom Bank IRONMAN 70.3 Vietnam — done and dusted for another year, its fourth, and my first taste of triathlon. From a single race in 2015, the event has mirrored the country’s rapid development, quickly becoming a multi-day, family-friendly sports festival.

This year, it attracted over 1,600 participants across four events to Danang, including some of the sport’s highest ranked professional athletes. The likes of 2016 IRONMAN 70.3 World Champion Tim Reed from Australia and fellow compatriot Tim Van Berkel — last year’s winner — were in the field. The two of them would ultimately go on to finish first and second respectively in this year’s event. Reed finishing in a time of 3:54:42, with Van Berkel just under two minutes behind in 3:56:40. New Zealander Mike Phillips rounded out the podium with a time of 4:00:52 to finish third. 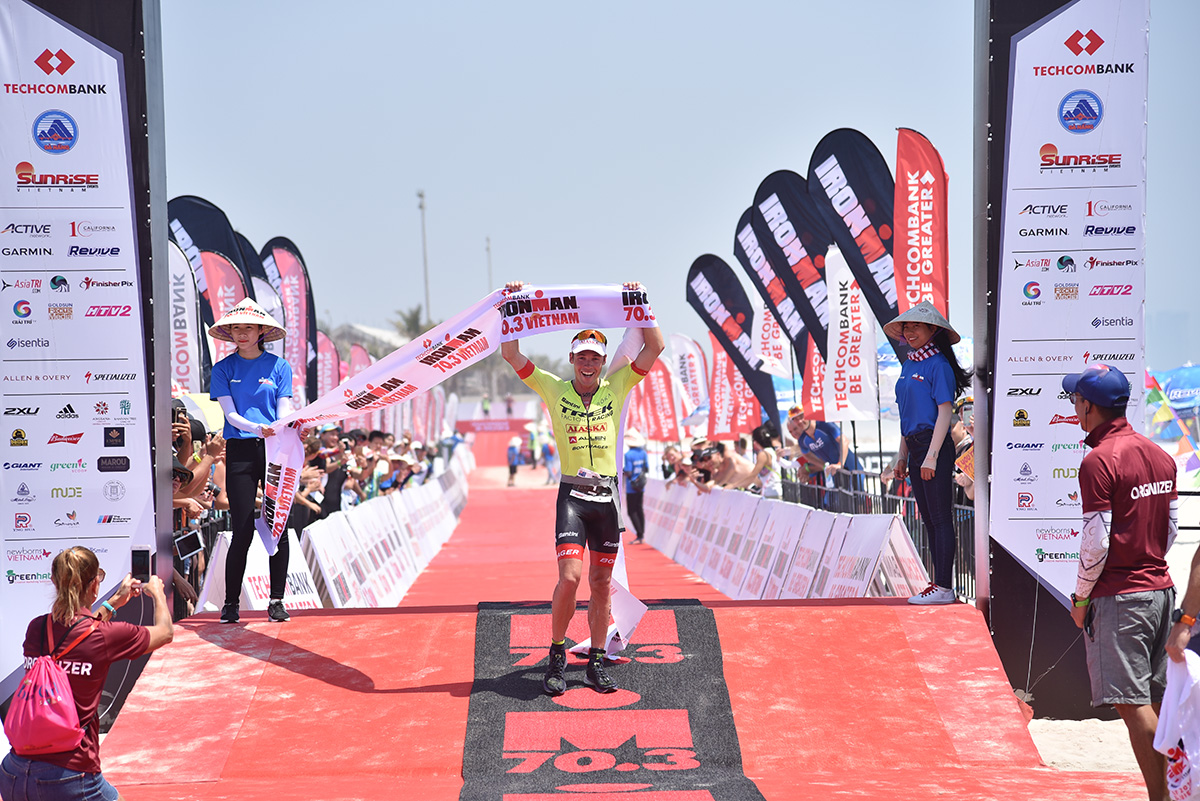 Speaking to The Bureau after the race, Reed says that typically the swim sorts out who is going to be a major player in the race. As it turns out, his prediction was right. He came out of the water just six seconds behind leader Phillips, who covered the 1.9km in 23m 40s, with Van Berkel a solitary one second behind Reed. All three would hold down the top three positions for the rest of the day.

“The swim went perfectly initially,” says Reed, “I knew that my strength against the guys would be my opening 300m to 400m and how well I moved through the surf. I got onto Mike Phillips’ feet and we swapped turns in the lead well to get a little gap on Tim Van Berkel, but I think I let the pace drop too much and it let him (Van Berkel) back into the race.”

Van Berkel, who was back in Danang to defend his title from last year, says that he didn’t have a great start to the swim.

“I lost contact with Reedy and Mike early, but I slowly clawed my way back eventually catching a small wave back into the shore,” says Van Berkel, who believes he was a lot “fresher” leading into the race last year because, unlike this year, he hadn’t competed in an IRONMAN event just two weeks out from Danang. “This year I was pretty pumped to race as I was the defending champion and was ready to go to war, but I think doing IRONMAN in the States two weeks before the 70.3 in Vietnam in the heat, then all the travel home, killed me.” 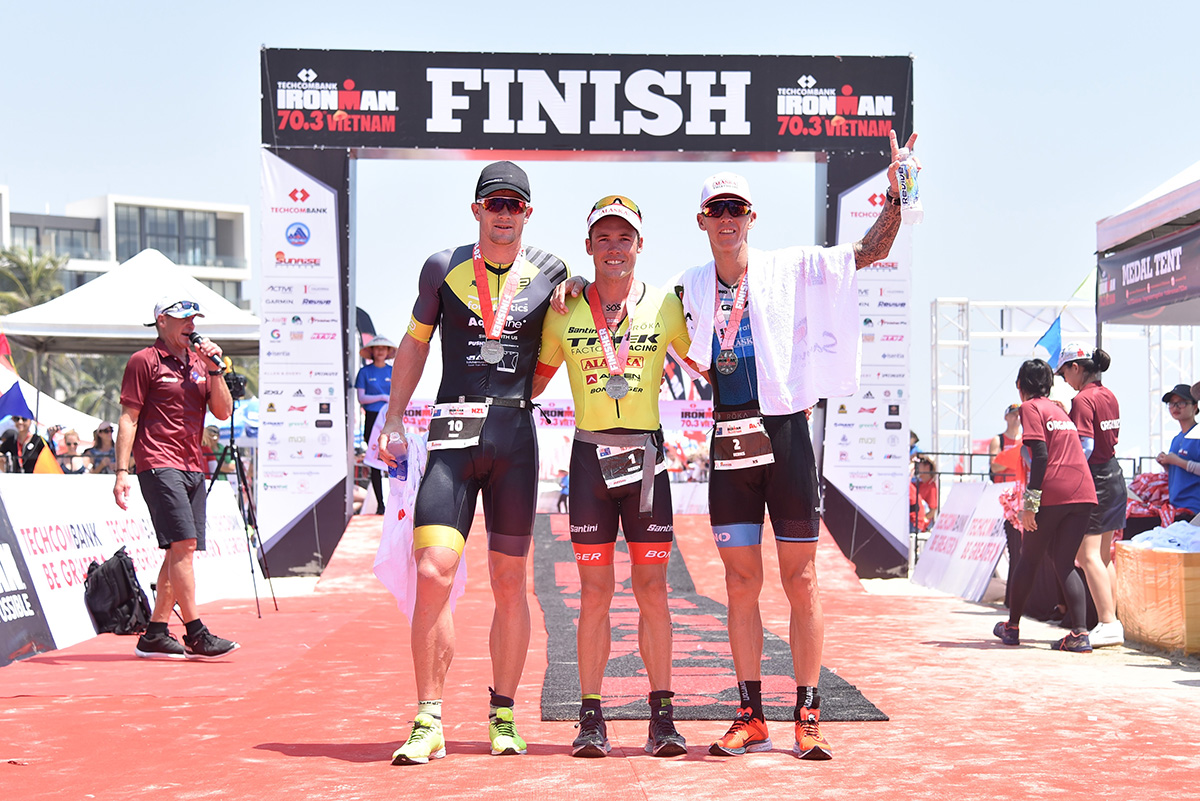 Indeed, Van Berkel had narrowly missed out on a podium finish by just over two minutes in the IRONMAN North American Championship in Texas on April 28. That race involves a 3.86km swim, a 180.6km bike leg, capped with a marathon (42.2km).

“I was fit and ready to give it my all in Danang to try and defend my title,” adds Van Berkel, 33, who at 24 years of age became the second youngest IRONMAN champion ever after winning IRONMAN Western Australia back in 2008. “But the heat! The heat in Asia is brutal, which you don’t get anywhere else in the world. My mates say to me, ‘Gee, you ran slow in Vietnam. What happened?’ I went from racing Tim Reed in the first three-kilometres to survival mode and by halfway, I thought I was going to melt. It’s bloody hard.”

Leading from the front in the run, Reed could have put that information to good use; if only he had known that Van Berkel was feeling the pinch.

“Van Berkel always scares me in hot races,” explains Reed, of Van Berkel’s tendency to get stronger the longer a race goes on. (Van Berkel placed seventh in the IRONMAN World Championship at Kona in Hawaii in 2014 and won the IRONMAN Asia-Pacific Championship in Cairns, Australia, in 2016). On the bike, I really worked for the first 30 minutes to try and get clear of the guys because I was nervous about leaving the race to the run after racing at St. George (Utah, USA) just over a week before Danang.” 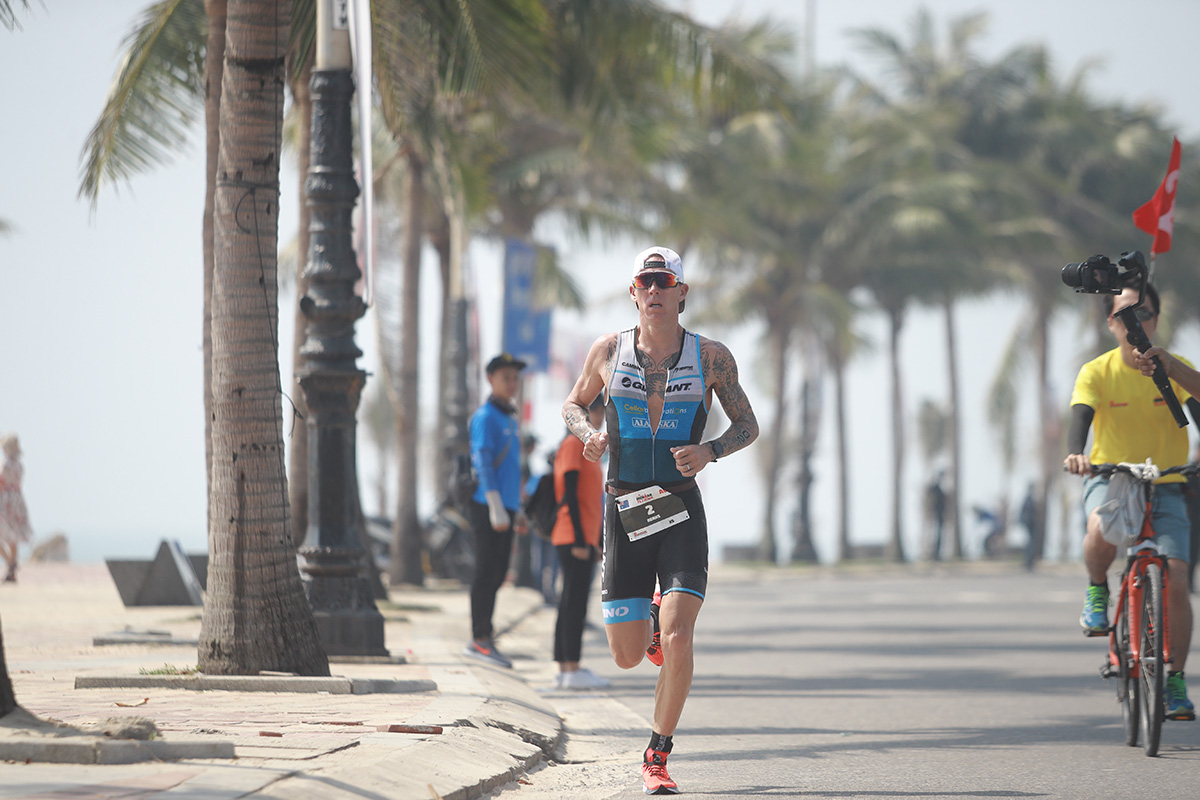 For the third straight year in Danang, the Vietnamese were the most-represented nationality at IRONMAN 70.3 Vietnam with more than 630 athletes participating from the host country — an indication of the growing popularity of triathlon here and the exciting future that lies ahead for health and fitness pursuits. Running, cycling, and in particular, swimming, aren’t national sports in Vietnam, far from it, but as the quality of life continues to improve for many, so too is the number of people taking up sports like triathlon. Overall, close to 60 countries were represented at the event this year.

Techcom Bank’s head of marketing, Nguyen Thi Van Anh, attended the event as a representative of the major sponsor and says that after witnessing the athletes’ hard work, she has become more interested in triathlons and has vowed to begin training so she can take part from time-to-time. This is precisely what Techcom Bank hopes to achieve in the wider community through its sponsorship of events, such as IRONMAN 70.3 Vietnam, the Ho Chi Minh City and Hanoi international marathons, and next year’s IRONMAN 70.3 Asia-Pacific Championship in Danang. 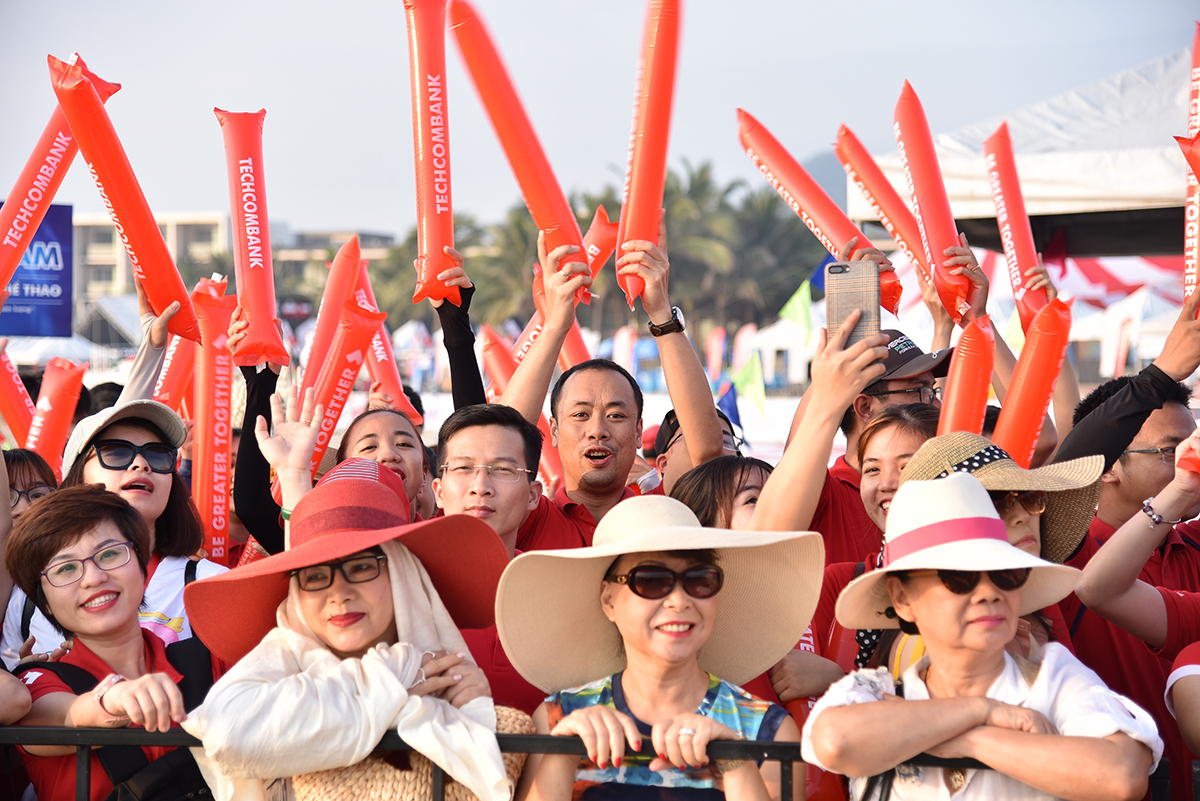 Covid-19 causes DHL Express Thailand to go cactus, but in a good way as sales to Vietnam spike

“We are committed to bringing Vietnamese a better life and helping them to realise their ambitions and dreams,” says Ms Nguyen. “The number of Vietnamese athletes has increased tenfold compared to the first version of the event in 2015, which shows that the event has become more and more attractive to Vietnamese sports enthusiasts who wish to challenge themselves mentally and physically.”

Ms Nguyen adds that Techcom Bank’s involvement as one of the event’s title sponsors is more than just that, she says that it demonstrates the organisation’s commitment to employee support in the hope of inculcating sportsmanship among them: “Our highest level leaders and our employees and their children have participated in this event and will do so as they try to be greater together.”

Indeed, all the hard work going on behind the scenes is gaining attention, not least from among the athletes. For Reed, this year’s winner, the most striking thing he noticed this year in Danang compared to his previous visits, is the growth in participation numbers of the Vietnamese that Ms Nguyen talks about, remarkable given that just five-years ago, events of this magnitude didn’t exist.

“To have over 600 Vietnamese triathletes racing is incredible,” he says. “Danang is fantastic. I love the people, the beach, catching up with my fellow Team Alaska triathlon teammates, and the challenge of a very tough, but fair race. I’ll definitely be back next year.” 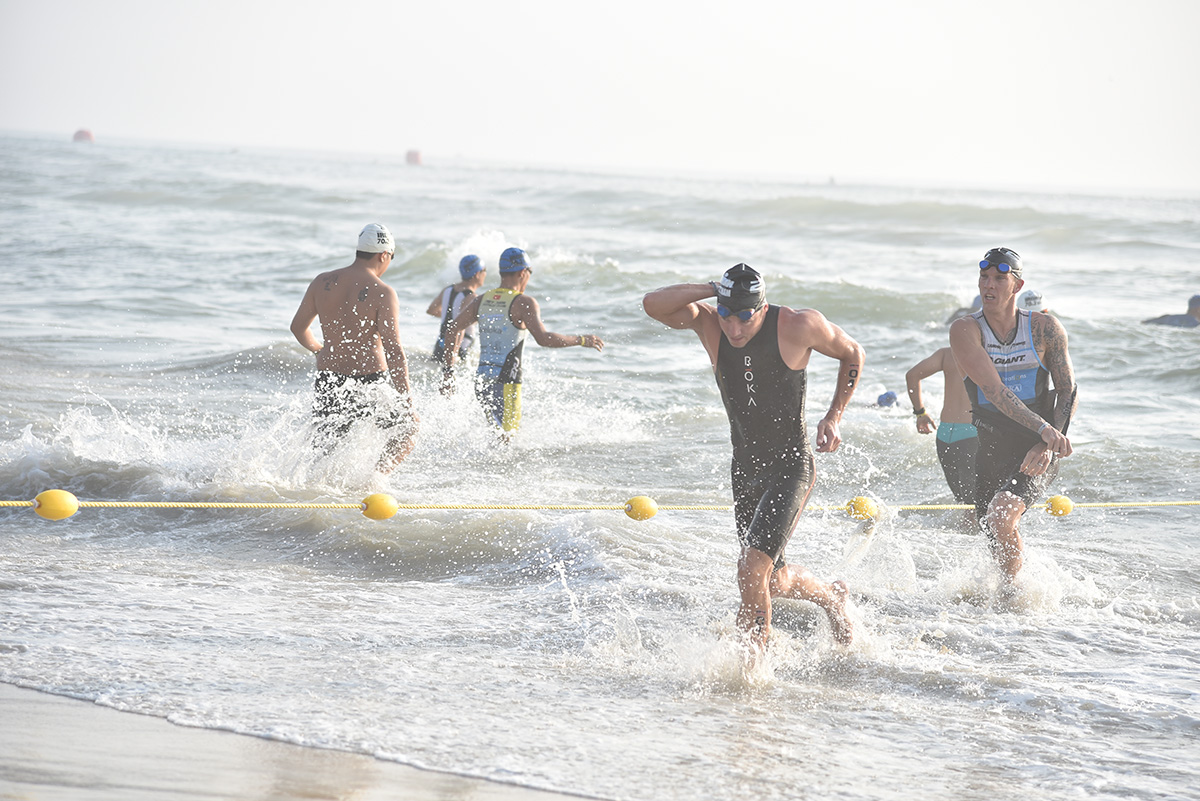 Van Berkel’s opinion of the event and location echoes Reed’s — his response also bound to warm the hearts of his Vietnamese supporters.

“I love the Vietnamese culture,” he says. “I’ve always enjoyed my time in Danang. It’s a beautiful part of the world to hold such a race as this. Every year it gets bigger and bigger.”

Next year Danang is hosting the IRONMAN 70.3 Asia-Pacific Championship with organisers expecting twice the number of competitors to converge on the beachside city.

“Of course, I’ll be coming back,” says Van Berkel when asked about his plans for next year. “There will be a lot up for grabs.”