This is one experience you probably ought to chase down in Ho Chi Minh City — drink a Vietnamese iced-coffee in the back of a converted semi-trailer. One enterprising chap has plonked a Freightliner prime-mover on a corner block in Binh Tan District in the city’s west and turned it into a cafe. 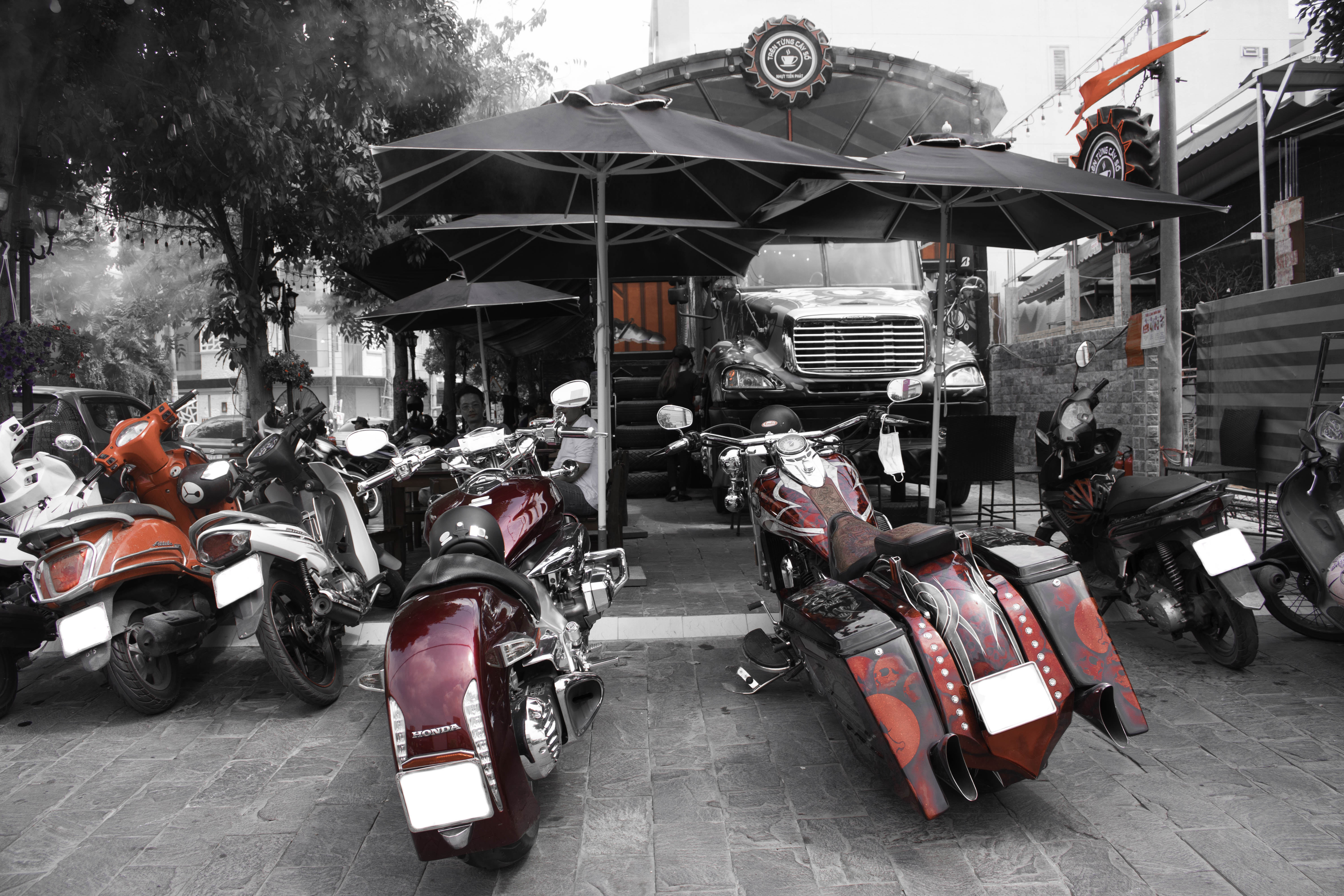 The cabin and the space which was once the sleeper compartment for the driver, is now the small kitchen where the barista knocks up around 400 coffees a day. The cafe — Tren Tung Cay So — has only been open since the beginning of the year and is now gaining a lot of traction on social media, and why wouldn’t it? Under the hood, which once housed an enormous Cummins diesel engine that powered the big rig up and down the highways of Vietnam, are the air-conditioning units that keep the container at the back cool. 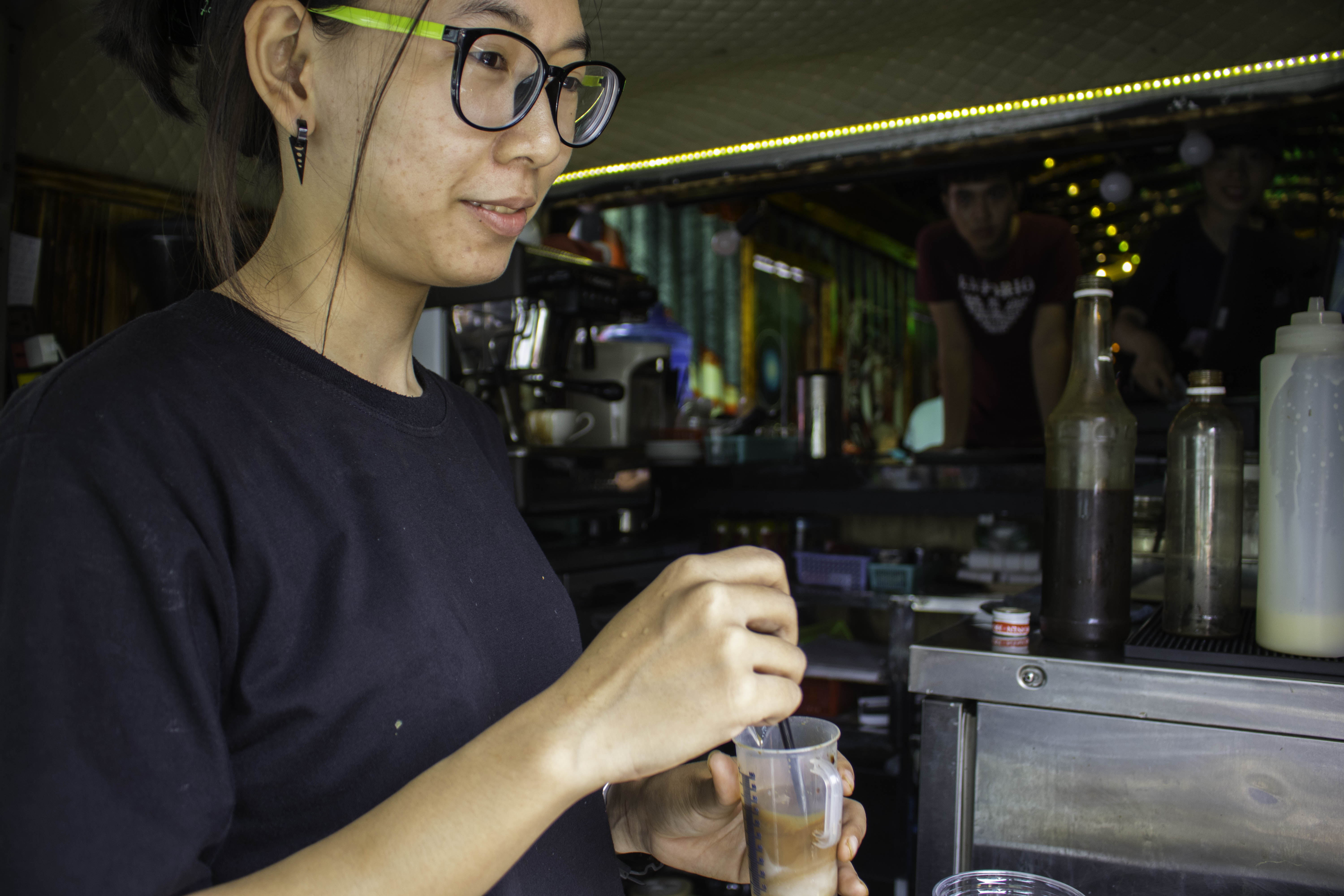 The owner’s ingenuity doesn’t stop there. Entrance up into the cafe is via a set of steps made out of tyres that lead you into a converted container lined with colourful decal designs that look from a distance like graffiti sprayed on the walls. 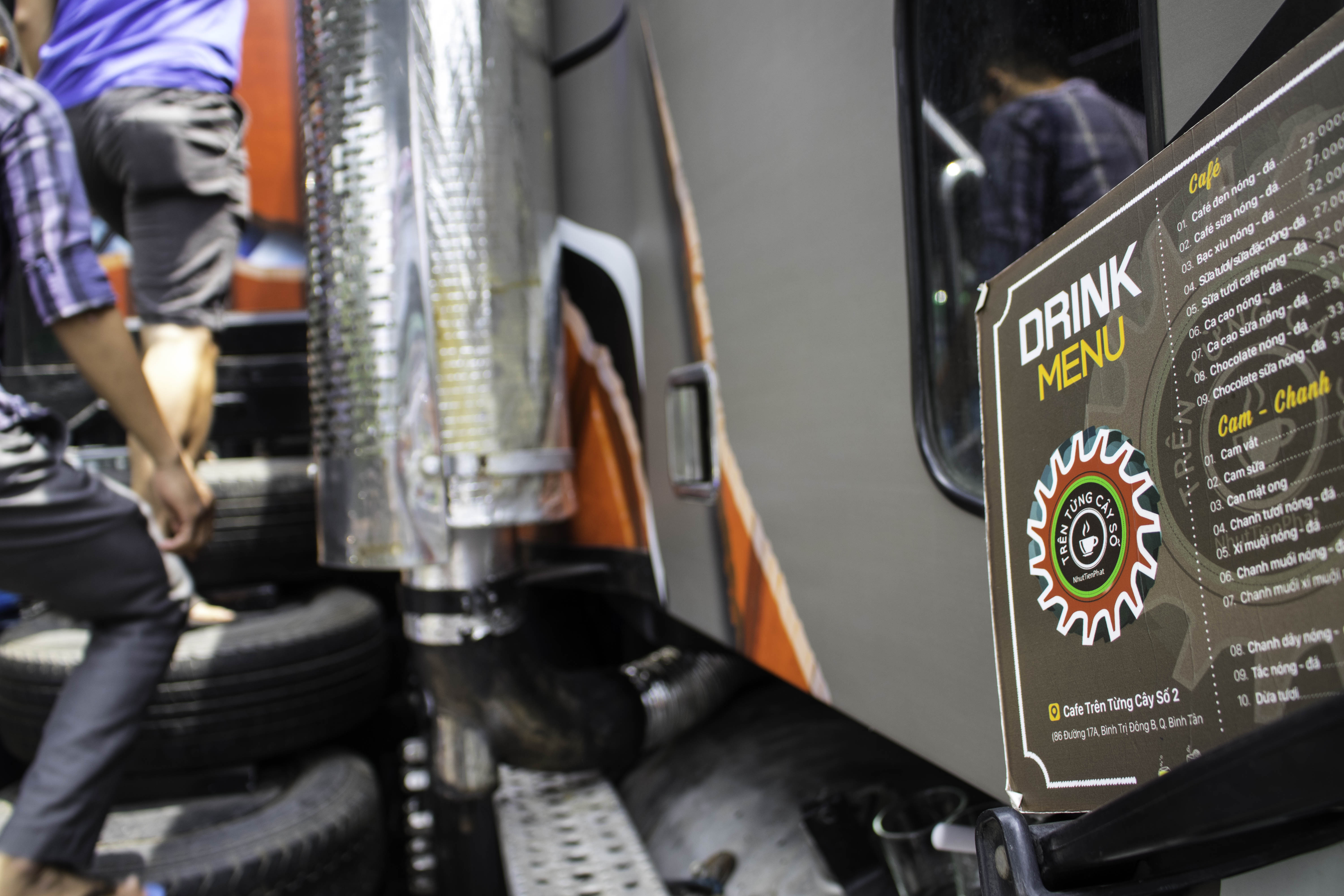 The container…err…cafe has a surprisingly spacious feel, perhaps enhanced by the fact that the floor space has been widened and a retractable roof added. At one end is a large flat screen TV that really gives this space its added man cave ambiance, something noticeably missing from the more upmarket cafe scene here which is becoming saturated with sterile Scandinavian-inspired designs and co-working spaces with rock hard benches and impersonal “working spaces”. This is definitely a place to go and hang out with your mates for a bit and kick some tyres. It begs you to get your hands dirty. 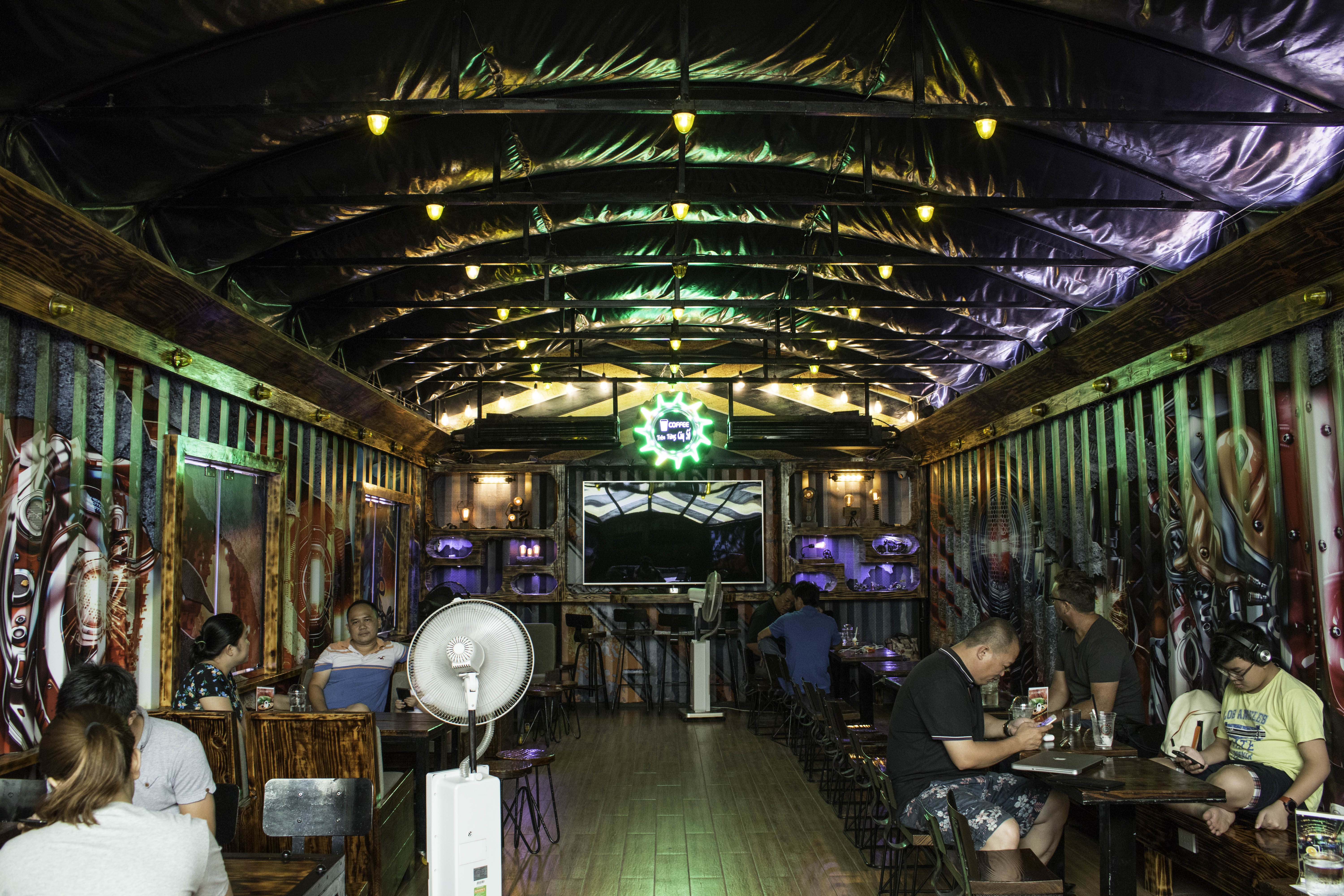 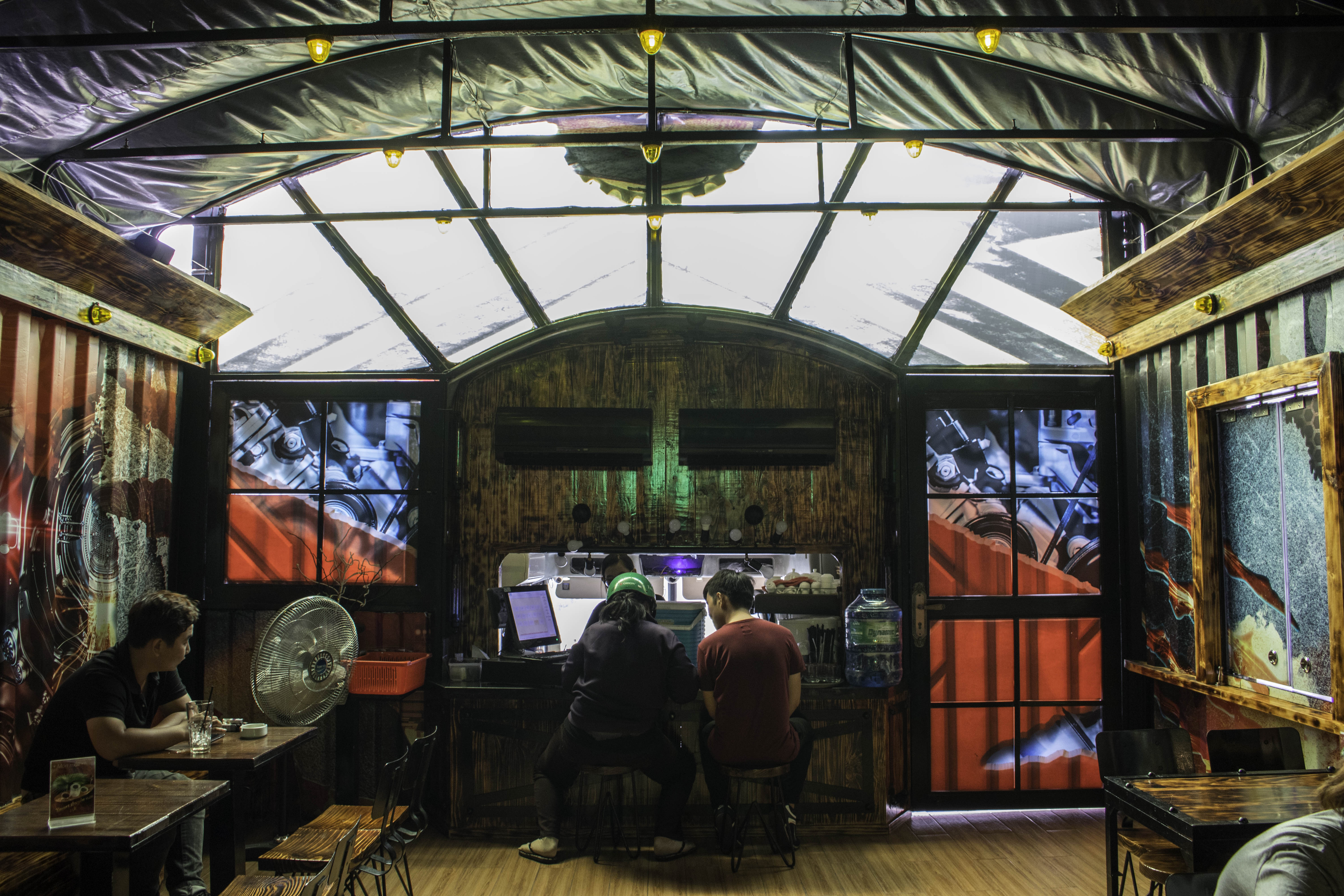 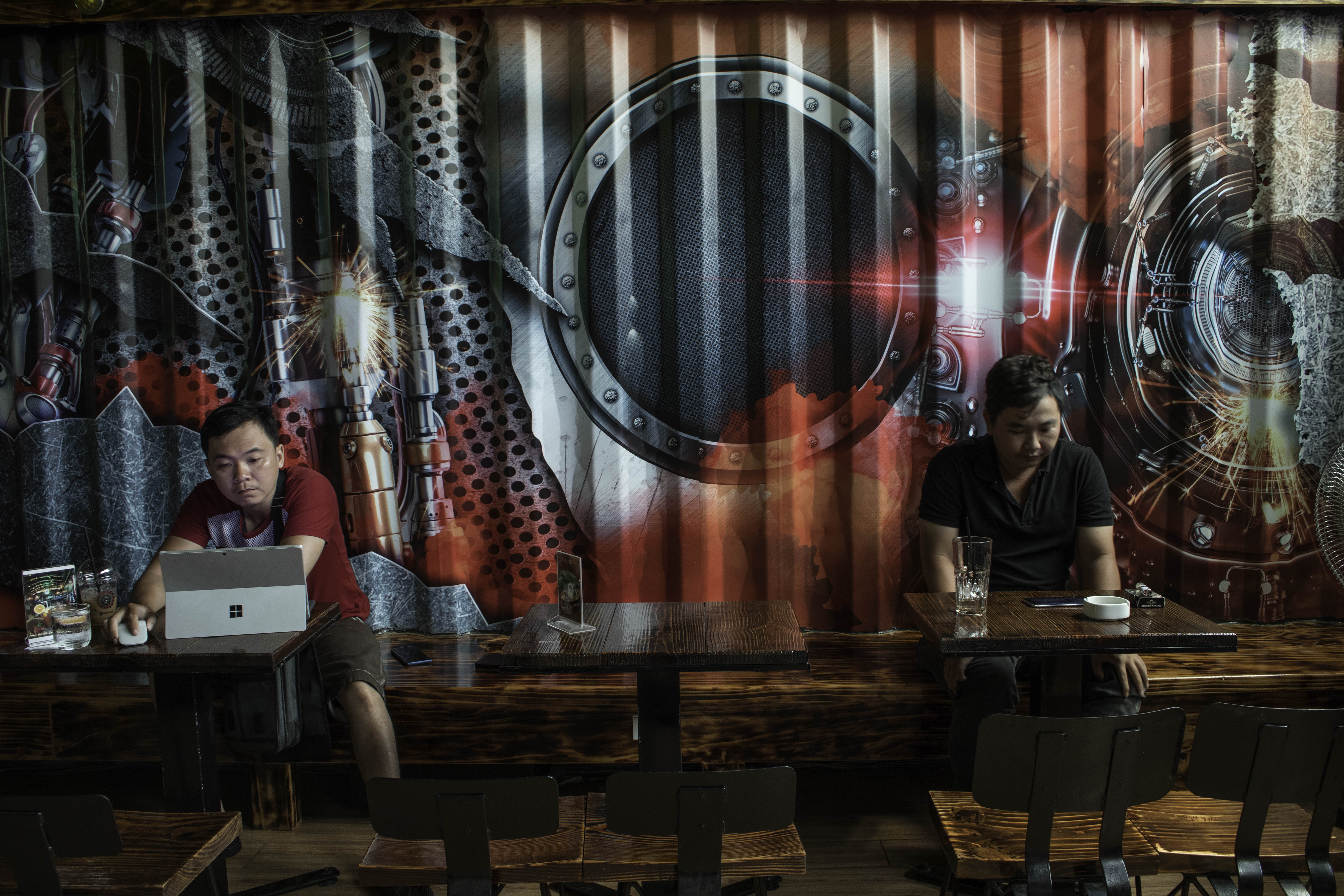 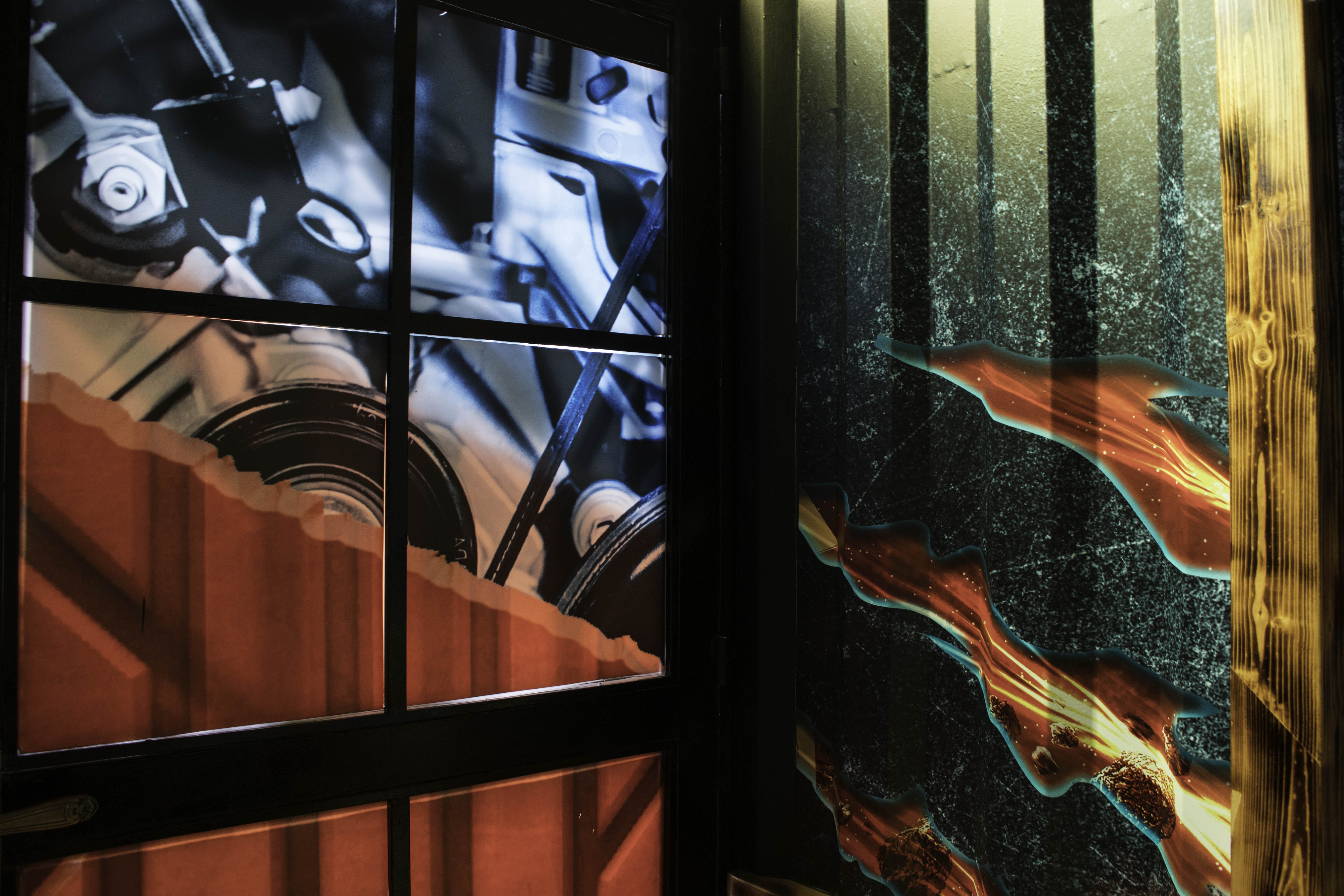 Beneath the container is an even more impressive man cave with entrance via the opposite side of the prime-mover down a few steps. Inside houses a BMW R25 motorcycle on display, a small bar (alcohol not for sale), and one of the best uses of 44-gallon drums we’ve probably ever come across — lounge settees and coffee tables with the Australian and American flags painted on them. Claustrophobes don’t fear, a window runs the length of one side of the “cave” and floods the space with plenty of natural light. Of note, is that this set up is very sturdily made, so there’s no chance of the cafe above falling in or the prime-mover magically reversing back over you. This thing has been made to last. 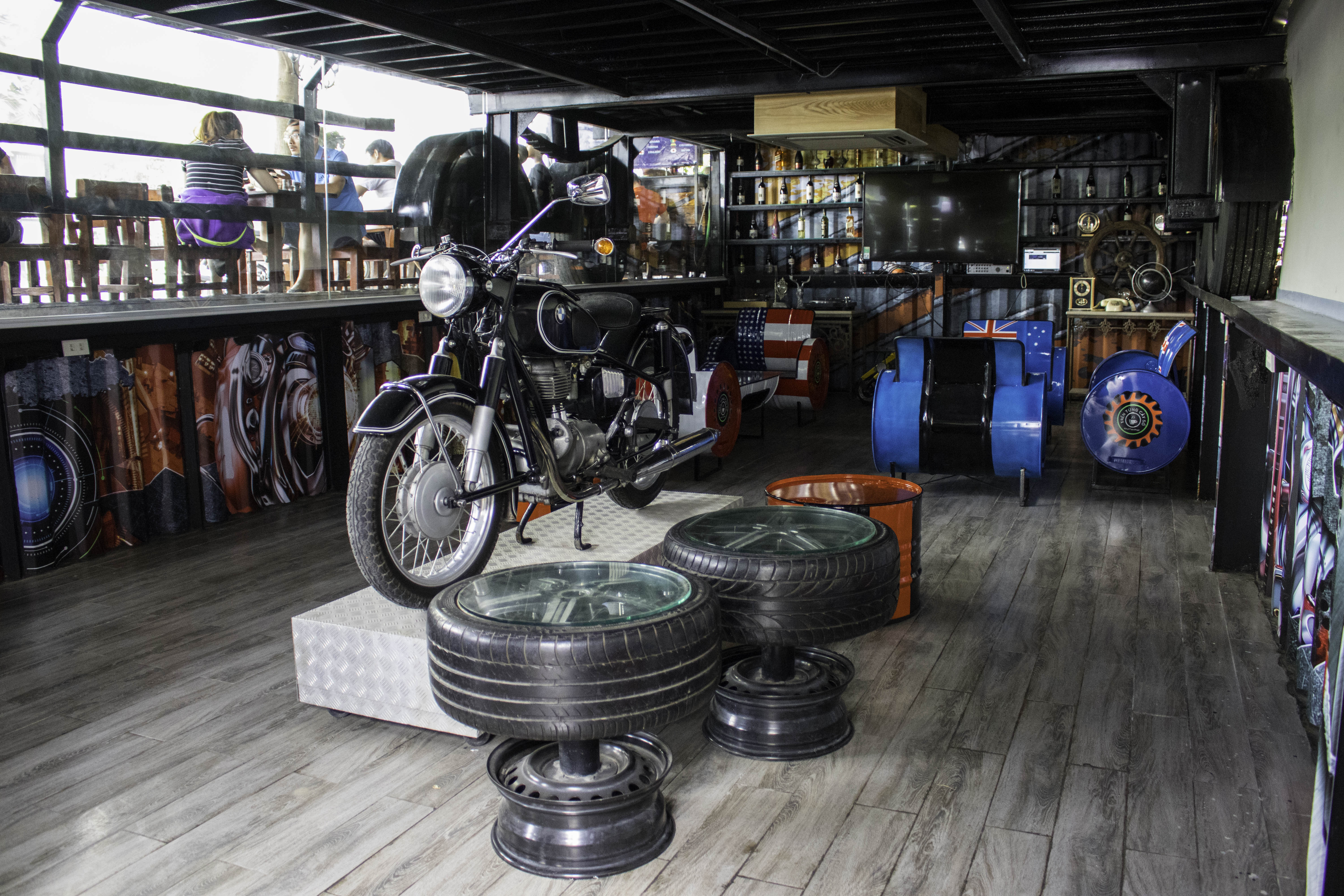 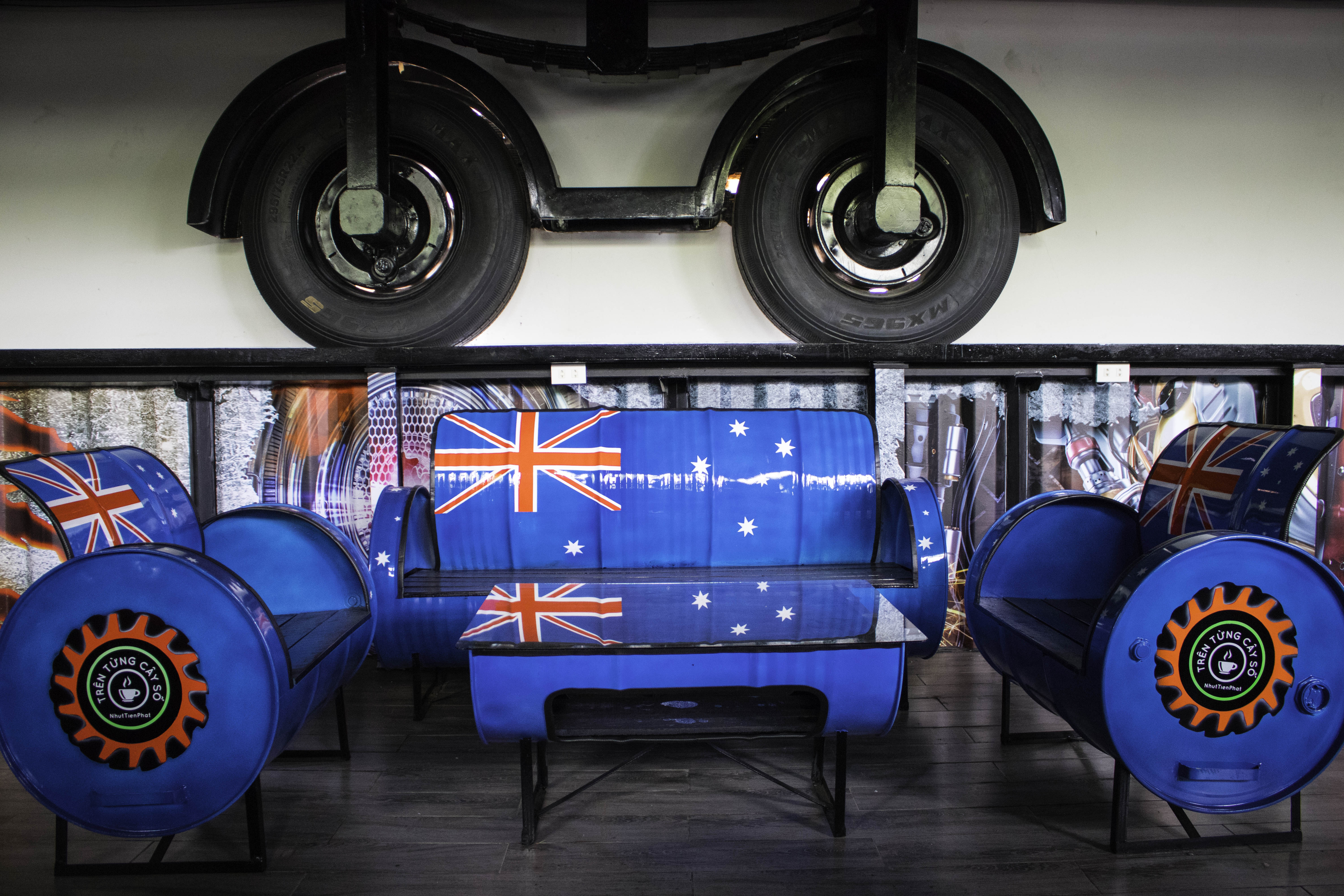 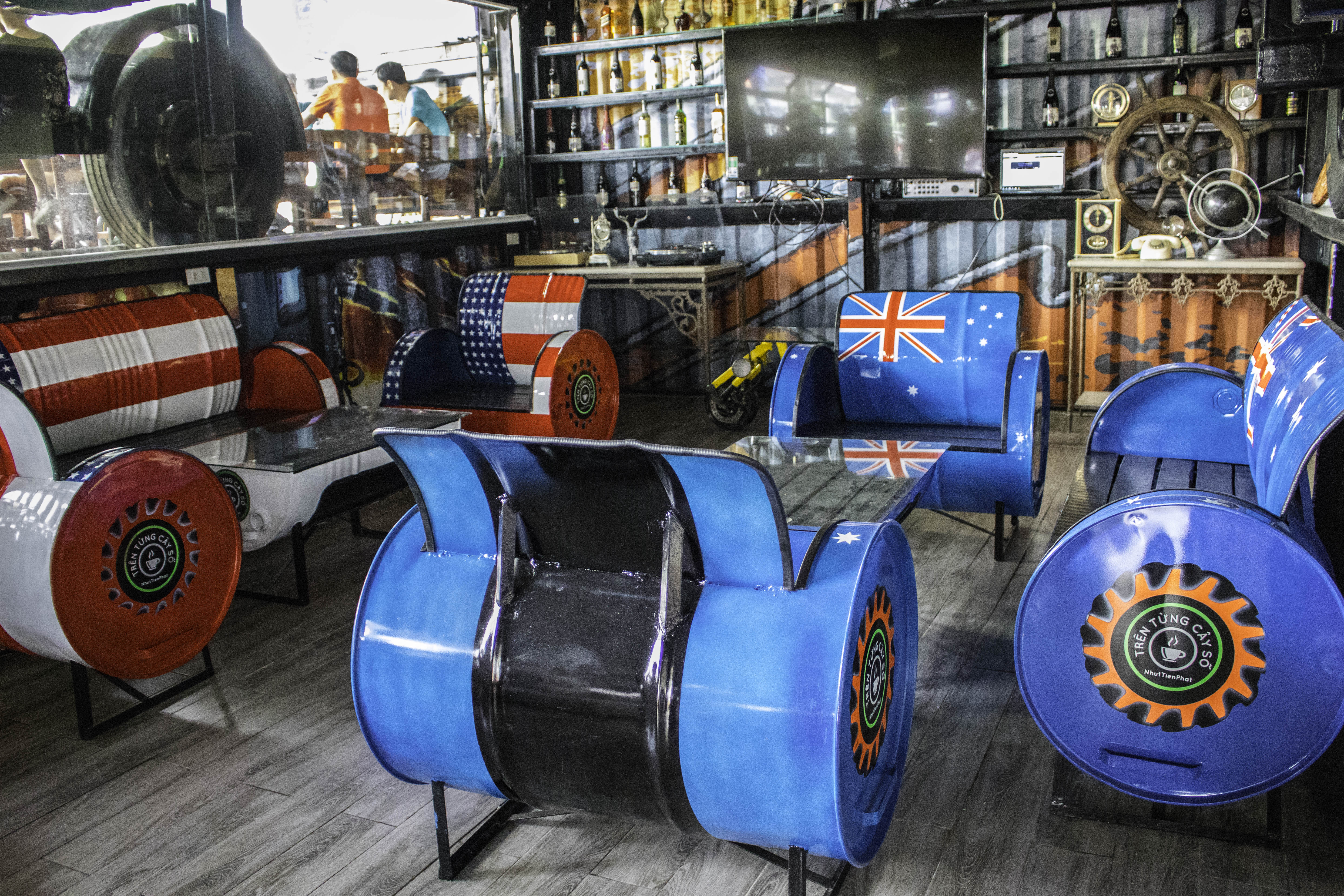 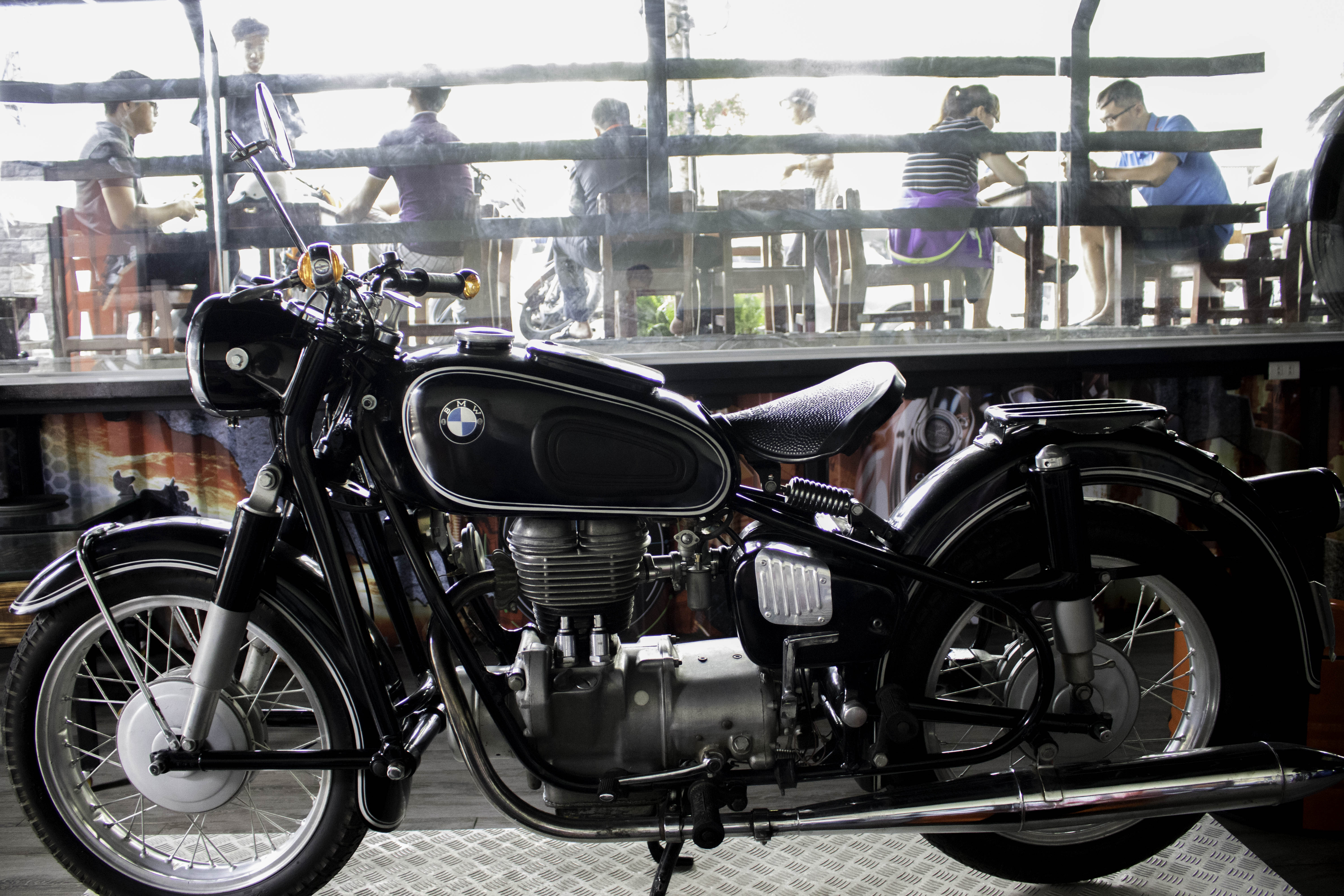 Once you’re done kicking tyres, peering at small engine components, slapping the drums and just generally feeling man again, you can head back upstairs into the container for a caphe sua da (VND27,000 / US$1.20) or sit outside beside the rig in the shade. This truck cafe only does drinks, but the menu is extensive offering soft drinks, juices, smoothies, teas and hot chocolates with nothing over VND47,000 (US$2.10).

On this trip, there were no “double-bubbles” (police) at roadblocks handing out tickets, and for once, the thought of ending up under a truck was a pleasure. You  copy that? 10/4 big buddy. Over and out. 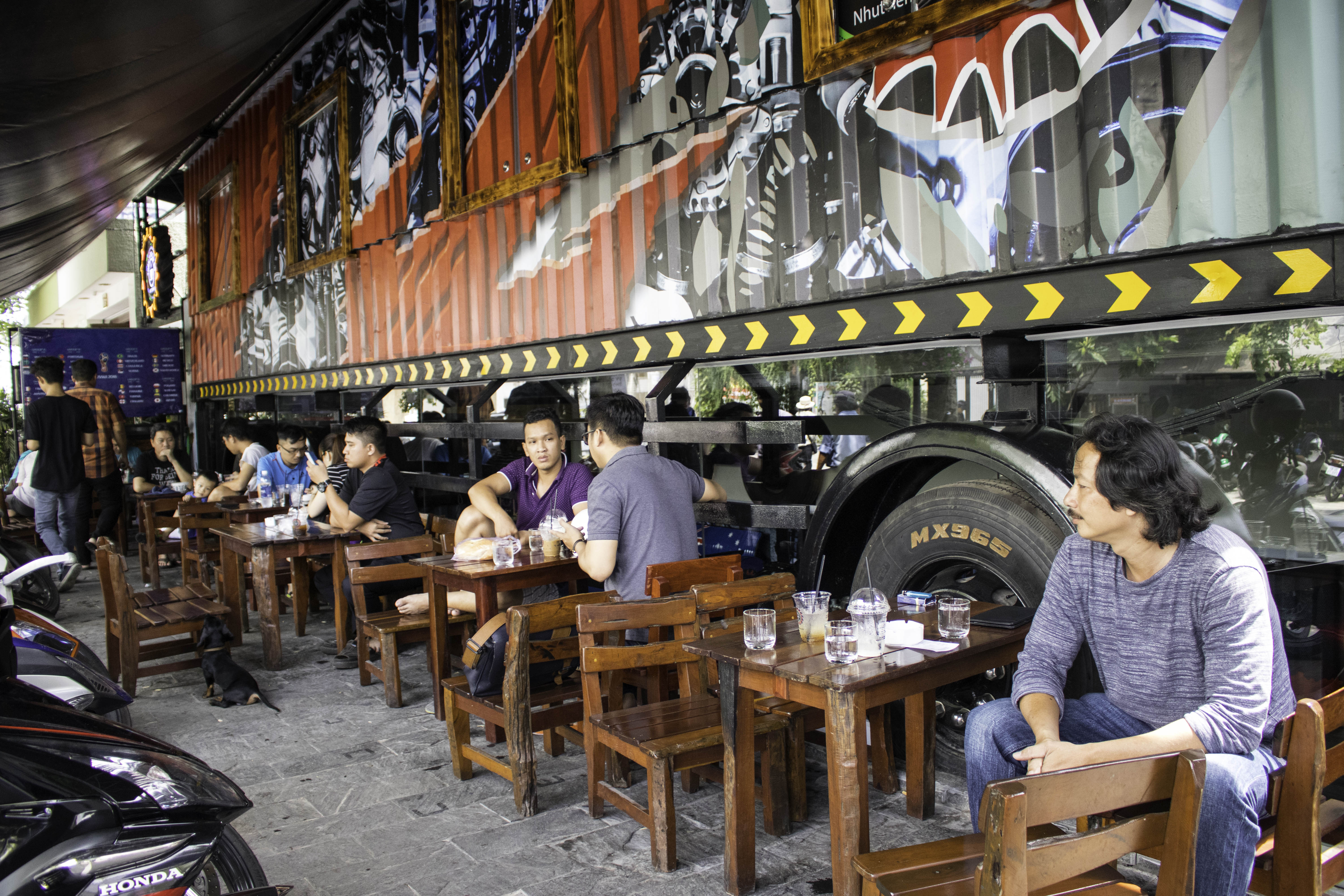 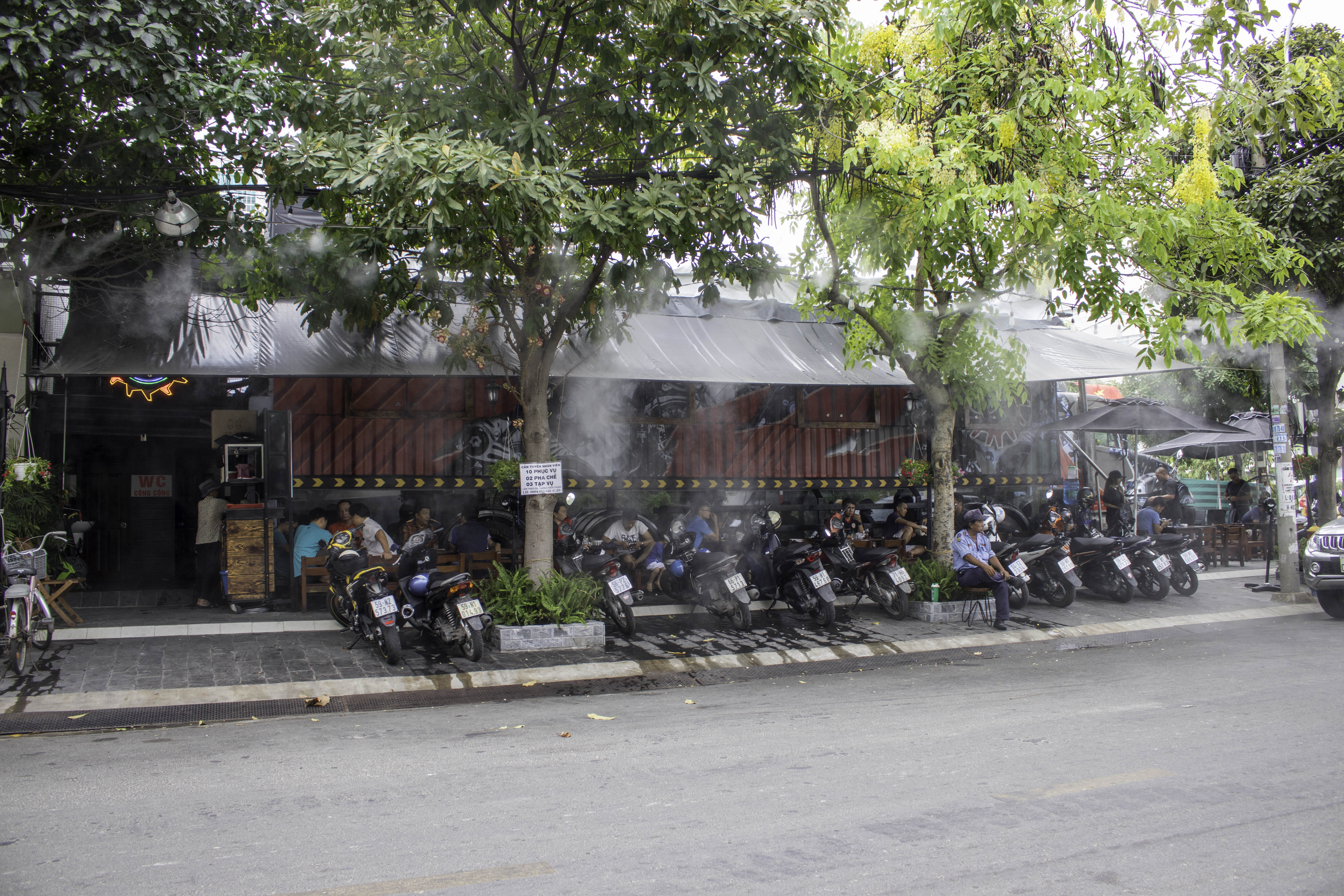 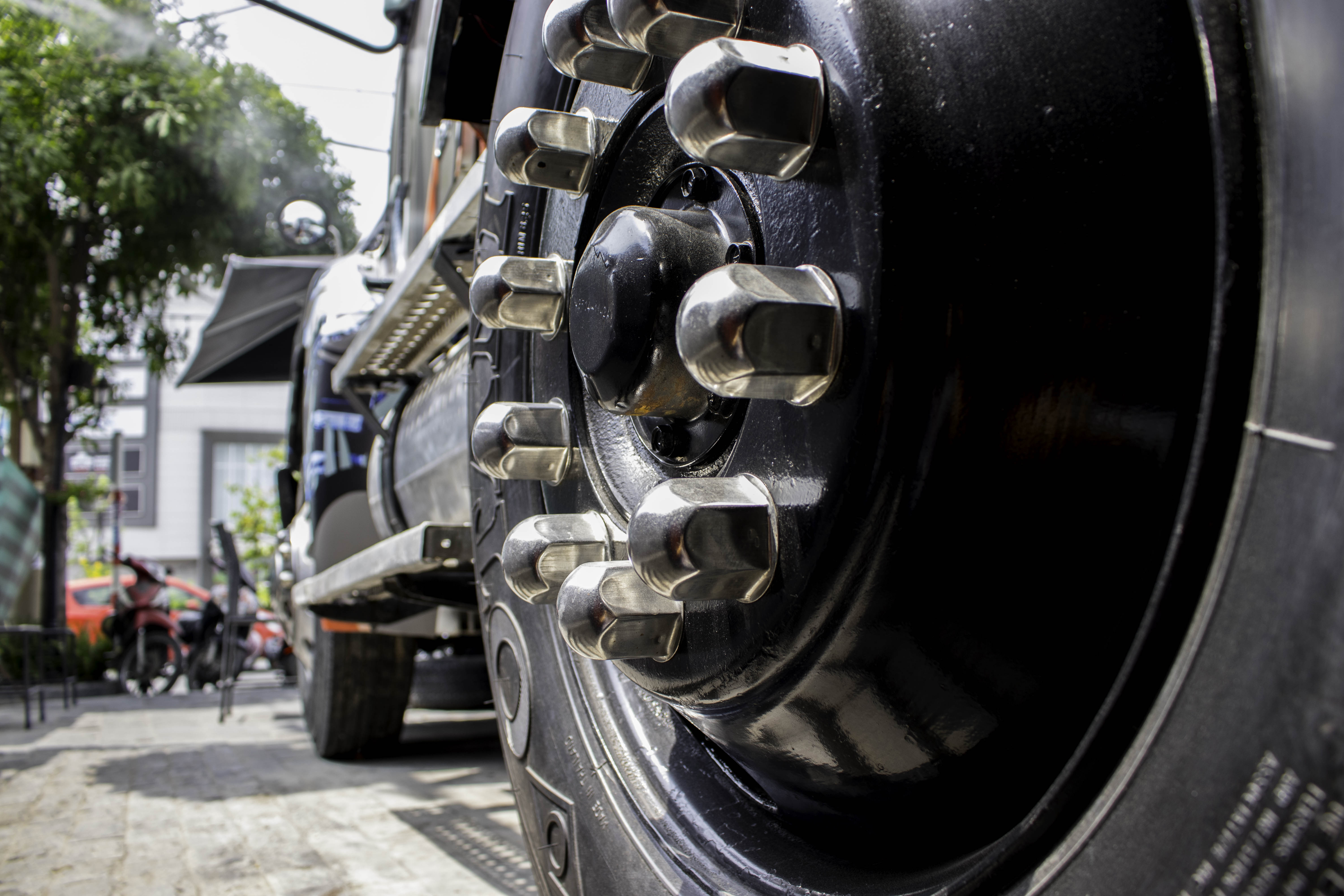 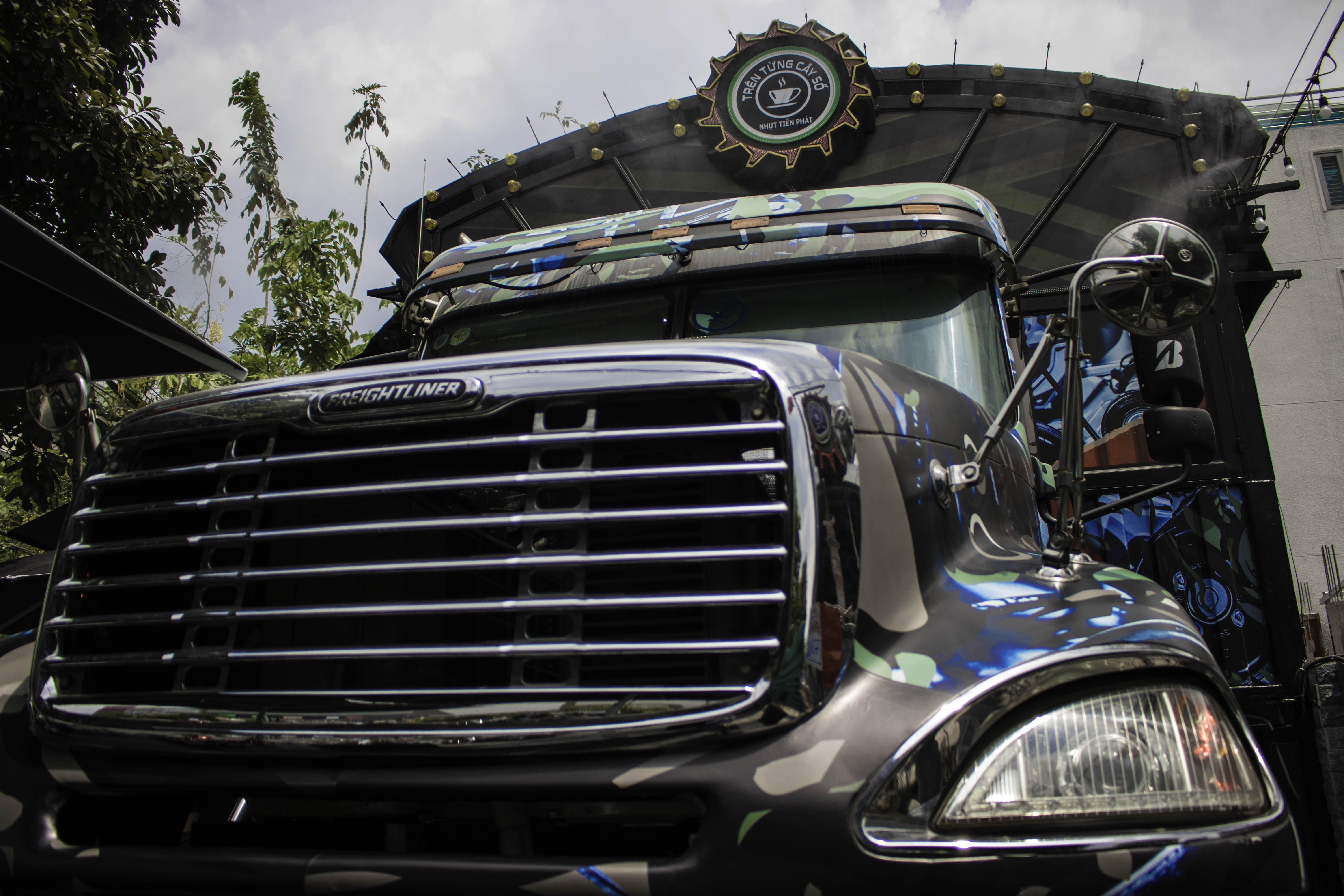