Triathlons. How do I get into them?

It was somewhere around 2014. Vietnam was in the midst of a beer club boom brought about by a growing young middle class in their early to mid-20s who were looking for something in between cheap traditional beer drinking places and more expensive bars and clubs.

It started with the Vuvuzela chain of beer clubs which helped introduce to Vietnam a new way of drinking. The drink of choice — Tiger or Heineken — was still the same but how it was drunk was different.

What had emerged were rambunctious beer clubs that brought beer drinking off the streets and into more sophisticated venues with DJs and light shows and renditions of ‘Happy Birthday’ with sparklers and cakes whenever a patron was celebrating a birthday.

They were places for families and couples just as much as they were (or still are) for co-workers and friends to catch up over a beer.

Beer clubs managed to draw in traditionalists who were used to drinking with their friends and co-workers around small plastic tables and chairs on the sidewalks, while attracting a new breed of beer drinkers who wanted something refreshing but with prices they could afford. 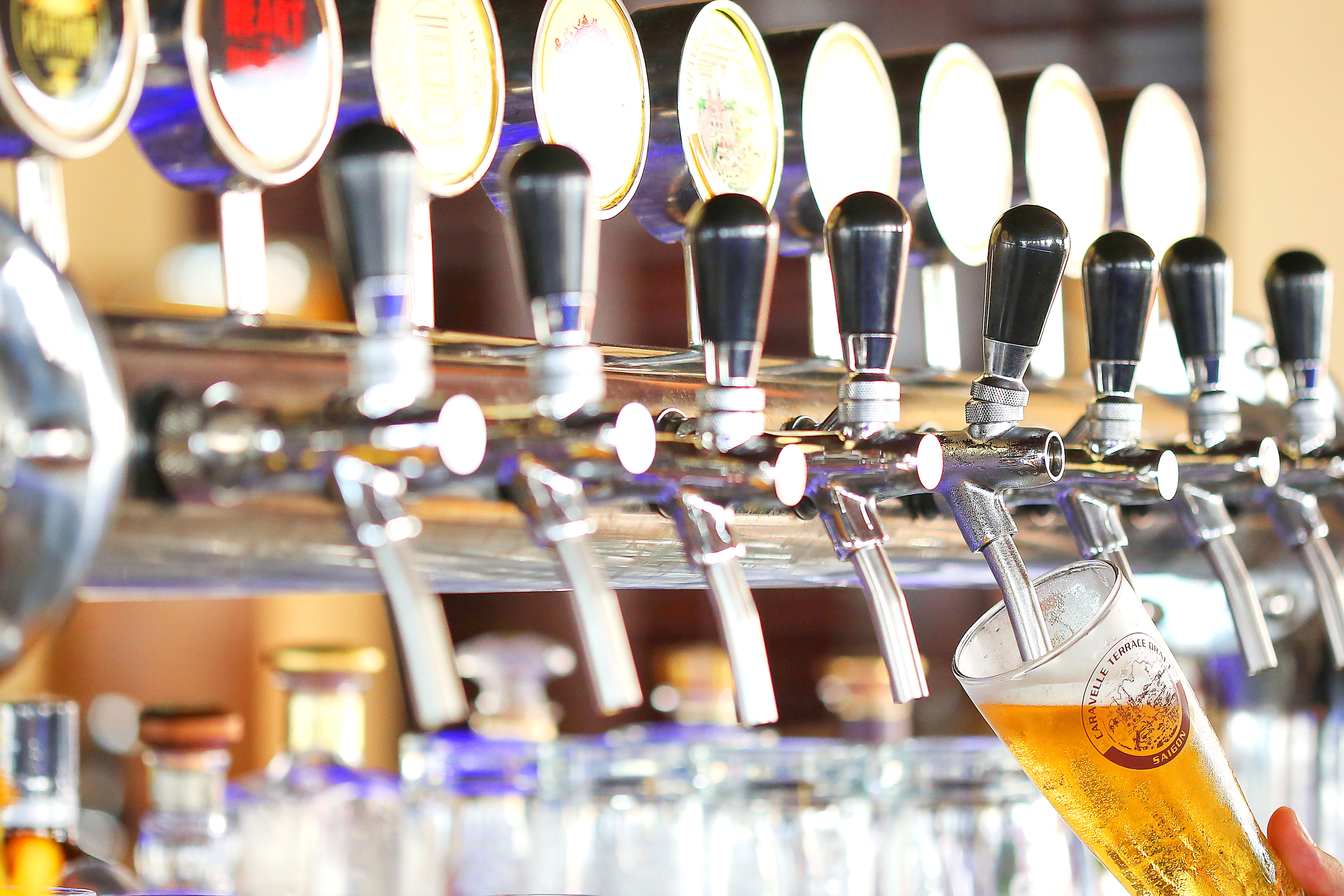 Beer clubs reflected change in consumer spending behaviour in Vietnam. In hindsight, they indicated that great change was afoot in Vietnam’s hospitality sector.

Around the same time, Vietnam saw its first craft beer come onto the market. Platinum, brewed by Irish-born brewmaster, Michael Comerton, who had more than 20 years experience in the industry, was the first beer of its kind that made its way into establishments around Vietnam.

Quick on Platinum’s heels were other brewers who have made a name for themselves in a relatively short period of time since. Brewery’s like Pasteur Street Brewing Co., Heart of Darkness, LAC, and East West Co., among others, have all since helped put Vietnam on the international craft brewing map.

Now, it’s the Caravelle Saigon’s turn, says Alex Hepworth, the director of sales and marketing at the Caravelle. “The Caravelle has always been firm supporters of expert craftsmanship, unique flavours and local business. We’ve enjoyed welcoming locally-brewed beers into the hotel’s bars and restaurants, but there comes a time when you want to offer your own.” 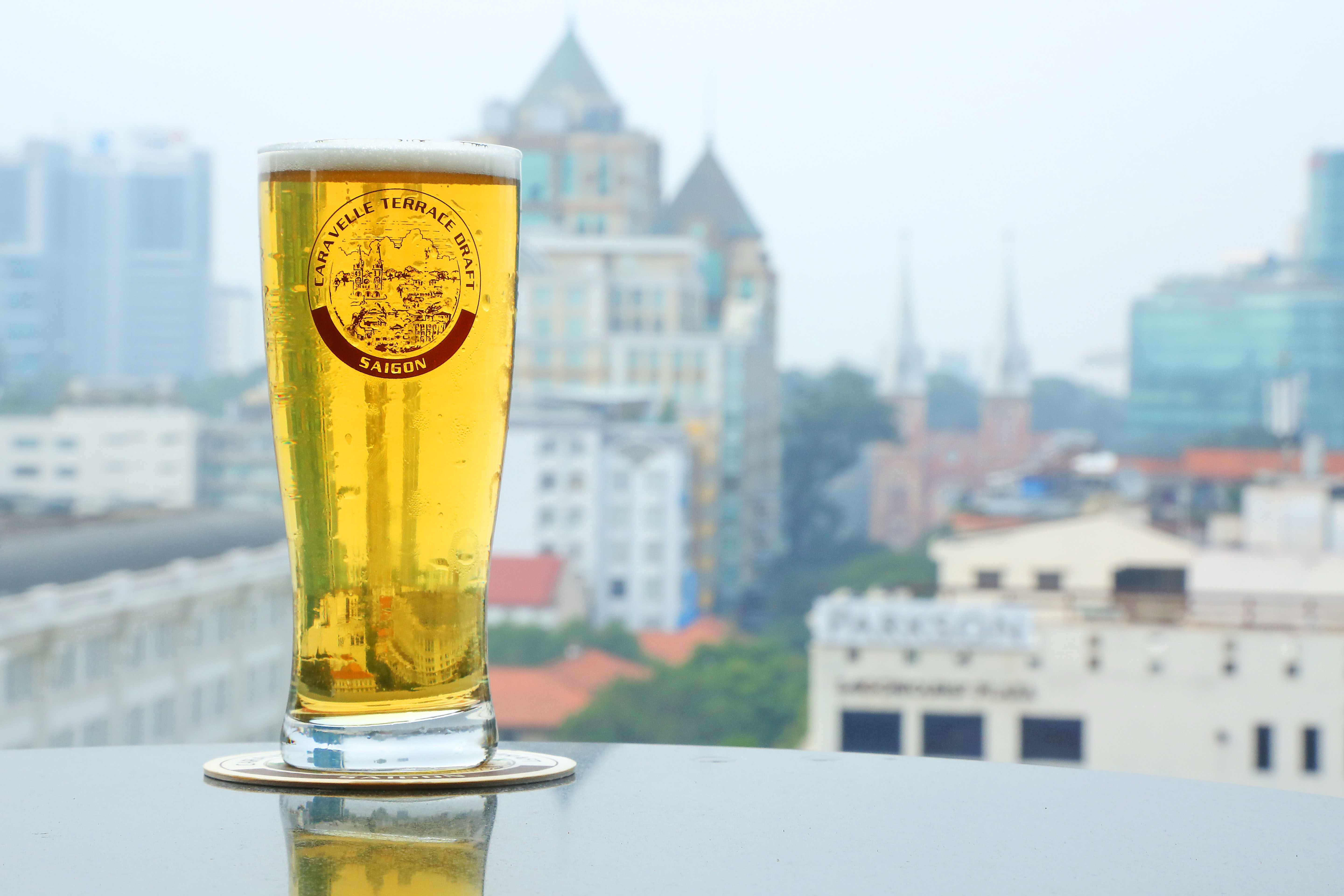 After what started out as a conversation over a beer between the Caravelle’s general manager, Michael Robinson, and Comerton, the hotel recently launched its very own draft beer — Caravelle Terrace Draft.

“Like many beers, it was developed over a few beers,” says Comerton of the new Caravelle Terrace Draft. “It evolved from a conversation between myself and the team at the Caravelle. It was about what kind of beer we could sell or serve that represents beers that people were drinking here in the 1960s and 1970s.”

The result is a blend between bia hoi, the beer that the Vietnamese would typically drink with its lighter flavours, and the ‘hoppier’ flavours non-Vietnamese tend to prefer.

“We used some German hops to give it a nice spicy note and at the back of the palate maybe a little bit of mint comes through,” explains Comerton, “but it still has quite a hoppy character balanced by the malts.”

An important part of the attractiveness of a brand is its label, and this was not lost on the team at the Caravelle.

Robinson approached Ho Chi Minh City-based bartender and artist, Richie Fawcett, and asked if he was interested in coming up with a picture for the the hotel’s new brew.

Fawcett is well-known for his sketches of Ho Chi Minh City’s streets and its evolving skyline, which have been put together in a book  — Cocktail Art of Saigon Drinks Manual — paired with cocktail recipes created by Fawcett that best exemplify the history, character and feel of the streets, districts and buildings of old Saigon and the new Ho Chi Minh City.

Cheers to the new Caravelle Terrace Draft, officially launched this evening at Sunset in the terrace of the Caravelle, funny enough! Since 1959, the bar has drawn people from all over the world to its open- air tables and breezy verandah. Saigon Saigon played a prominent role as a haven for wartime journalists in the 1960’s. The heritage wall along the staircase leading to the entrance, highlights pivotal moments in he Caravelle history. Today, Saigon Saigon still offers its unrivaled views of the city’s changing skyline, Lam Son Square below, and the Norte Dame Cathedral to the West. With all that said, I am truly honored and humbled to be invited to be a minor contributor to the brand label design of this historic moment in the life of the Caravelle, and wish them all the very best success with the new beer…very refreshing I have to say, so get down there for sunset and try for yourself. Cheers Saigon Saigon! #saigon #saigonsaigon #saigonterracedraft #history #modernhistory #amomentintime #feelingwow #artist #grahamgreene #thequietamerican #partofhistory #dreamcometrue #thankyou #design #speechless #beer #great #sunset #now

“It took three different attempts to come up with a picture that would be suitable for the label,” explains Fawcett of his design. “There’s the Notre Dame church featured, along with the former CIA building at what is now 22 Ly Tu Trong where that famous last helicopter lifted off from on April 30, 1975.”

“I’m honoured and delighted to be part of history here in such an iconic bar where many of the journalists during the war came to meet and talk, so I’m deeply happy that my design has come out okay, and the beer is delicious, too.”