There’s perhaps no other comfort food more missed by Brits living abroad than fish and chips. It’s understandable. They invented it and it’s still regarded as the national dish by many. Done right, it tastes great. What’s not to like about deep-fried potato and a slab of piping hot battered fish drizzled with freshly-squeezed lemon juice or a dash of vinegar?

But done wrong, fish and chips is horrible. It’s a greasy, oily mess that can leave you feeling bloated and pledging never to do it to yourself again. No wonder in Australia, that other nation of fish and chip loving connoisseurs, it’s endearingly referred to as ‘greasies’. 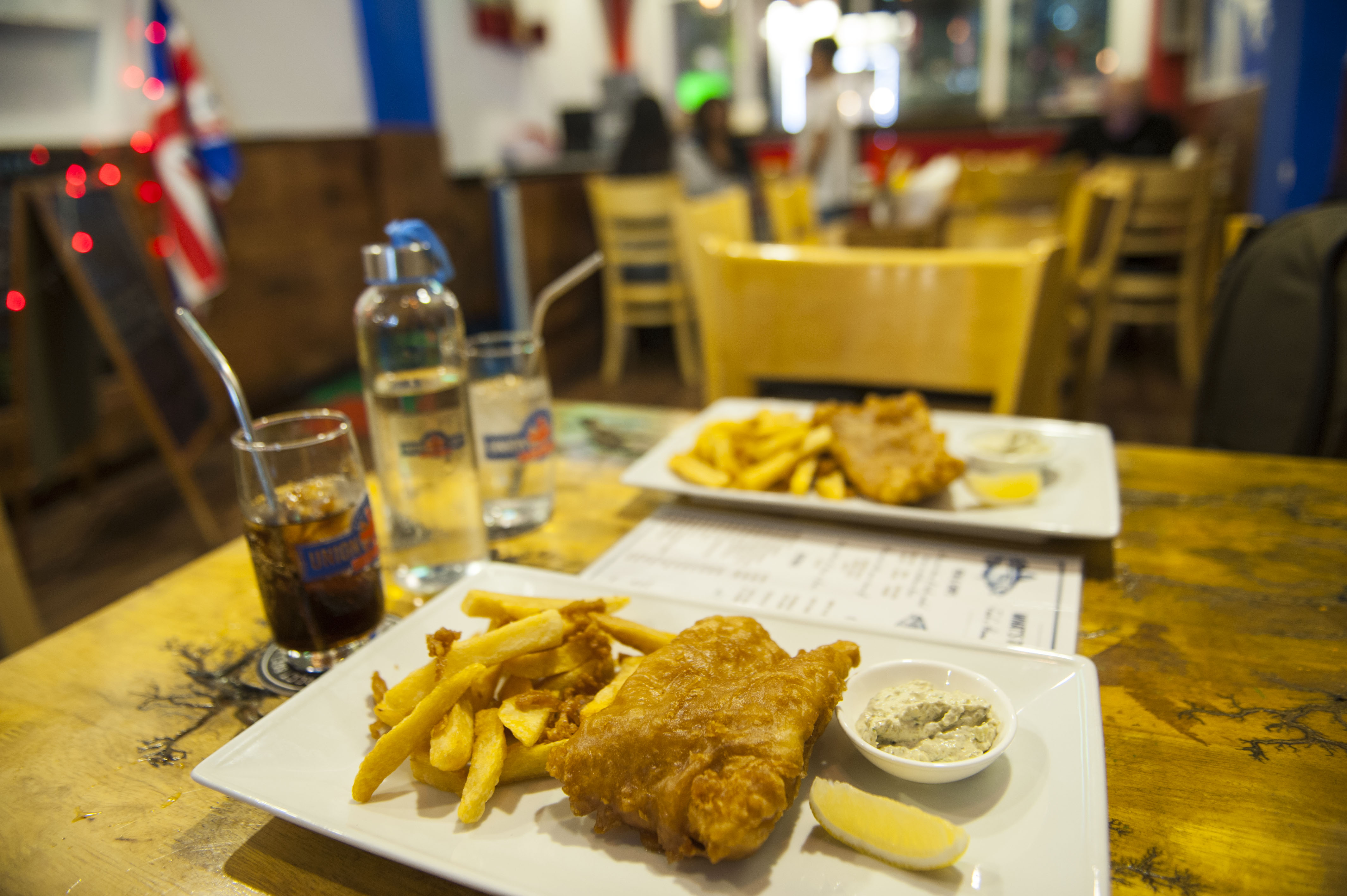 There’s more to it than just taste, though. Eating fish and chips ignites fond childhood memories. Fish and chip shops have been around longer than McDonald’s and KFC, so there’s a strong emotional attachment to our greasies. It’s in our DNA.

For a long time in regional Australia, where I’m from, fish and chips was the only take-away you could get, save for the Chinese lemon chicken on the specials board at the local pub. Dining out really meant a trip into town for fish and chips.

It was also used as a reward for good behaviour by parents. Mostly though, it was so mum could have a night off from the kitchen. Midweek football training on a cold and wintery evening was always capped with a piece of fish and a serving of ‘minimum’ chips. 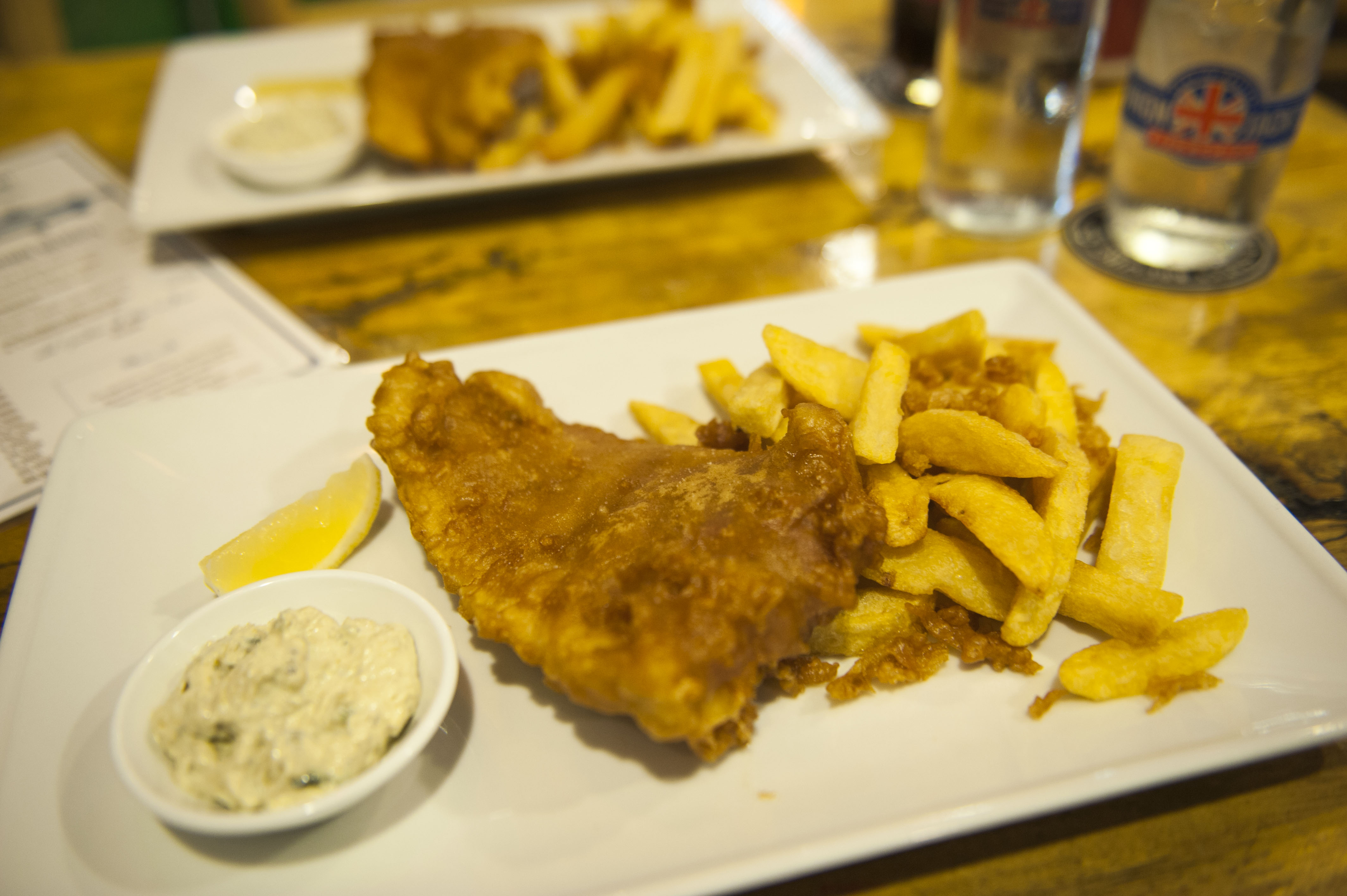 Then it’s no wonder when we come across some good fish and chips, we rave about it. Equally, when it doesn’t live up to our expectations, look out.

Which brings me to Union Jack’s Fish & Chips, a newly-opened fish and chippery in the heart of what is arguably the epicentre of Vietnamese cuisine and Vietnam’s largest city, Ho Chi Minh City. Celebrity Australian chef Luke Nguyen has restaurants here. Five-star hotels regularly hold lavish wine dinners at a decent price. You can get G&Ts with the freshest botanicals in hip cocktail bars and speakeasies dotted about the city. Ho Chi Minh City is no longer the culinary backwater it once was offering just the local fare on the streets and in small shops. So it takes guts to open up a humble fish and chip shop right in the middle of it. And the guys from Union Jack’s are getting rave reviews. 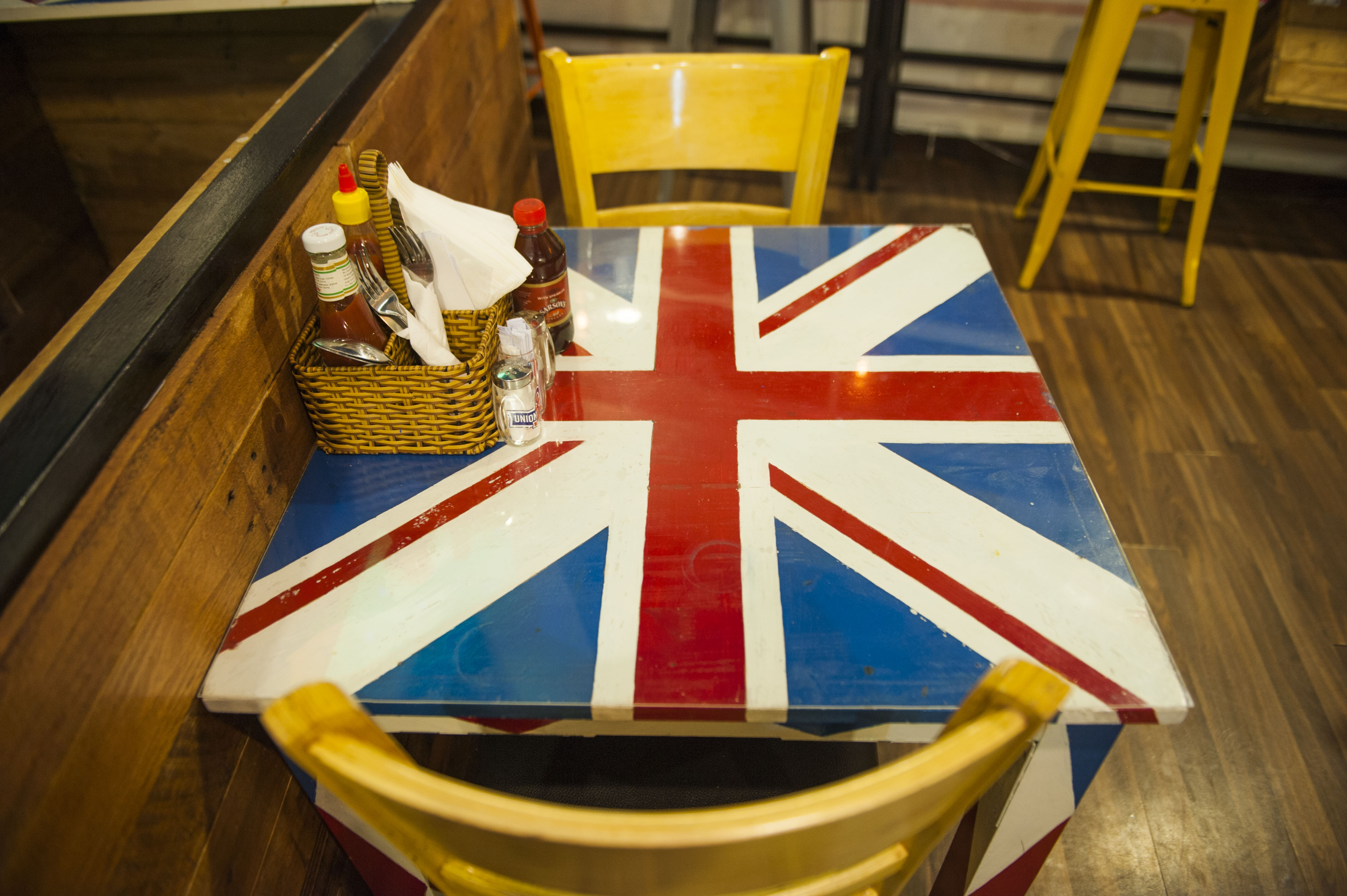 But don’t come to Union Jack’s if you’re expecting the full nostalgic walk down memory lane, unless that is, the local fish and chip shop you went to as a kid was built in a tree or a cubby house on stilts with a wonky little timber ladder. That’s what it reminded me of climbing up into the place. The narrow staircase up to Union Jack’s is made for little people who can climb like mountain goats — not aging old warhorses like me. Union Jack’s is also above a girlie bar in an area well-known for pushing the boundaries, but that does nothing to lessen (or enhance) the experience. 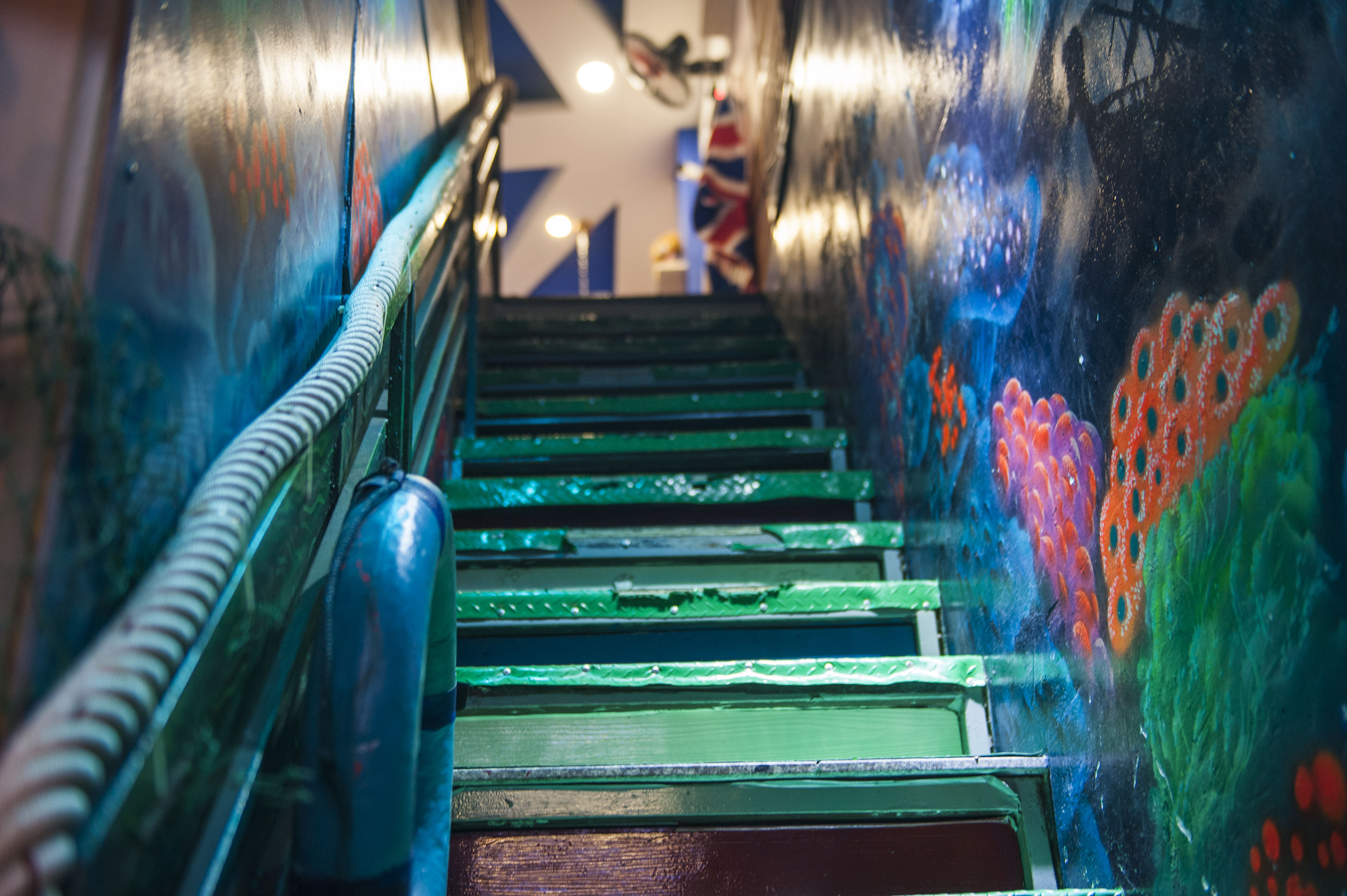 Upstairs the decor hasn’t changed much since the previous tenants — JJ’s Fish & Chips — was here. It’s all budget pine timber tables and chairs with a simple and practical decor, although the new addition of the large mural of a giant octopus enveloping the SS Alicia is very eye-catching. But if you’re looking for something hipster or some other form of gentrification, you’ll be disappointed. This place isn’t like that.

A plaque on the wall says that a young Ho Chi Minh worked here in 1913 when the Carlton Hotel allegedly stood on this very site. The chair I sat in felt like it could’ve been from the same era and with every squeak of the floorboards when someone walked by, I thought it was only a matter of time before I made an inglorious (but gleeful) entrance onto the laps of the girls in the bar below. I didn’t. So, Union Jack’s isn’t somewhere you hunker down for the evening with a nice bottle of red, sit back and chat about old times. It’s a fish and chip shop. 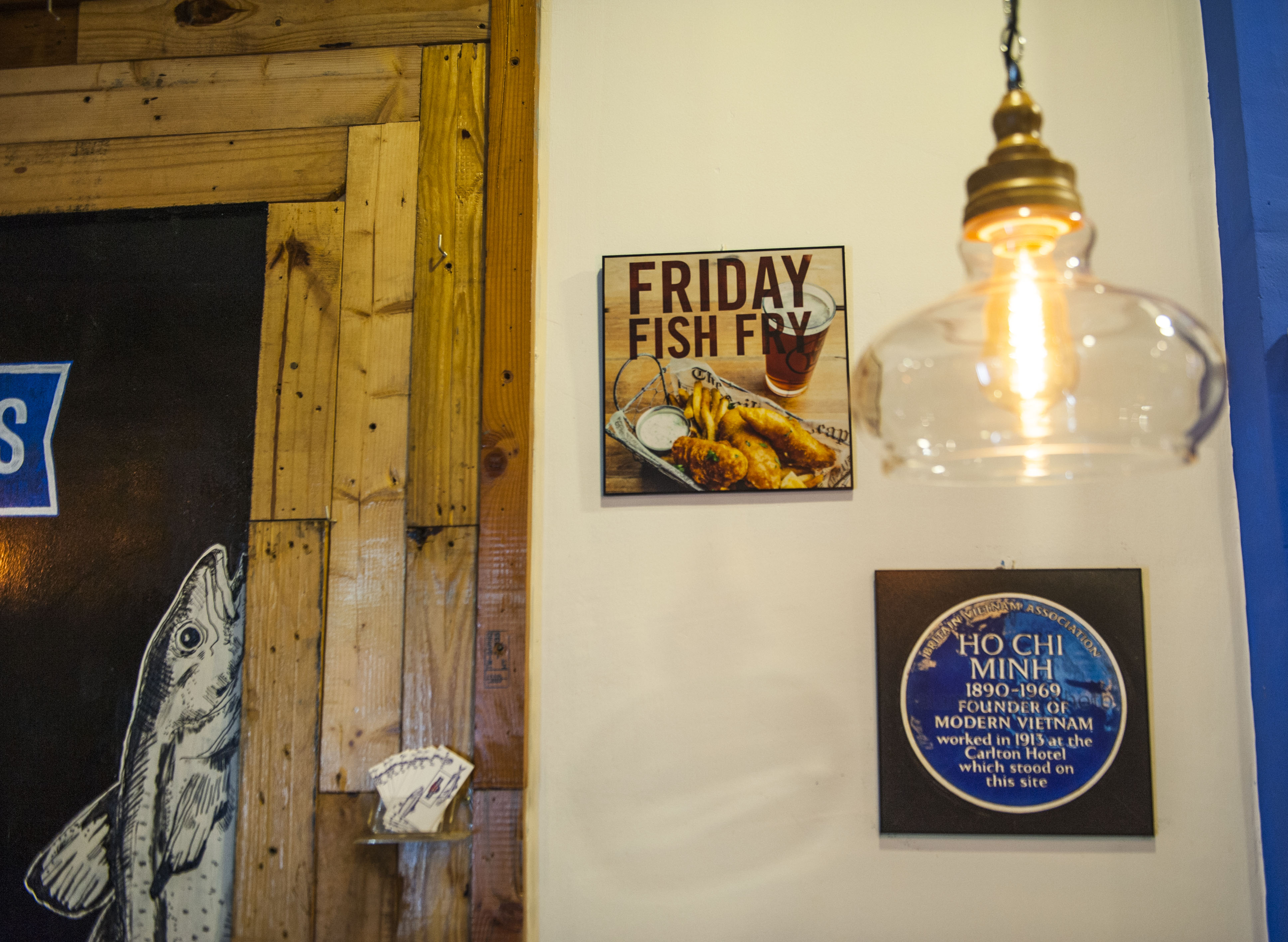 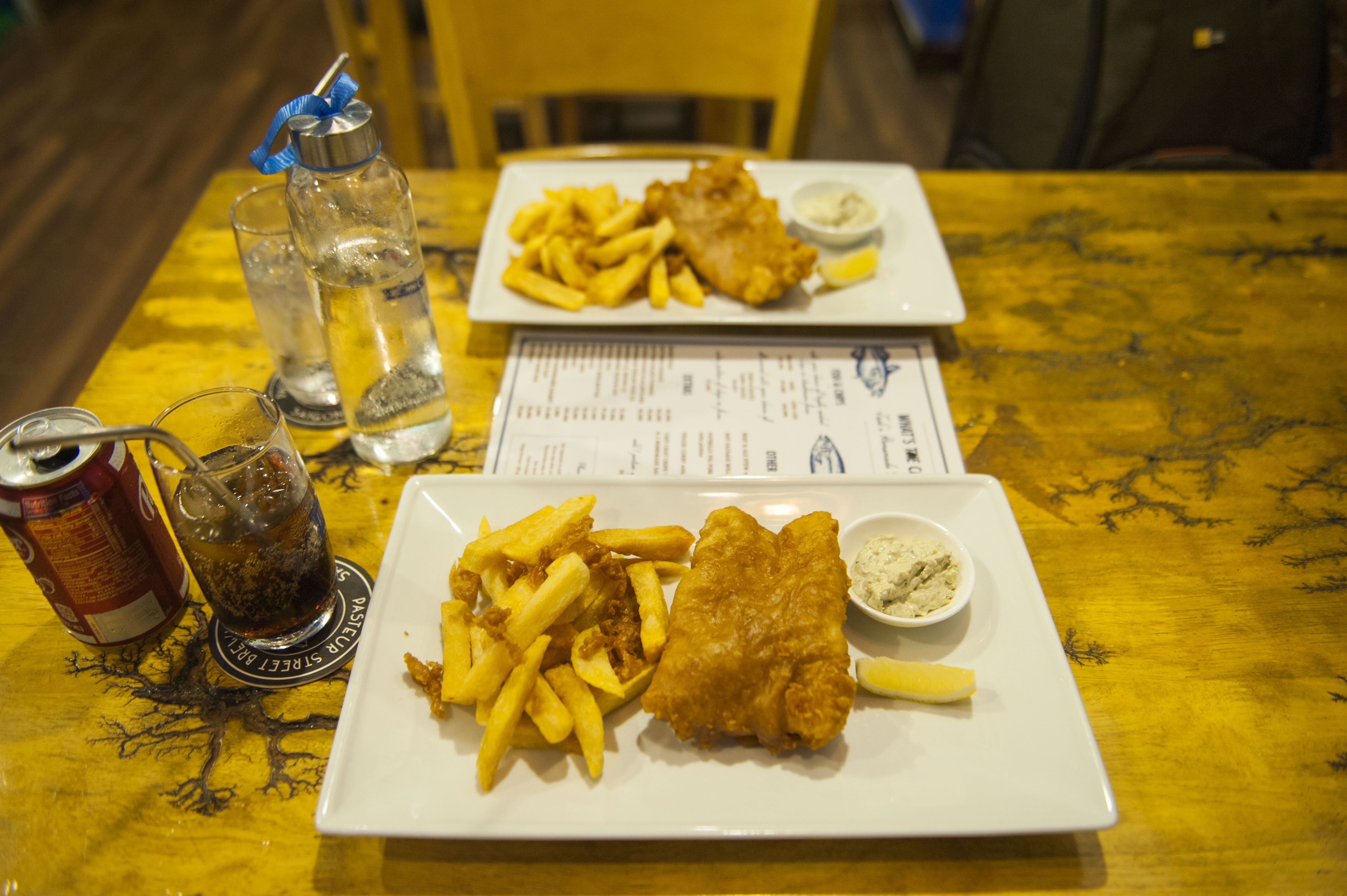 What came out was comforting, indeed. A good serving of thick chips (tasty) with two large fish fillets nicely battered, not greasy. The snapper, not a fish I’d normally eat battered, tasted fresh and was thick and white and fleshy — not a show-stopper, but there was certainly nothing wrong with it. For all its beauty fresh out of the water, snapper tastes pretty bland, especially the local variety. 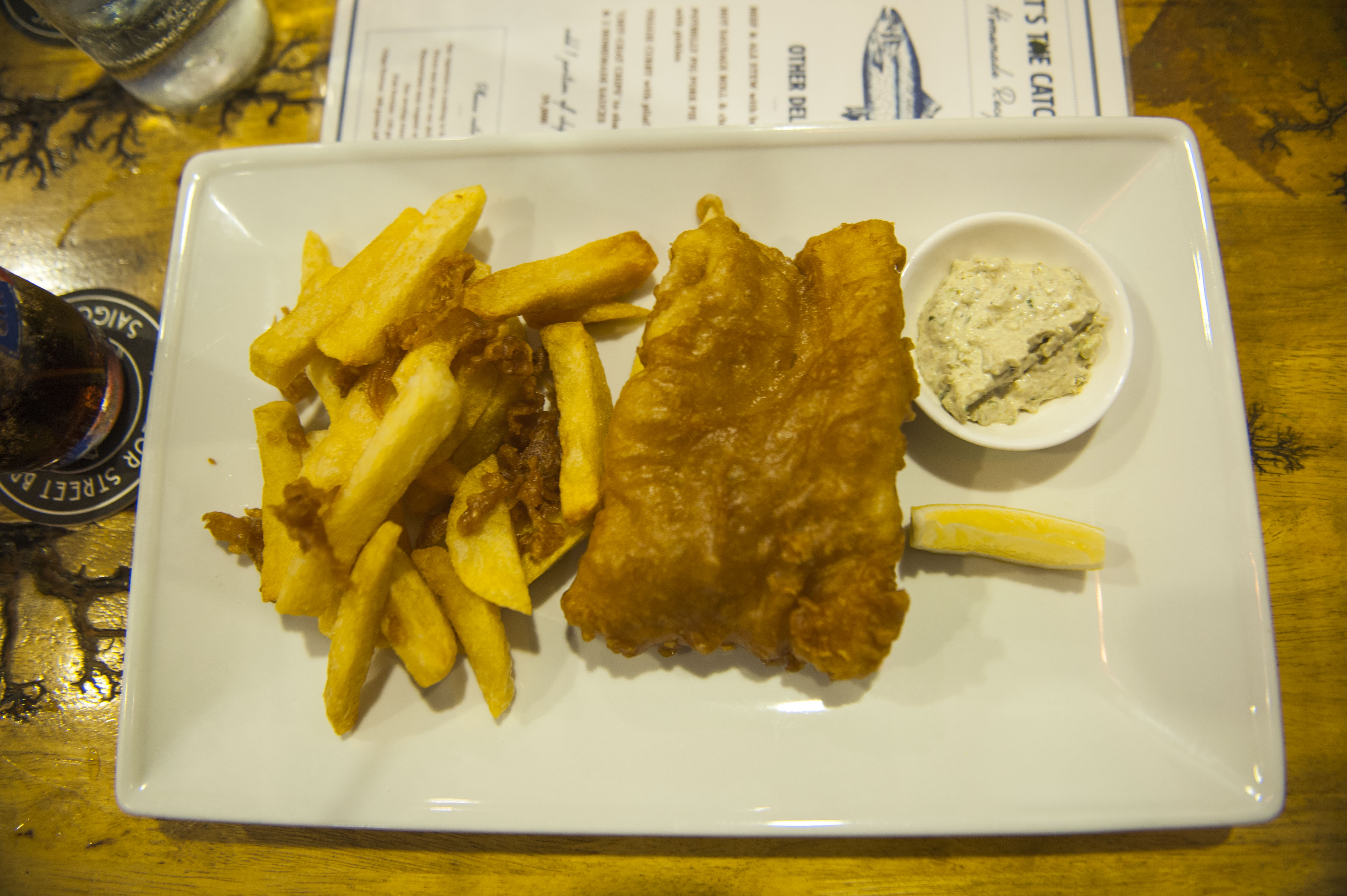 The hoki on the other hand stole the show. One bite into it took me all the way back to that kid on those cold wintery nights after football training. The difference in flavour between the two fish is stark — perhaps like the difference between a mild and tasty cheese. It’s a matter of taste. For me, I’ll take the hoki any day over the snapper. Those not into strong ‘fishy’ flavours might prefer the snapper. By all reports, the lingcod is even better. How do they get it tasting so good? Part of the reason might be that Union Jack’s uses beef dripping instead of vegetable oil during the frying process. 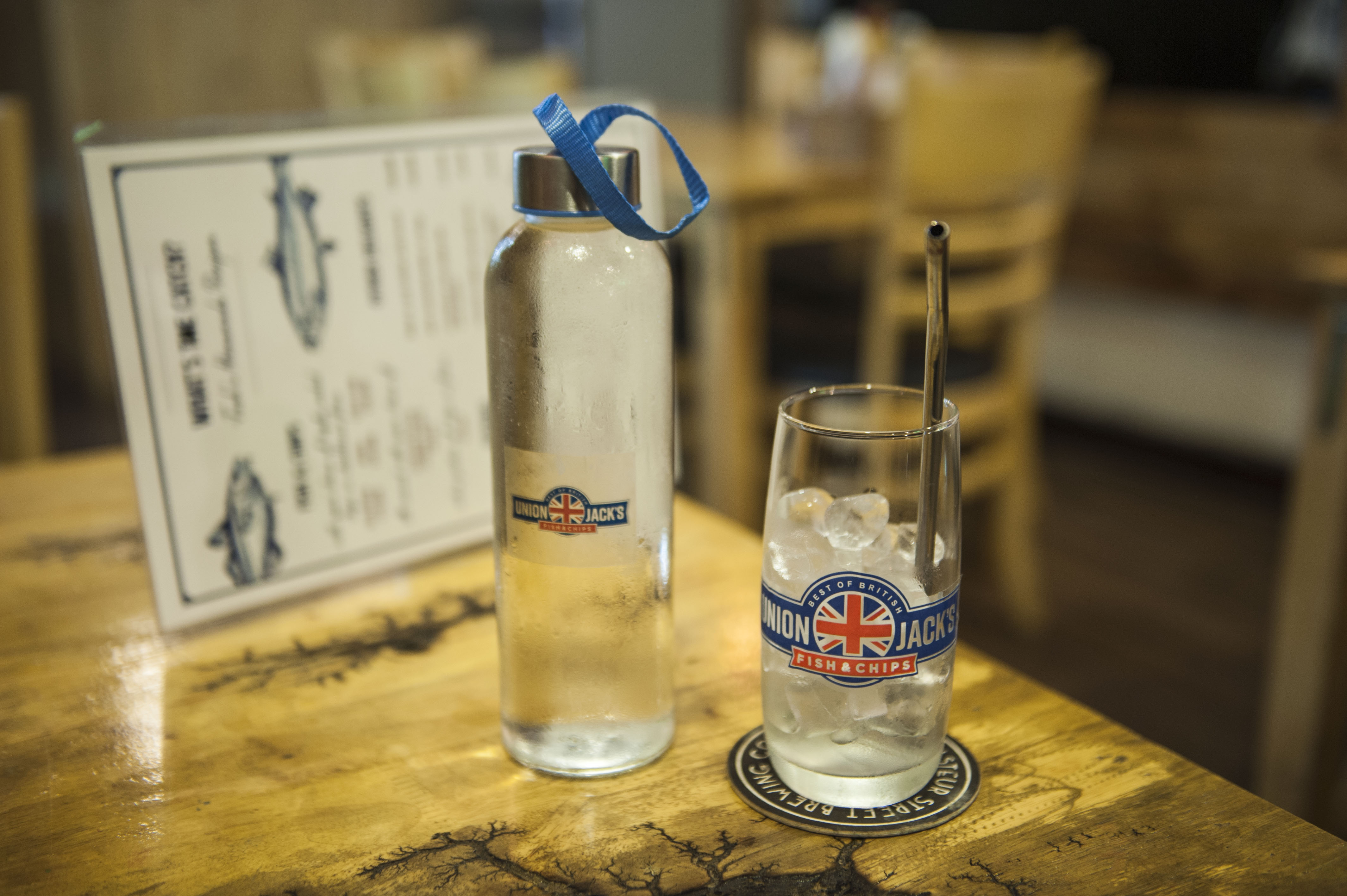 The service is friendly, effervescent even, which is a dead giveaway that this place isn’t as traditional as it wants to be. Back home, the service isn’t this good. Also, Union Jack’s is doing its bit for the environment by using refillable water bottles and reusable stainless steel straws, which helps lessen the pangs of guilt you may have (or not) shovelling another fish into your mouth dragged out of an already depleted resource. The decline in single-use plastics in the hospitality industry is gaining traction and before long, potential customers will be enquiring about it to aid in their decision making on whether or not to dine or drink somewhere. Union Jack’s is on the ball. 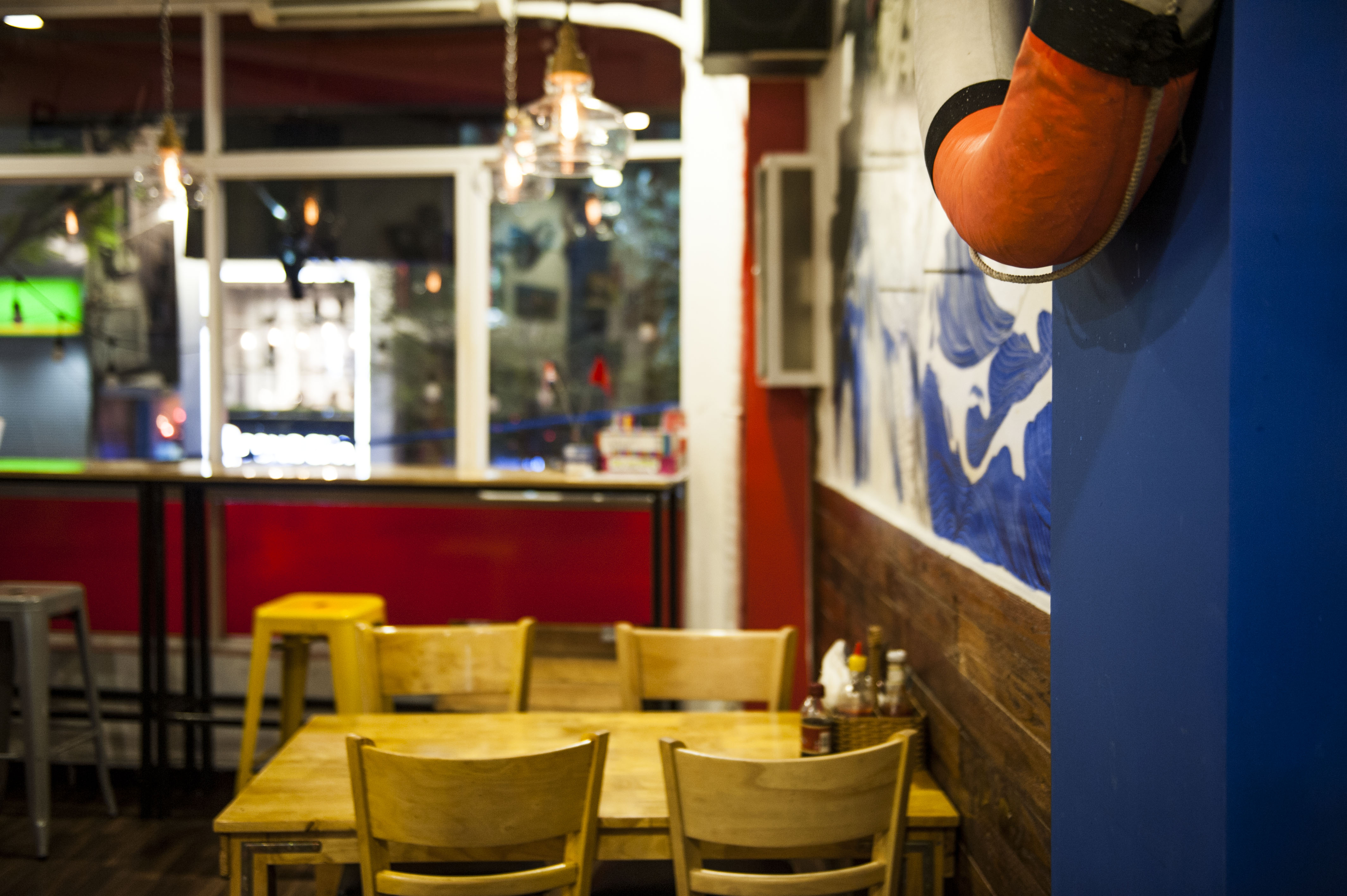 The downside to Union Jack’s? Apart from those stairs and the Kings of Leon track that looped over for about 10-minutes right after we walked in, nothing really.  If I were to be picky, the staff might have been a little over-zealous to please at times (something quite unusual), and the price might steer some pinchpennies away, but hey, who cares? They can go to McDonald’s. I’ll be back. 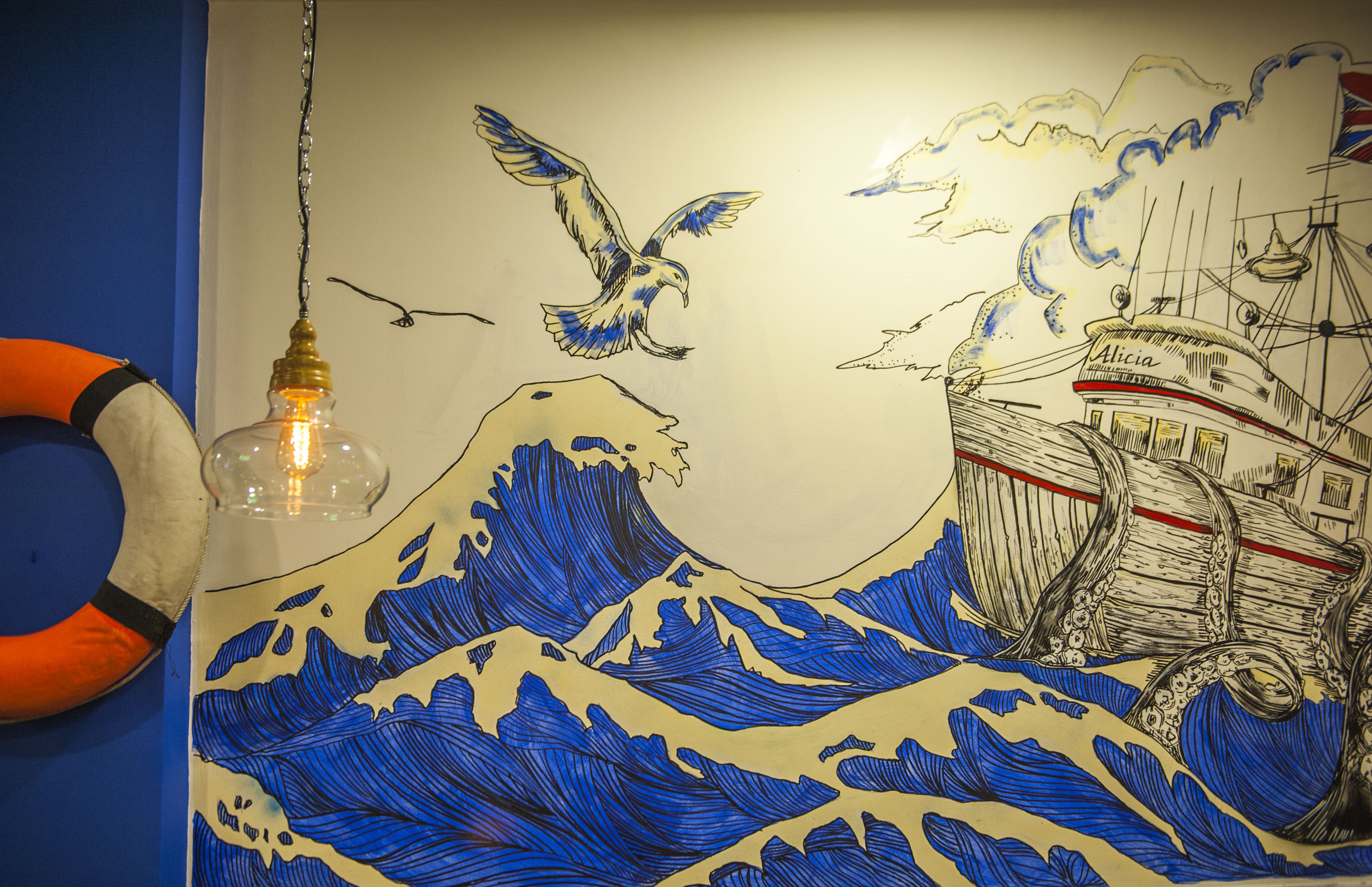 Place like this? Try Coolabah in District 7 for fish and chips

For deliveries and reservations, go to union-jacks.co

DISCLAIMER: This is an independent review. The Bureau didn’t receive money or otherwise for producing it.