It’s refreshing to talk to someone who is successful yet so self-effacing. Their humility reminds you that not everyone is just trying to get ahead at the expense of others. Saigon-based animator Fred Serra is one of those people.

“If you think my story is interesting, sure,” replies Fred when he’s approached for an interview. His reply is casual, like his attire. When we meet, he’s wearing a faded pair of denim jeans and a black t-shirt with the name of his venue emblazoned across it, Ruby Soho.

“But I like yellows and pinks. I have no problem with wearing that,” he says when asked if black is all he has in his wardrobe. “But I love red, that’s why it’s red in here.” 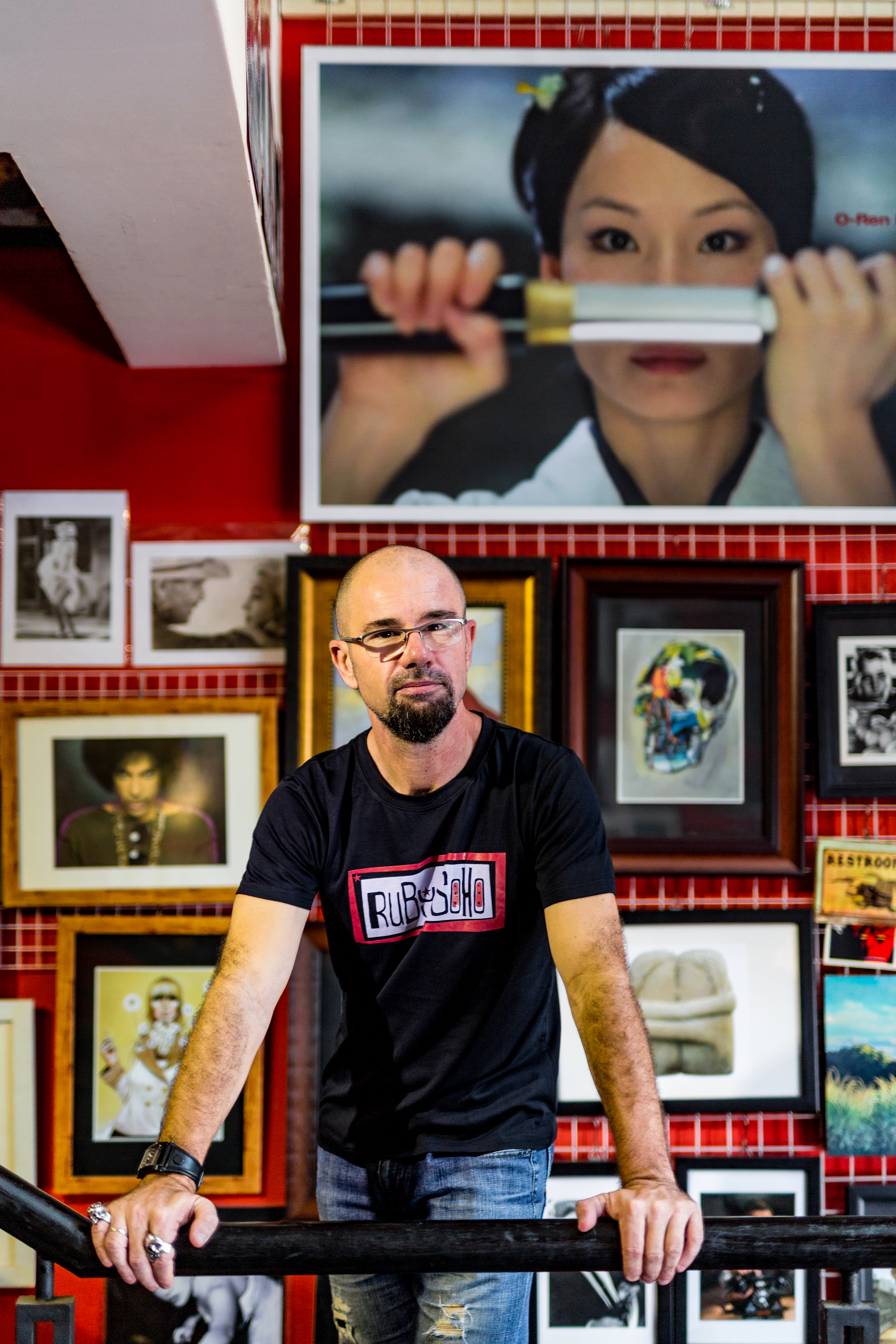 The walls of Fred’s venue are painted in a dark ruby red. Noticeably, he bears no sign of any tattoos, something unusual in this era of unabashed self-expression, not least for an artist.

“I’ve been working on a full back piece actually. I don’t see the point of having one tattoo here and one there. I want something that tells my story,” he says.

If that’s the case, Fred is going to need one very large tattoo.

“I usually get around six hours sleep per night. I don’t like to sleep too late. I’m always on the go,” he says.

“If I find out someone really likes something and they come here all the time, I give it to them”

Ruby Soho, where we meet, is a place that Fred set up not just as a bar, but as an extension of himself, for himself. There are scores of photos and posters from movies and television series on the walls of both floors of the place that he set up initially with a friend and named after a song by one of their favourite bands of all time, 90s American punk rock outfit, Rancid.

“It’s more for me and my toys. I change it all the time and I try to show what I like and who I am. I hope people like it.” 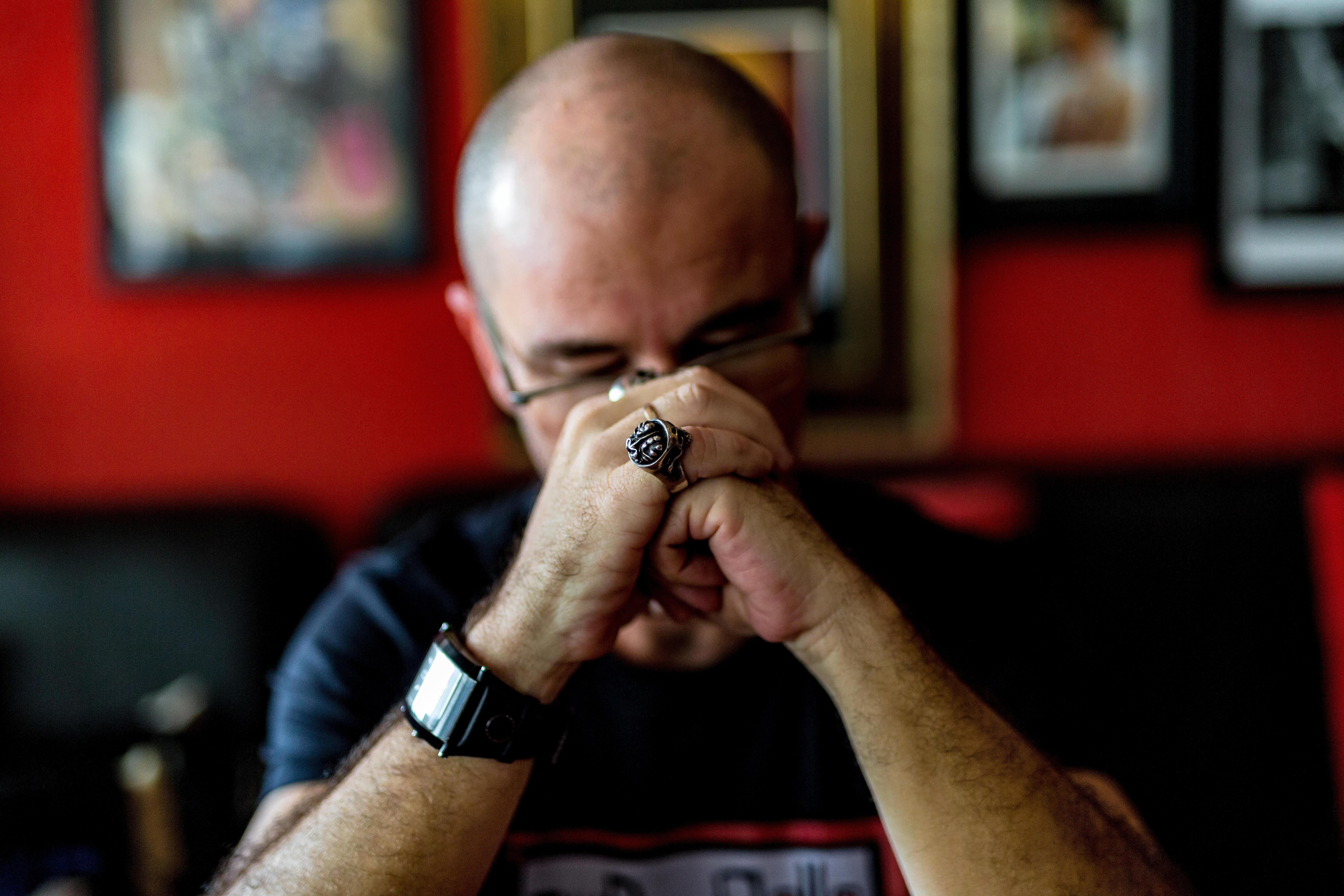 Indeed, people do like it. At times, people ask Fred to sell stuff to them, but nothing is for sale at ‘Ruby’ as he calls the place. It wouldn’t be right.

“If I find out someone really likes something and they come here all the time, I give it to them.”

When he does give an item to a lucky customer, or when he decides that Ruby needs a makeover, the space is filled with other photos or posters from his stockpile at home.

“I have thousands and thousands of images lying around my house,” he says.

It’s something that has caused his wife much consternation over the years. She thought his collection would be limited to his space only.

“I love every kind of image. It’s not just animation and fun, it’s about music, photography and cinema, so my inspiration comes from everywhere, especially cinema and comic books. I try to find them online, anywhere, it’s just a question of finding the right ones.”

Fred looks across the bar which is lit up by the iridescent blue lighting beneath it and points to the wall behind me.

“Something I’ve noticed recently is that all the images have a similar theme,” he says.

Something he says that wasn’t planned.

“Over time, I’ve noticed that the images I buy are all different, but they all go together, somehow they match, they work together and they combine to create the image of this place. It’s a little kitsch. Do you say that in English?” 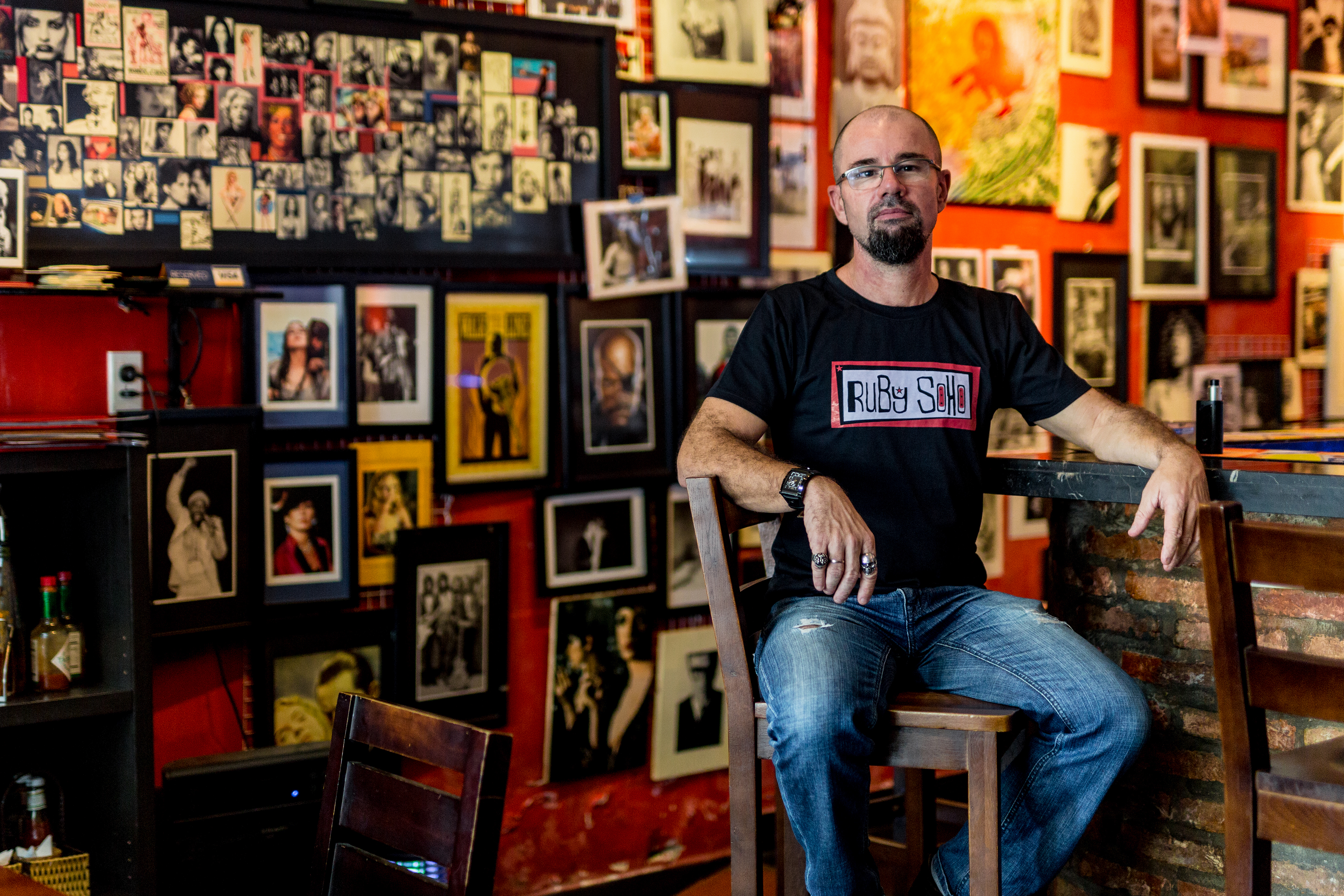 Now 48, Fred is a father and happily married to a Vietnamese woman who he met 16 years ago when he was first sent to Vietnam briefly by the French animation company he was working for to oversee the quality of animation production at their studio here.

“I was in my early thirties and I loved the energy of this country,” he says.

It wasn’t the first time Fred had lived abroad. He had lived and worked in China and South Korea, supervising animation projects for television and feature movies prior to coming to Vietnam, something quite common in an industry where the creation, storyboarding, and design is mostly done in America or Europe, and then shipped to Asia for final production to keep costs down.

“Vietnam isn’t really the best place for animators though, because we don’t have a lot of studios here,” explains Fred.

“I’ve created a lot of characters for companies in my life, but not for me yet”

Although the 3D animation industry is growing rapidly in Vietnam, 90% of the animation work done here is 2D, which is best suited for television and comic books. It’s the type of animation that has given Fred a name in the industry the world over, including in Vietnam. His work in producing Oggy and The Cockroaches, an animated cartoon television series popular with children internationally, has won him many fans, with some even tracking him down to meet him, something he attributes to a very proud daughter.

“Sometimes adults come into Ruby Soho looking for me and say, ‘You’re the creator of Oggy and The Cockroaches! I heard this from my child.’ And I say, ‘Um, no, I’m just the designer.’ But sometimes Olivier Jean Marie the creator of Oggy and The Cockroaches drops by to see me. He’s a very creative person, he never stops. He’s 55 years old with the energy of a 25 year old. He’s a very interesting personality and creator.” 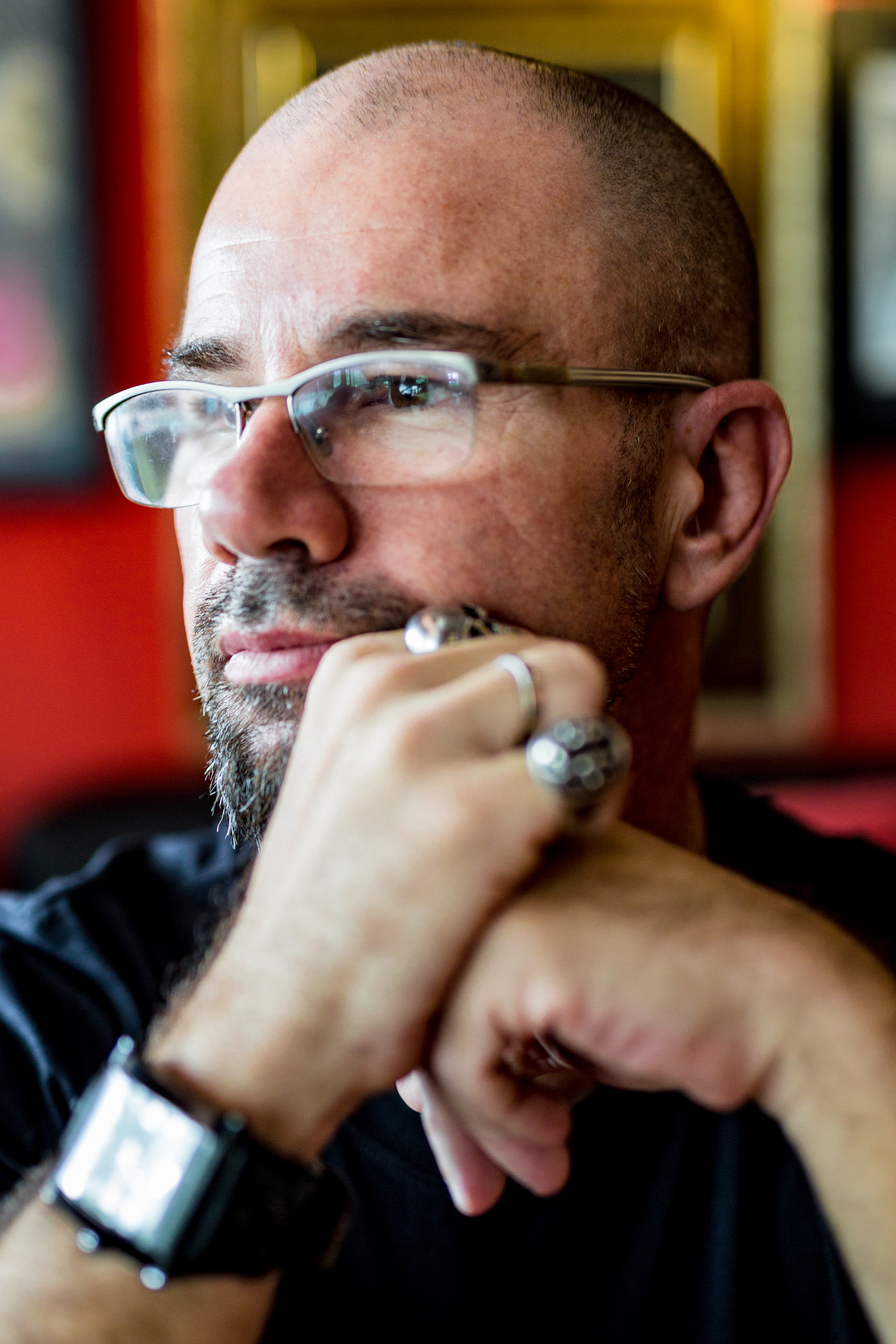 Fred’s experience in Vietnam has made him the foremost animator for studios in Europe and America to approach for projects. To have one of the biggest names in animation like Olivier Jean Marie coming to hang out with him is quite an endorsement and confirms his status in the industry.

Although he stopped working almost 12 months ago for Armada TMT, the largest animation studio in Vietnam, Fred is still very much involved in the industry and is working on a project to establish his own arts school. He’s hoping his venture will improve the quality of graduates entering the animation industry in Vietnam, of which he estimates there are hundreds of people working in animation in Saigon alone.

“And that’s just in the animation industry. If you include the design industry as a whole, it could be thousands of people just in Saigon,” he says. 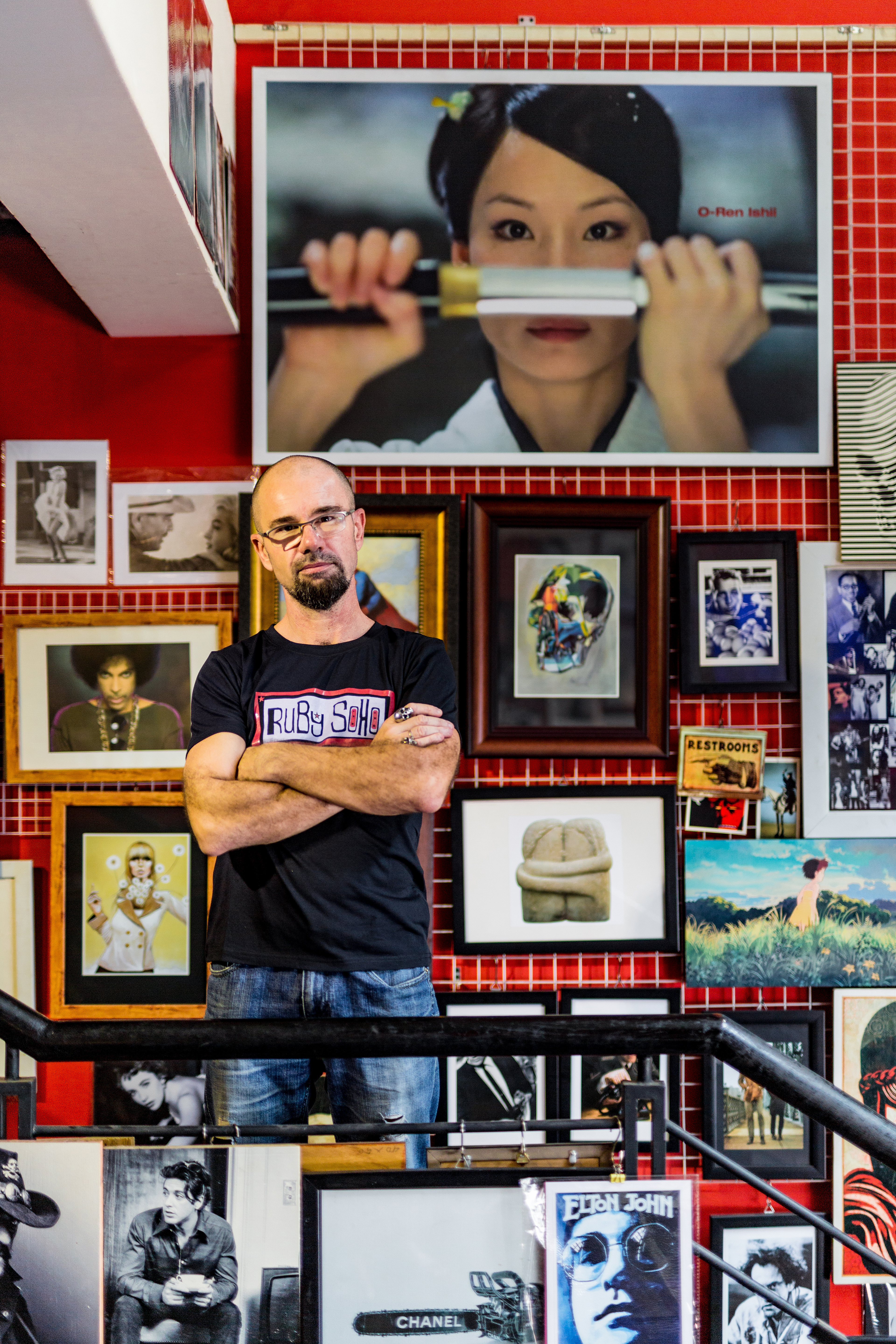 While the arts industry is growing fast in Vietnam, there aren’t currently any schools solely for animation which means that when young designers finish art school here, studios need to spend 12 months training them, which Fred says is costly.

“During my 13 years in the industry here, we were looking for designers all the time, and we could never really find what we were looking for,” he adds. “All of the studios have the same problem, so I think a very good art school is necessary here.”

For the time being, Fred is content in Vietnam and has no plans to move back to France any time soon.

“I love this country. I think it’s my place,” he says, peering back through his trademark thick eyeglasses. “If I went back to France, I wouldn’t have this kind of freedom to be creative.”

It’s clear that Fred still has a lot of unfinished business to tend to, even after all these years. At an age when perhaps most people might be thinking about slowing down a little, it seems that he’s only just getting going.

“I’ve created a lot of characters for companies in my life, but not for me yet,” he says. “I have a superhero in mind, a girl, but I want her to represent the essence of this country, someone that has a combination of the traditional, historical, and the energy of now. She has to be someone that would make the Vietnamese proud.”