A message comes through on my phone. It’s from Italian tattoo artist Massimiliano Freguja who’s in town visiting his friend and fellow World Atlas of Tattoo inductee Danis Nguyen in Saigon. There are just 100 tattoo artists of thousands globally who earned the right to be included in Anna Felicity Friedman’s 400 page tome published in 2015 that recognises the most significant practitioners in the history of tattooing. Entry affords artists Michelin star-like acclaim within the tattoo industry and it’s a rare opportunity to have two entrants in the same room together in Vietnam. Here’s my chance to rub shoulders with tattoo royalty.

“I’m about to start on Danis,” the message reads.

Ahead of time we had arranged that when Massimiliano — or Crez as he’s more widely known — was ready to lay down the stencil for the tattoo he was giving Danis as a wedding present, the message would be my cue to get to Saigon Ink and see him give his friend one of the more unusual gifts I’ve seen — a tattoo of a bull’s head on the chest.

Growing up, Crez didn’t get to see his merchant sailor father as often as he would have liked, but his father still left a lasting impression on him mostly because of what he had tattooed on his body — an eagle and a tiger —which his father got inked on board his ship once when it was docked in India.

“He was the only person I knew who had tattoos, but I was fascinated by them…”

“He regretted getting those tattoos,” says Crez over the buzz of his tattoo gun. “He was the only person I knew who had tattoos, but I was fascinated by them and the stories he told about his travels around the world.”

In those days, when ships would dock, tattooists would climb up onto them with their equipment, tattoo the sailors and receive a lobster or some other catch of the day as payment.

“I was fascinated by that story, firstly because it was in India, somewhere far off I didn’t know, and secondly, because of the little guy with a suitcase and his gear in it going to tattoo all the sailors, it was really magical for me.” 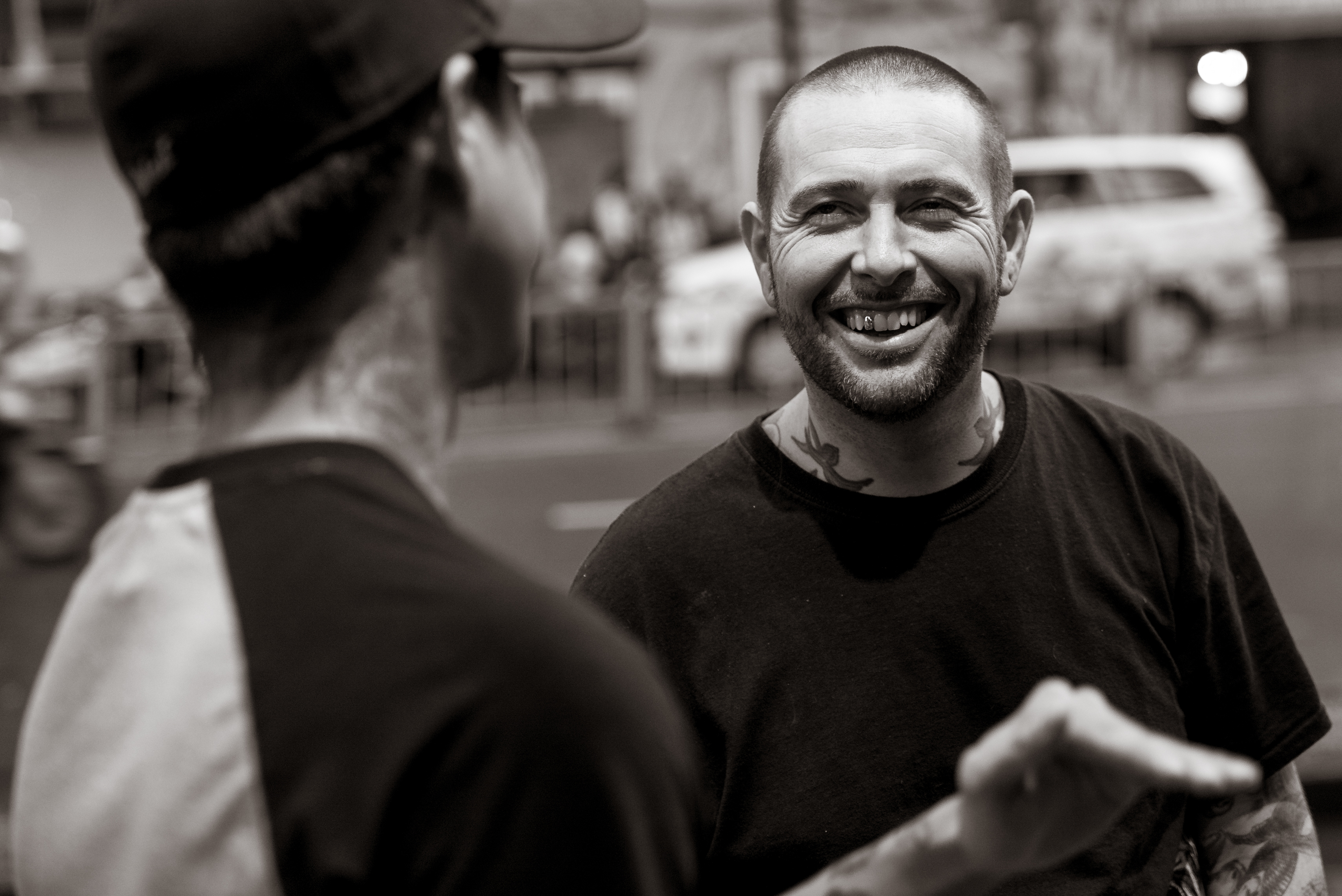 Crez soon made up his mind as to what he wanted to do with his life. By the time he was nine years old, he had already given himself a tattoo and when he turned 17, he started tattooing professionally at a time in Italy when tattoos were seen as markers of petty criminals and what he endearingly calls “white trash” — the dregs of society.

“I tattooed punk rockers, drug dealers and small-time criminals but not the mafia”

“I tattooed punk rockers, drug dealers and small-time criminals (not the mafia he says because they didn’t want to draw attention to themselves). It was a time when if you wanted to demonstrate being outside of mainstream society and how much you disliked it, you got a tattoo,” he explains. “Now it’s different, people get tattoos to be part of a group, it’s fashionable to have one.”

Crez has developed a reputation for being a traditionalist, something which prompted his compadre Danis to get in contact with him when he was holidaying in Venice a couple of years ago.

“He only does classic tattoos in an era where artists are mixing styles — I respect that and that’s why I wanted a tattoo from him,” says Danis during a break in receiving his wedding gift.

“…tattoos need to have a soul, we aren’t just canvasses, we’re human.”

Crez has equal amounts of respect for Danis in return.

“Danis impressed me immediately. Here was a guy from Vietnam asking around my neighbourhood for me,” he recalls. “I live in the ghetto of Venice in a place called Marghera, so when someone bothers going there (Crez paints a picture of a neighbourhood entirely opposite of the romantic images of Venice with its canals and gondolas) and wants to talk to me, why not? Let’s see what you want.” 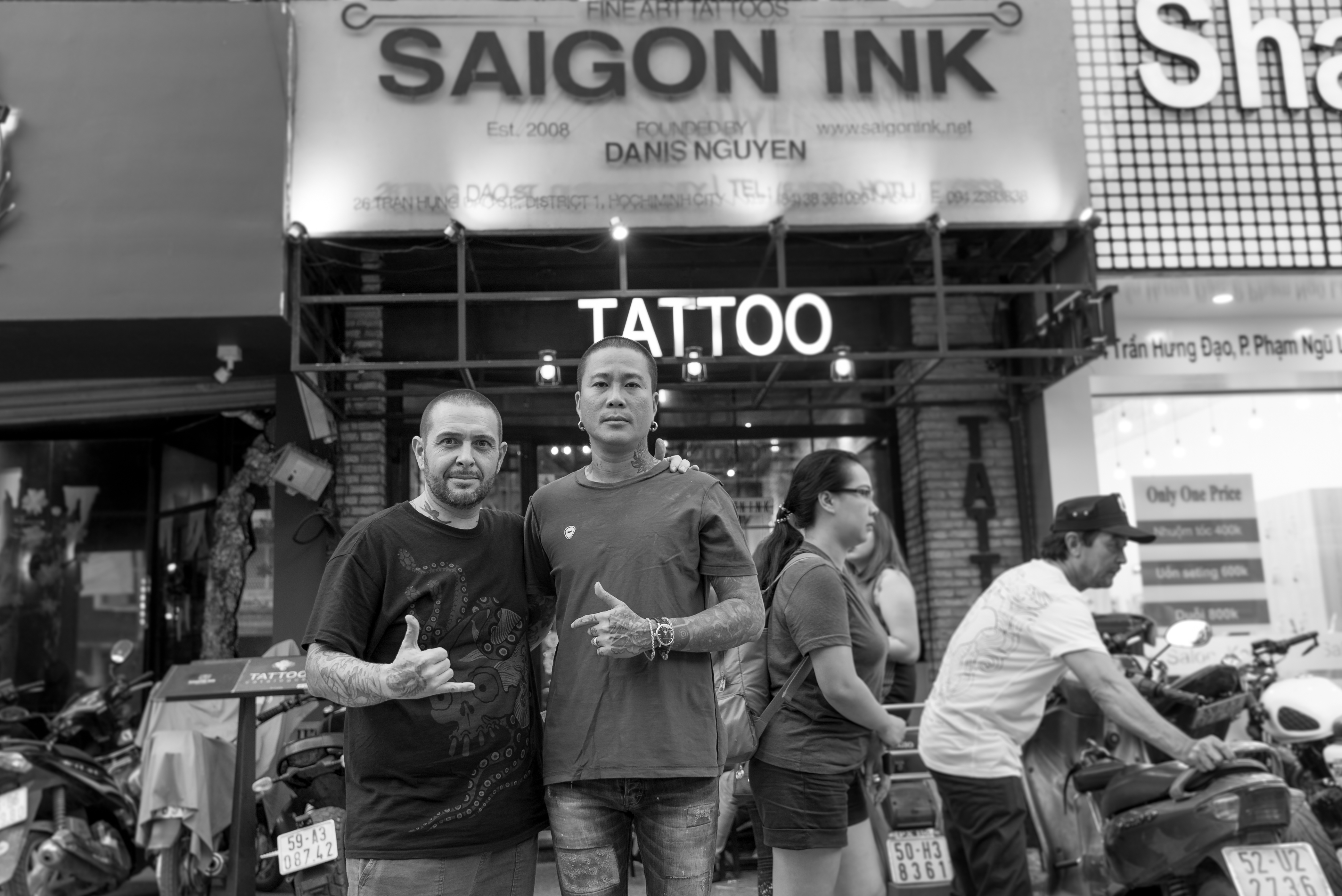 When he’s not working in his own studio, Crez spends a month or so every year in Japan, something he’s done since 2003, and it is where he met the late Hideo Kakimoto, better known as Horihide, considered the master of Japanese tattooing. In his lifetime, he’s credited for doing more than 600 bodysuits (full-body pieces), was arrested numerous times (tattooing is outlawed in Japan), and passed on to Crez the spirit of tattooing which involves an exchange of energy between client and tattooist.

“There are many tattooists who are technically very good artists and can produce great, colourful portraits, but tattoos need to have a soul, we aren’t just canvases, we’re human,” Crez explains. “Getting tattooed by someone like Horihide is a life-long experience because you carry it with you for the rest of your life and I adhere to that philosophy.”

This is something that Crez sees catching on here in Vietnam, too.

“I’ve been in Vietnam for just a few days and what I’ve noticed is that unlike in many other parts of Southeast Asia where tattoos are just for tourists, here it’s a real culture and you can get world-class tattoos done in places like Saigon Ink.”

Saigon Ink is at 26 Tran Hung Dao Street, District 1, HCMC and is open daily 9am to 10pm. For more info, go to their Facebook or website